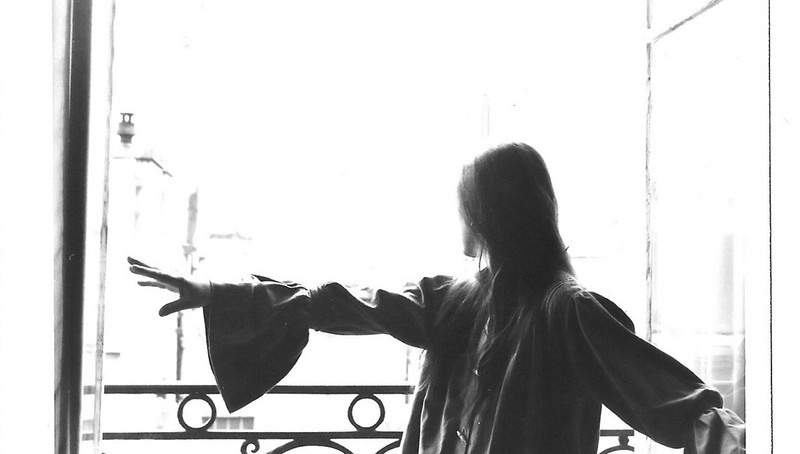 Kerlin Gallery is pleased to present Karen, an exhibition of new film, sculptural, photographic and print works by Mark Garry.

As a dialogue between the personal, the historical and the political, Karen marks a subtle, yet significant departure within Mark Garry’s practice. Central to the exhibition are three large- scale silkscreened prints that depict a repeated image of Karen Dalton, the tragic Cherokee folk singer from the 60s. Dalton’s delicate figure has her back turned to us, face obscured, her arm outstretched as if pointing to something that remains unspecified and out of our sight.

This physical reach for the unattainable is echoed in Garry’s new film, Bridges Burned and Backs Turned. Against an impenetrable darkness a tiny white feather begins to fall repeatedly. Being caught and held for the briefest of moments. Elsewhere in a series of new photographs  the darkness is violently interrupted by the irrepressible vigour of the brief magnolia blossom.

Through each of these works and a series of new freestanding sculptures entitled History Windows, Garry weaves together ideas of loss and estrangement, and a muted sense of sorrow, resonating from the subjective, to a wider reflection upon civic care. Here is the suggestion that as individuals and again collectively as a nation, modern Ireland has repeatedly failed itself on many levels, through a lack of consideration, patience and co-operation. These human values are physically embodied by Garry’s artworks themselves, be it within the processes of their making, or in their inherent structure. His works are measured and quiet, often requiring meticulous systems of construction and collaborative practices. They combine physical, visual, sensory and empathetic analogues, creating arrangements of elements that intersect spaces, forming relationships between a given room and each other.

Mark Garry’s practice is research-based and often embedded in music and musicology. Characteristics of this cultural field act as means for the artist to observe how certain historical, geographical and sociological forces have combined, shaping the contemporary psyche over time. With a lightness of touch, this line of research permeates the exhibition Karen. As the critic Declan Long has noted, “Mark Garry’s art thrives on a potential for connectibility: his is a hugely hospitable manner of practice, open to new collaborations and new translations between forms and ideas...These are tentative, tender realistions of evolving ideas: fragile forms based on unorthodox affiliations.”