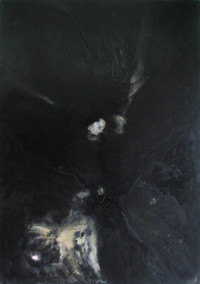 The kestnergesellschaft presents by showing the exhibition back to black a unique diversity of works to analyze the significance of black in contemporary painting. It was only at the beginning of the twentieth century that black was again accepted as something real and substantial. As late as the eighteenth and nineteenth centuries, it did not exist from an academic perspective and was even looked down upon. The painterly issues pursued by such artists as Velázquez, Rembrandt and Frans Hals were simply ignored.

Nevertheless, the handling of the possibilities presented by the color black has long been taken on as a challenge by many painters, and not only because of its symbolic meaning. The black square of Malevich represents an incunabulum of modernism. Black is the absence of colors. But perception is more difficult, because black scarcely gives rise to contrasts. After the impressive exhibition of the »Black Paintings« in the Haus der Kunst in Munich featuring Frank Stella, Ad Reinhardt, Mark Rothko and others, we intend to focus on contemporary artists who turn their attention to the topic of black paintings. Whereas the artists of the New York School all subscribed to abstraction, the investigatory focus on the color black in the exhibition back to black is not limited to abstract, non-figurative pictures, but is also visible in figurative painting as well as in an intermediate form which we call abstract realism. The exhibition will present twentyone international artists of the younger generation. These include: