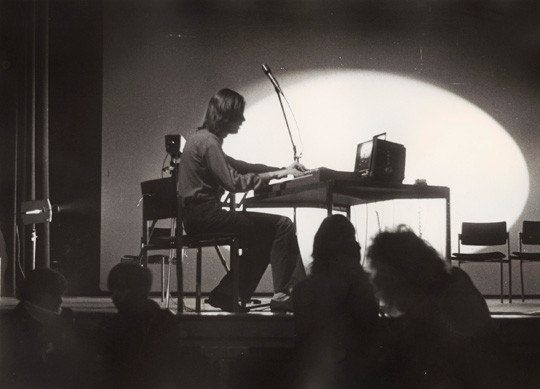 Erkki Kurenniemi has been recording his life and environment continually for years, with great accuracy and precision. He has a vision of an online virtual Erkki Kurenniemi, to be presented in 2048. The virtual persona would be based on all the documentary information Kurenniemi has collected during his life – photographs, videos, diaries and drawings – which will be downloaded to provide content for the online persona's mind.

Towards 2048 presents material from the personal archives of the Finnish pioneer of electronic music as well as early media art from the Kiasma collections. The show also includes a range of DIMI digital music instruments designed by Kurenniemi.

In his book Retromania: Pop Culture’s Addiction with Its Own Past, the English music historian Simon Reynolds describes Kurenniemi as a Finnish hybrid of Karl-Heinz Stockhausen, Buckminster Fuller and Steve Jobs. Kurenniemi is a pioneer of musicology and of computer and media culture, a person who designed and built his first electronic instruments as early as the late 1960s.

Kurenniemi donated a large part of his extensive archives to the Central Art Archive in 2006. The donated material was used to build an online Erkki Kurenniemi site that offers the public an opportunity to read the electronic publication Erkki Kurenniemi – A Man From The Future, and learn about Kurenniemi’s thinking and the salient points of his career.

The Pneuma festival in Kiasma Theatre in November includes both films and performances of Kurenniemi’s compositions arranged for acoustic instruments.
The exhibition is produced in cooperation with the Central Art Archives and the Department of Musicology at the University of Helsinki.
www.kiasma.fi