Time of the Storytellers 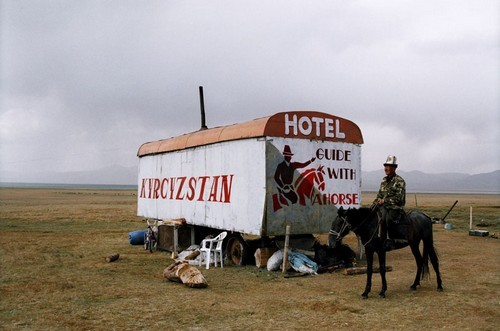 TIME OF THE STORYTELLERS

Time of the Storytellers presents contemporary art from post-Soviet regions reaching from the eastern borders of Europe right into Asia. The artists represented demonstrate many ways of interpreting their ‘common past’ during the Soviet era together with its impact on the present, where the distant past is also being reprocessed as an element in the shaping of a new national identity.
Due to geography and their rich natural resources, many of these countries are a target of keen political and economic interest. The formation of a new national identity in the region is informed by a rich cultural tradition, steeped in the nomadic lifestyle, shamanism, as well as in Islam. The Soviet heritage and new Western influences are also present. All these influences emerge in the work of contemporary artists. Their works make a conscious break with exotic oriental stereotypes, on the one hand, or, on the other, deal with topical political or social themes.
The exhibition is assembled by Moscow curator Viktor Misiano.
www.kiasma.fi