Wind from the East 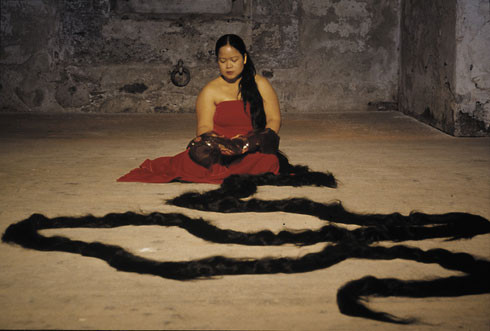 © Melati Suryodarmo
The Promise Lupaus, 2002
WIND FROM THE EAST

For Kiasma’s Wind from the East exhibition, we have chosen contemporary artists who weave old and new, East and West, myths and reality and change and permanence into a rich web in which opposites interact. The exhibition does not propose an overview. Instead, it offers a considered and focused selection of impressive works of art by artists who deal with topical and relevant issues.
Rapid changes and expanding economies are forcing Asians to adjust to new social and economic realities. But is our own understanding and knowledge of these distant places really any more pro- found than that garnered on holidays or the ephemeral stories of the mass media? The exhibition Wind from the East focuses on three Asian countries where change has been parti- cularly rapid: Indonesia, China and Thailand. Although they have different cultures, political cli- mates and religions, they all have strongly expanding economies and struggle with environmental and social problems, including human rights issues. Huge populations and mass migration to large cities pose challenges to environments and economies alike.
New biennials, Contemporary Art museums and art centres emerge everywhere, also in Asian area, and the artists with the best international contacts and networking skills are most likely to succeed or win recognition in the art world. Native cultures and Western influences often clash. The collision between strong, vibrant traditions and rapid change may indeed seem like a threat, though it may just as well be an opportunity.
The artists in the exhibition are Heri Dono, Eko Nugroho, Melati Suryodarmo and Entang Wiharso from Indonesia, Chen Zhen, Hu Yang and Yang Zhenzhong from China and Araya Rasdjarmrearnsook from Thailand. Their works use the methods of Contemporary Art to deal with political issues, individuals at the mercy of the market economy, the parallelism of the spiritual and the material in the world, and the encounter between cultures.
www.kiasma.fi