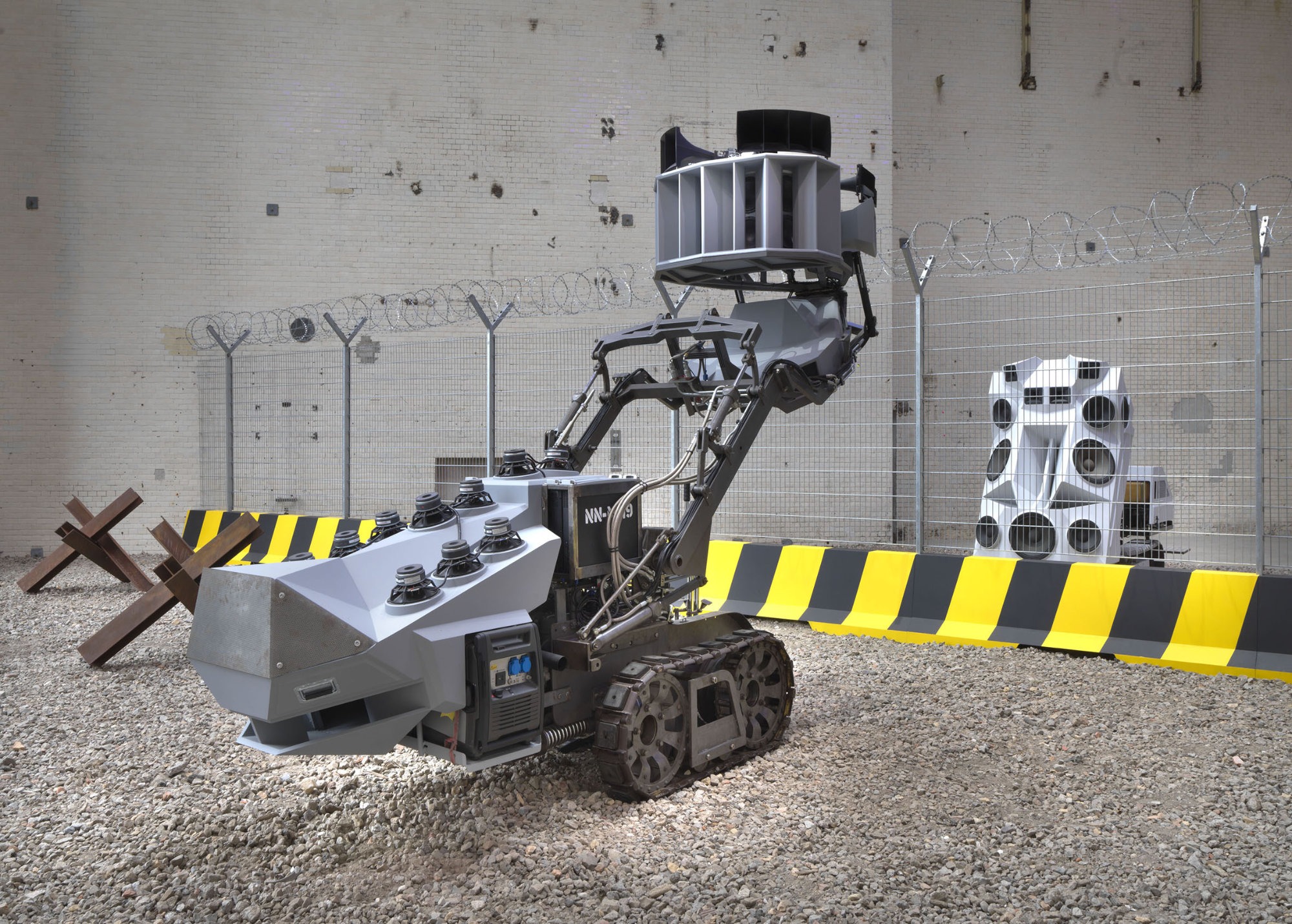 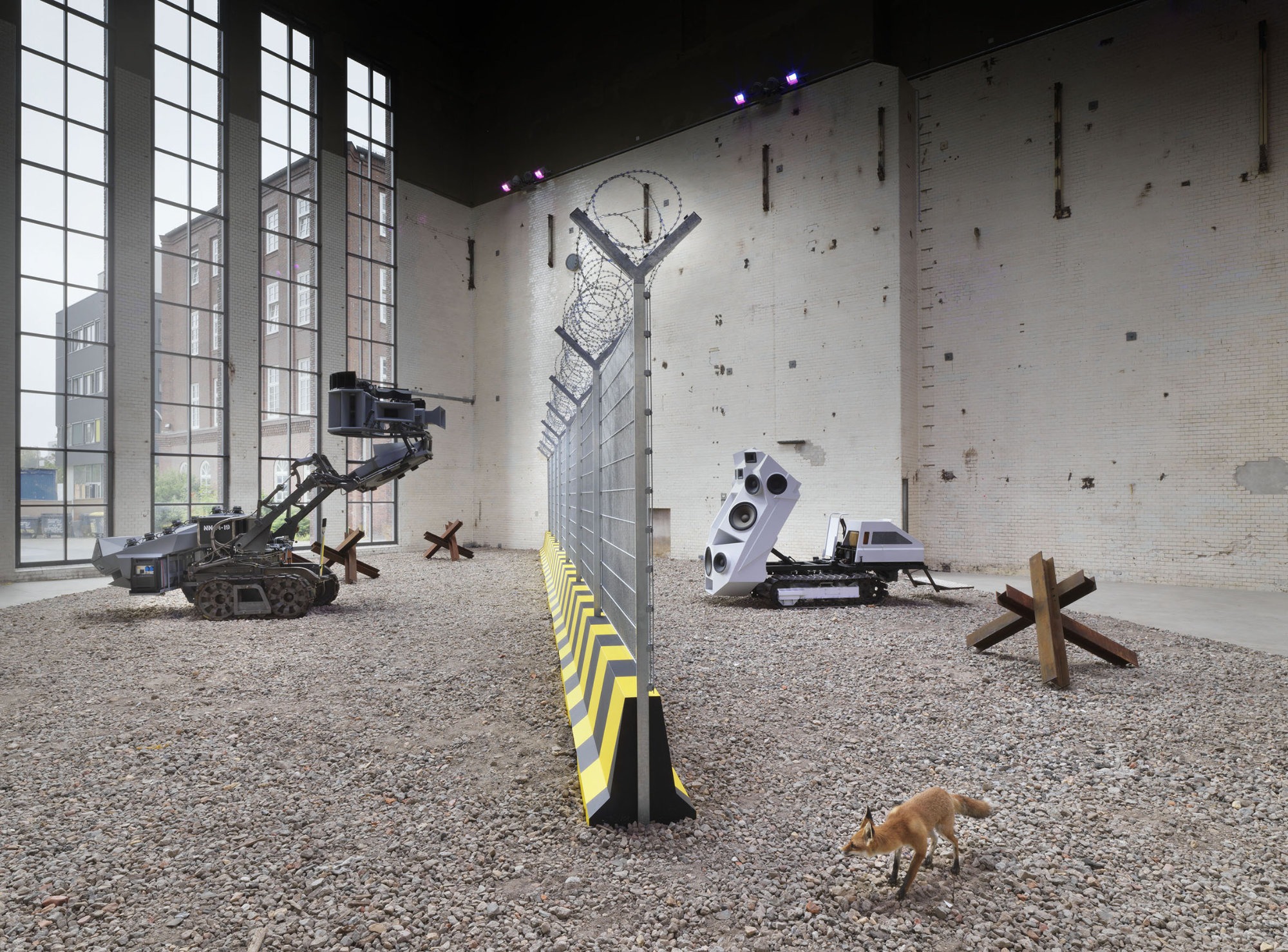 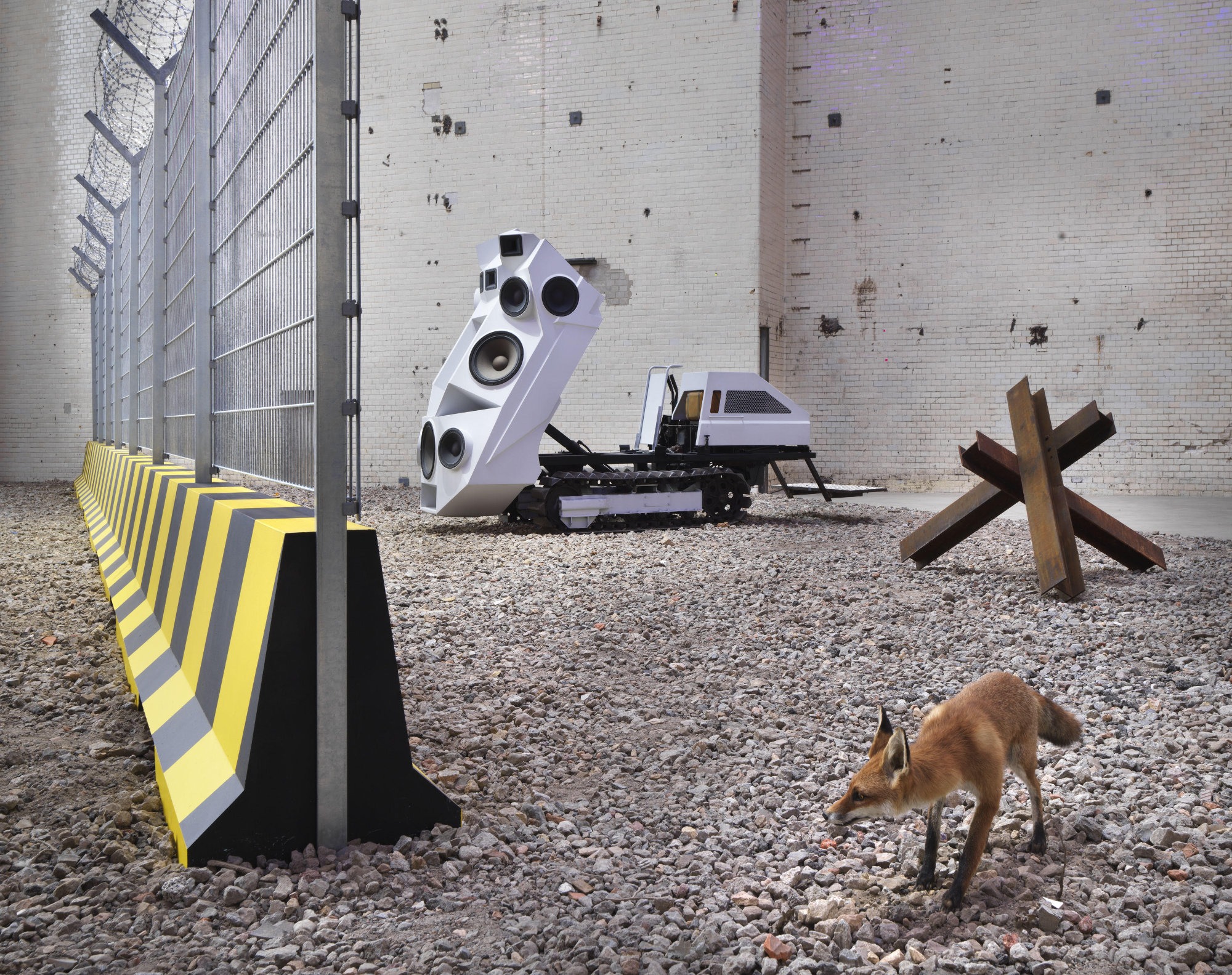 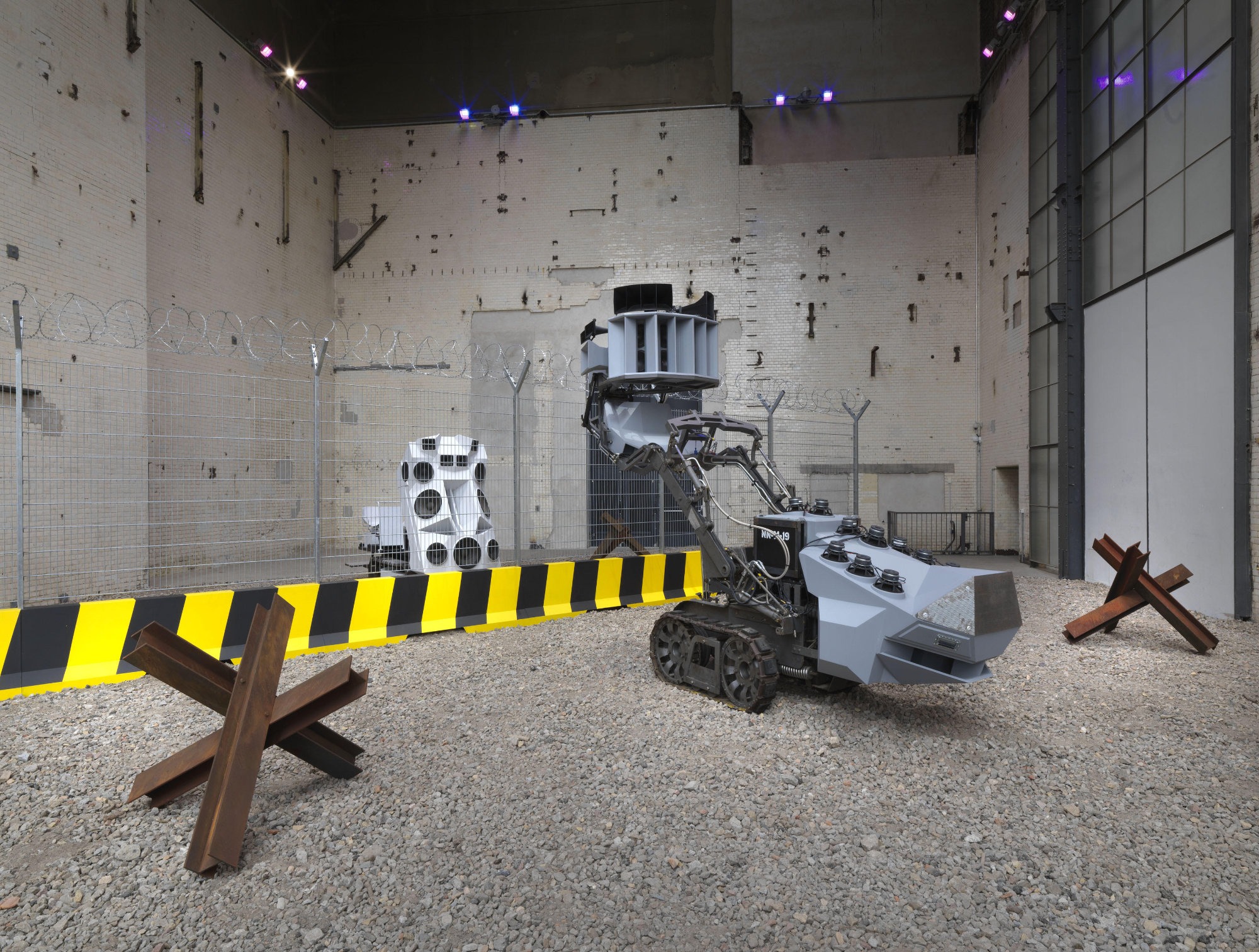 Nik Nowak, Schizo Sonics, 2020
Installation view, Kesselhaus, KINDL – Centre for Contemporary Art, Berlin
Photo: Jens Ziehe, 2020
With Schizo Sonics, Nik Nowak will realise a large-scale audio-visual installation comprising two monumental sound sculptures in the Kesselhaus at the KINDL, in which he engages with the phenomenon of sound as a weapon and medium of propaganda: Panzer and The Mantis confront each other in the 20-meter-high Kesselhaus and point to political proxy wars that have been—and continue to be—waged with sound in different contexts.

The insectoid sound sculpture The Mantis (2019) refers to the so-called war of loudspeakers that was waged acoustically on the border between East and West Germany from 1961 to 1965. After the East German government severely disrupted a speech by Konrad Adenauer at the Brandenburg Gate with loudspeaker announcements and music from the other side of the wall, the West Berlin Senate, in cooperation with the broadcaster RIAS and with the support of the United States, founded the Studio am Stacheldraht, a mobile unit of trucks and VW buses that broadcast news and moral appeals to the border guards in the East using state-of-the-art loudspeaker systems. On the 16th anniversary of the GDR, known as Republic Day, the war of loudspeakers ended on both sides. Mobile sound systems are still used for propaganda and psychological warfare—for example, on the border between North and South Korea.

In form and function, Panzer (2011) is based on Jamaican reggae sound systems—gigantic walls of loudspeakers with powerful subwoofers that make sound palpable not only acoustically but also physically. In “sound clashes” musicians compete against each other with their sound systems, making use of the bass-heavy genres of dub and dub reggae. In the 1970s the musical phenomenon of sound systems was increasingly instrumentalised by the rival political parties in Jamaica: on one side the Cuba-friendly, socialist PNP and on the other the conservative JLP, which is said to have had ties to the CIA. Due to the politicisation of sound systems and their context, these competitions developed into an ideological proxy war within the Cold War, which culminated in destabilising street battles.

In his installation in the Kesselhaus, Nik Nowak juxtaposes the two sound sculptures in a border-like situation in order to tie together the different historical, political, and cultural discourses. In the 40-minute audio work produced specifically for Schizo Sonics, four episodes combine narrative elements and historical original recordings, including some from the Studio am Stacheldraht, with sounds from nature and a physically palpable bassline to form a complex composition, the sound of an ideological split.

Nik Nowak (*1981 in Mainz, lives in Berlin) is an artist and musician and also deals with the phenomenon of mobile sound systems in his work as an academic and curator. His audio-visual performances have been featured at established festivals for art and electronic music around the world. His works have been presented at the Städtische Galerie Wolfsburg (2019), the Philharmonie de Paris (2017), the Berlinische Galerie (2016), as well as Hartware MedienKunstVerein Dortmund and Marta Herford (both 2015).