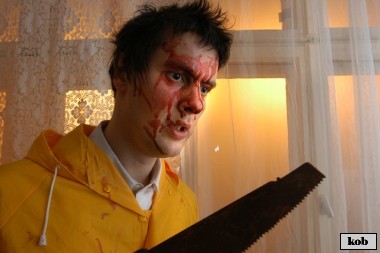 John Bock is being remote-controlled by the paranormal powers of the Lütte and driven towards heinous acts.
Thus the body of his victim is being deconstructed and diagrams installed on it, and he con-ducts various tests and analyses.
Decision-modules are being positioned on the body for determination of analytic truths.
Brutally, but endued with technical skill, body parts are being cut-off and placed into modules in order to determine the Optimal Formula...
The ultimate horror for a better world.
The film contains passages that are unsuitable for children.
John Bock is a multi-media artist known for his performances, which can last less than an hour to several days. In these, he tells stories about the world around us by utilizing a mix of pseudo-scientific, aesthetic, social, and political commentary to investigate the current state of western society. Through Bock's lens, our rational understanding of the world is reinterpreted.
Bock's work is unpredictable and in constant development and change. His work constantly transforms itself and crosses artistic borders – it is an avalanche of visual impressions ripe with references to blood, aggression, and apocalypse yet always maintaining a mood of innocent playfulness.
"John Bock is without a doubt among the most astonishing and inspiring to have emerged during the last decades. It is an unbroken and truly genuine force of artistic creativity with which Bock has set out on a quest of unbound imagination shaking and rattling the foundations of art with an unaffected intensity peerless in today's art world. Bock constructs a vast and utterly individual universe of Homeric proportions, comprising thousands and thousands of elements assembled from innumerable artistic sources and fragments of everyday life...When one views his work it becomes immediately clear that Bock does not fit into any of the categories commonly reserved for classifying art. His work simply cannot be described or characterized using typical contemporary art terminology, since it exists outside of traditional aesthetics and beyond concepts that are tied to a specific medium or artistic concern."
(Jens Hoffmann. "The World is a Stage". John Bock, published by ARKEN Museum for Moderne Kunst, Köln, 2004, p. 8)
Bock's work has been the subject of exhibitions throughout Europe and the U.S. Recent solo exhibitions include the Guggenheim Museum, New York; Museum of Modern Art, New York; FRAC, Marseille; ICA, London; Fondazione Nicola Trussardi, Milan; and Museum Boijmans Van Beuningen, Rotterdam.
this.is/klingogbang