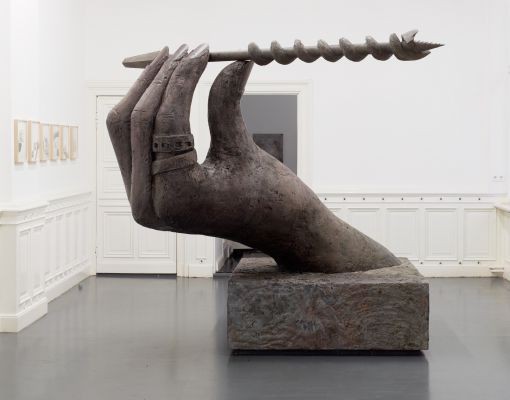 The video projection, photo series and large-scale sculpture by Christian Jankowski were created at the beginning of this year for the artist's solo exhibition at the SAPS, the Sala de Arte Público Siqueiros in Mexico City. This Museum is located in the former house and studio of the artist David Alfaro Siqueiros (1896–1974) who was an important political figure and an icon of Mexican Modernity. Together with Diego Rivera and José Clemente Orozco he forms part of the so-called “big three”, considered the country's most important muralists. Klosterfelde is happy to show Jankowski`s works from Mexico in a new context in the spaces of the Berlin gallery.

For the video Jankowski requested Televisa – one of the largest Latin American broadcasting companies – to reproduce an entire episode of La que no podía amar (The One Who Could Not Love), a Mexican telenovela. For this, the artist recurred to the same script, location and cast of the original episode of the series, maintaining its entire production and postproduction. His intervention merely consisted of convincing the actors not to speak the existing dialogues, but rather to remain mute and to freely communicate by means of dramatic emotional outbursts: The spoken word is replaced by running tears and sobbing. During filming, the actors were able to hear the original lines of the script through hidden earphones in order to synchronise the timing of their tears with the sequence of the dialogues in the original episode.

The title Crying for the March of Humanity refers to Siqueiros' monumental piece La marcha de la humanidad (1965-1971). By taking up the basic element of the telenovela – the action of crying as its high point and very essence – and having it performed as if it were a permanent condition, Jankowski creates an irritating new image of the “phantom pain” as celebrated in the mass media. The mass media as political instrument in order to distract the people, as was also impressively exercised in Berlusconi’s Italy, has its idealistic starting point in Siqueiros' murals with the aim to enlighten the people of Mexico.

The main piece of this show, the sculpture Monument to the Bourgeois Working Class , deals with the tensions which emerge not only between different social classes, but also within the life and worldview of an individual artist. During Jankowski’s visit to the SAPS archive he had found a photograph depicting a drill bit between the delicate fingers of a woman’s well-manicured hand. The photo had not been intended by Siqueiros to become an artwork but rather as a study of different perspectives of a drill bit that would later become an element in one of his murals. This pictorial encounter of oppositions, the working class symbolised by the drill bit and the hand of a woman wearing an elegant ring, manifests the discrepancy of Siqueiros' own bourgeois lifestyle and the political ambitions of his art. Impressed by such a concentration of contradictions in one single image, Jankowski had produced a sculpture based on the photograph, which in its formal language and materiality is located somewhere between Socialist Realism and theatre prop.

In the photo series Studies for a Monument to the Bourgeois Working Class , the artist uses the photograph from the archive and investigates various gestures of presentation. Jankowski asked the employees of the SAPS (from the director to the chauffeur) and those of his Mexican gallery, Proyectos Monclova, to hold the picture in front of the camera, each in her or his own way. The work consists of 28 b/w-portraits showing only the detail of the hands with accompanying labels revealing the professions of the participating "workers" who become presenters, being presented at the same time.

The works on view are the result of a number of artistic strategies that Jankowski frequently uses: The intervention into the productive processes of others and the involvement of various actors and institutions. Another significant aspect in Monument to the Bourgeois Working Class is the artist's attempt to question culturally enshrined myths and to destabilize fixed positions. Whereas, in one of his last works, Casting Jesus (2011), he had exposed the cult towards the iconography of the Jesus figure to employees of the Vatican, here, the artist reflects on a historical figure of political art as well as on media, politics and society of Mexico, universally applicable to other contexts.
www.klosterfelde.de