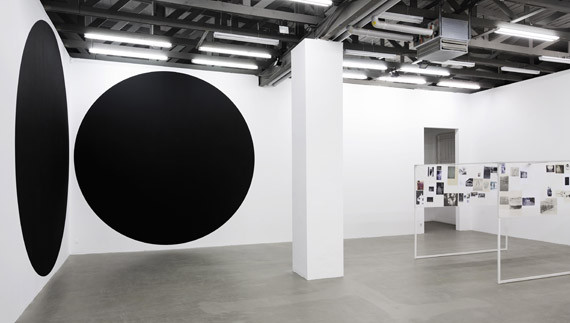 Neil Campbell’s (lives and works in Vancouver) work ranges from small- to large- scale paintings which often intend to connect with the dimensions of the given architectural space.
Here, he transforms one corner of the main exhibition space with two massive geometric shapes painted directly onto the wall. The flatness of these enormous black circles - the scale coupled with its impenetrable blackness - produces an overwhelming effect on the viewer’s senses. They oscillate between evoking a sensation of drawing energy away from the viewer and projecting a kinetic force outward.

Tobias Buche’s (b.1978 lives and works in Berlin) display wall take up the other half of the main space.
It functions as a sculptural intervention in space and simultaneously draws the viewer’s attention to an ever-expanding archive of images. These images - reproductions from newspapers, magazines, the internet, own photographs, drawings, flyers and personal notes - seem to have no direct reference to any source of time or origin and yet seductively influence the viewer’s perception. They constantly raise questions about their details, about what happened at the moment they were taken, what lies behind them and what can’t be seen in them.

In the front room, Dan Peterman (b.1960 lives and works in Chicago) has installed over one hundred stakes made out of recycled plastic stacked horizontally on top of each other. They add up to a massive sculptural tower, the present arrangement of which, the artist insists, is not a supposed representation of its final form or purpose, but rather a reference to continuing (possibilities of) transformation. Characteristically, this work moves along a very fine line between art, ecologically complicated material and functionality.

Ulrike Heise’s (b.1974 lives and works in Berlin) new work is consecutive to her filmic investigation of perishing insects, first shown at Linienstrasse 160 in 2006.
This new work quietly documents the drawn-out death of an earthworm, and although perfectly natural procedures like this happen millionfold on a daily basis, the viewer can’t deny a somewhat automatic association with a sense of cruelty while watching these scenes in their inherent intense focus of attention.

All works enter the space very physically, and it is the minimal and conceptual aesthetic which connects each individual work of this exhibition.