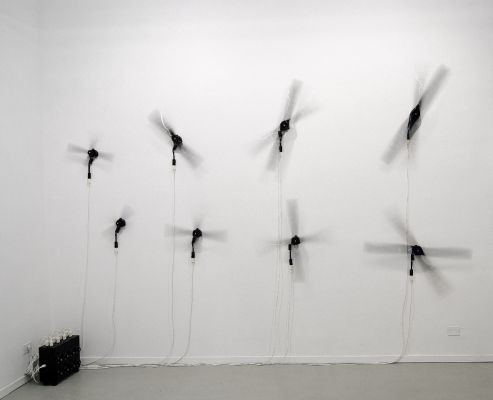 Klosterfelde is pleased to present Collective Time, Jorinde Voigt’s first solo-exhibition at the gallery, featuring a group of new drawings and two installations.

In her drawings, Jorinde Voigt develops her own visual language, a kind of abstract sign code that seems deeply subjective and individual at first but is abiding by strict rules and systems. Blurring the border between science and art, she analyzes the structures of diverse cultural patterns and natural phenomena. The resulting notations are the attempt at making the invisible visible, at unfolding the world into its basic parameters (such as distance, speed, orientation, frequency, pop charts, genre) through a philosophical drawing process in order to reveal the synchronicity of possibilities. In her new installations, Jorinde Voigt translates the methods of her drawing process into three-dimensional works.

Intercontinental I-IV (2010), a group of large-scale drawings and smaller preparatory studies, investigates positions of the observer of planes and their trajectories as well as the positions of the planes during the observation time. Suggesting the impression of complex imaginary world maps, the synchronicity of most diverse parameters is being visualized through uncountable notations with pencil and ink on paper: position, identical position, Boeing 747, Airbus A 319, Boeing 777 Dash 8, Fokker, speed in km/h (0 km/h - max. flight speed), 1- x sec. (duration of the event during perception), flight direction (direction), airport, territory, all other directions, 1-14 centers, continental border, north/south–axis and audio categories Continental Airlines. Here, the drawings don’t develop according to a linear axis, but come together from many different perspectives. They can be seen as the scores of an extremely dynamical process of perception.

Grammar (2010), a wall installation comprised of 64 plane propellers (here a group of 8) combines parameters of the rotating propellers with the 64 grammatical possibilities of the declination of possessive pronouns, in this case: I love you-I do not love you; you love yourself-you do not love yourself; he loves you-he does not love you etc. The element of declination is being repeated in the variation of the wing sizes, the rotation speed as well as the rotation direction.

The installation Collective Time (2010) investigates the collective consumption of narrative and closed time units – here the watching of a film. The top-10 of the most common movie genres such as comedy, thrillers or science fiction were selected. The black marks on the aluminium rods correspond in centimetres to the length of each film in minutes. Leaning closely next to each other at the wall, a black area is created representing the current time of the collective experience while watching the films.