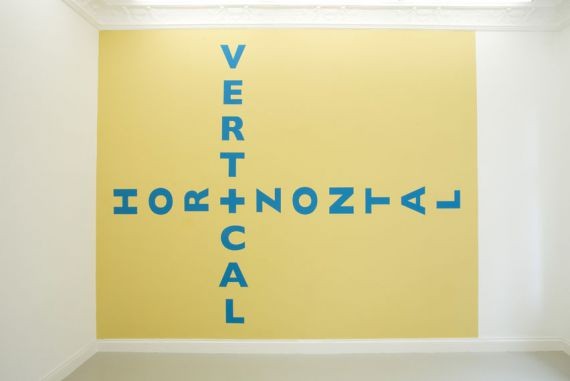 Gallery Klosterfelde is happy to announce an exhibition with American artist Kay Rosen, the first solo show in the new gallery space on Potsdamerstrasse. The exhibition features one large wall painting and several recent canvases and works on paper.

Text in its physical manifestations such as colour, size and typography, as well as in its structure and infinite semantic possibilities has been artistic source material for Kay Rosen since the 1970s. Examining it with word-play, humour and overstatements, displacement or inversion of meaning, the studied linguist always links the cultural and political potential of language with a formal scrutiny. While in her previous work the background of a painting or drawing mostly provided a neutral, often coloured space, like a blank page on which the text was symmetrically suspended, in much of the new work the background has become a mutual partner with the text. The rectangle of the canvas, paper, or wall, and its various aspects - length, width, depth, edges, corners - are activated and articulated by the language. Two smaller canvases, entitled "Gilt edged" and "Precipice" are two examples in case. In "Gilt edged", the golden letters ED are moved to the far left and right hand side of the picture, while the middle letter G is omitted, highlighting the golden edges of the canvas. Similarly, in "Precipice" the silver letters ECIPICE spread along the canvas, while the missing P and R have seemingly fallen off the left or right side of the picture frame, evoking the sheer cliff that the very word designates. In a beautiful small canvas titled "Y", the picture is divided into three triangle fields of primary colours blue, yellow, and red. Y, both a letter and a question, defines the pictorial space, conflating the formal terms of painting and the construction of meaning, of abstraction and legibility.

"Intersection" is a two-room wall painting in which in the first room the words HORIZONTAL and VERTICAL mark off the wall in two directions, longitude and latitude, like in a graph or a map. The letters I`s cross at the intersection point which is precisely fixed and determined by the order of the I`s in each word - 4th in HORIZONTAL and 5th in VERTICAL. In the next room, on the opposing wall, the I`s are in the exact same location, but isolated from the context and thus transformed from text into an abstract symbol and open to interpretation. What`s left is the intersection, a symbol on the wall like a mark of a buried treasure on a map, or like a positive sign (as opposed to a negative sign, a minus sign). The two words have been arranged so the I`s can cooperate and meet, and thus become a metaphor for a positive act of interdependency and agreement, linking Rosen`s interest in both the formal and social-relational aspects of language. The new involvement of the background and the spatial context also come into play with the two part drawing "Eclipse" where on two sheets the letters in pencil are superimposed on each other, one reading forward and one backwards, eclipsing their own meaning. Hung onto the two different sides of the same wall, the letters become physically manifested and appear to incorporate the wall into its body.

The title of the show "You and Your Landscapes!", is a line borrowed from Samuel Beckett`s Waiting for Godot. Kay Rosen`s new works are like conceptual landscapes that are marked off by the footsteps of the words, letter by letter, line by line, defining the space and revealing something inherently poetical and post-linguistic about language.

For images or further information, please contact the gallery.