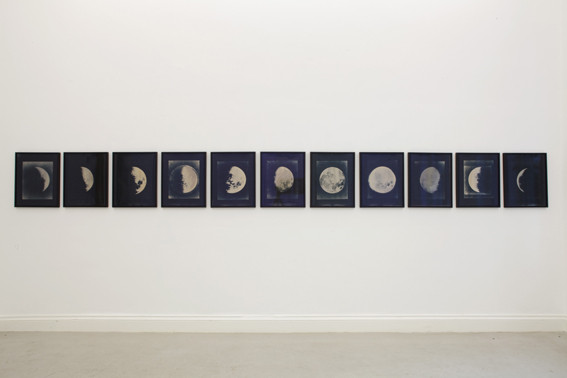 Klosterfelde is pleased to present Blood to Ghosts, Lisa Oppenheim’s first solo-exhibition at the gallery, featuring Lunagrams , a series of new photograms, and Cathay , a double 16mm film projection.

Lisa Oppenheim explores the underappreciated aspects of visual culture: the tell tale expressions of contemporary life which are often overlooked, exposing the erosion of information through the passage of time. Much of Oppenheim’s work is research, looking for images and objects that point to something larger and then developing strategies and techniques to make these relationships visible. As a result the final form depends on the original material and ranges from 16mm film installations to slide shows, photographs and photograms, as well as prints and drawings.

In Lunagrams (1851/2010), a series of photograms, negatives depicting a lunar phase from 1851 are illuminated by moonlight of the same lunar phase in 2010, providing a translation of images of the past into the present. The source images are glass negatives taken by John William Draper, who was the first to photograph the moon. Photography as well as celestial bodies, such as the moon, can be seen as generic markers of the passing of time. The process of making these images is bringing to life which would otherwise be hidden away under a layer of dust in a library or archive - illuminating the past through the light of the present.

Both the notion of translation and the idea of reviving something from the past act as a link between the two bodies of work in the exhibition and inspired the title Blood to Ghosts . „Bringing blood to ghosts“ (Hugh Kenner in The Pound Era) is how Ezra Pound, the American poet, thought about translation. His theories of translation were based on Orientalist and mostly imaginary assumptions that Chinese is a pictographic language. That its characters are transparent signs of things, uncomplicated by the sound or meaning of words. Thus, according to this logic, Pound’s task as a translator is primarily to translate the visual image into the written word.

It is within this context that Oppenheim set off to make the film Cathay (2010). She found a fragment of a poem that Pound constructed from the notes of Ernest Fenollosa, an American scholar living in Japan, presumably from his translations of the 8th century Chinese poet Li Bai. Neither Pound nor Fenollosa had any real knowledge of Chinese. Fenollosa produced this and other fragmentary translations that Pound would later turn into the extremely influential collection of poems entitled Cathay , an antiquated name for China.

Oppenheim then sent the original untranslated version of the poem to an East Asian Languages and Literature professor and received what is, unsurprisingly, a very different version. This film slowly shifts from Pound’s translation to a more ‘correct’ or perhaps literal translation. The movement takes place through the substitution of words with corresponding scenes or objects found and filmed within the visual space of New York City’s Chinatown.

In turning words back into images the artist is reversing Pound’s strategy of translation. The left side of the double projection begins with the entirety of Pound’s poem while the right projection shows a succession of pictures. The images on the right are the visual equivalents of phrases from the new translation and only have a correlation to the text on the left when both translations are similar. Images slowly substitute the text on the left and vice versa until the end of the film, when the left is entirely images and the right is entirely text. The poem is recombined, remade, throughout its seven iterations.