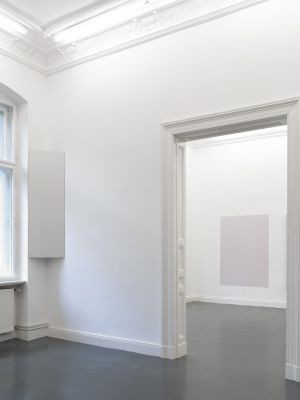 Sutton Lane is pleased to present a two person exhibition by Liz Deschenes and Scott Lyall as part of a gallery exchange with Klosterfelde.
On view are three photograms by Liz Deschenes and four paintings by Scott Lyall from the nude series along with an adhesive vinyl.
Deschenes uses the exploration of photographic processes as a tool to investigate photography itself, the way the medium has been positioned and historicized as well as its relationship to other practices. The language and mechanisms of photography are self-consciously referenced and activate questions of representation and modes of seeing. The black photograms are camera less, reflective photographs which are the result of exposing photosensitive paper to light. Conceived as corner pieces they activate the surrounding architecture, functioning as a brace for the space and the other works in the exhibition.
The works by Scott Lyall are unique printouts in which pale colours derive from mathematical interpolations. The image which is composited to run continuously across the support is made up of digital files containing thousands of different colours. These works suggest a penumbral, shimmering light, and appear to be -indeed- nude, but they are actually the result of successive layers of colour applied to canvas or vinyl. In the case of the vinyl adhesives, only a sale or a curatorial request calls a new work into being. In this sense, this series of works highlights the contemporary economy of speculative value.

Liz Deschenes lives and works in New York. Her work is part of the permanent collections of The Walker Art Center; The Art Institute of Chicago; the Metropolitan Museum, New York; the Corcoran Museum of Art, Washington D.C.; the Whitney Museum of American Art, New York; the Hirshhorn Museum and Sculpture Garden, Washington D.C and CCS Bard Hessel Museum, Annandale-on-Hudson.
Scott Lyall works in both New York and Toronto. He recently had a solo exhibition at the Power Plant Contemporary Art Gallery in Toronto. Past group exhibitions include PS122 (New York), The SculptureCenter (New York), and the Contemporary Art Gallery (Vancouver).
Sutton Lane will present new works by both artists at abc - art berlin contemporary this September.
www.klosterfelde.de