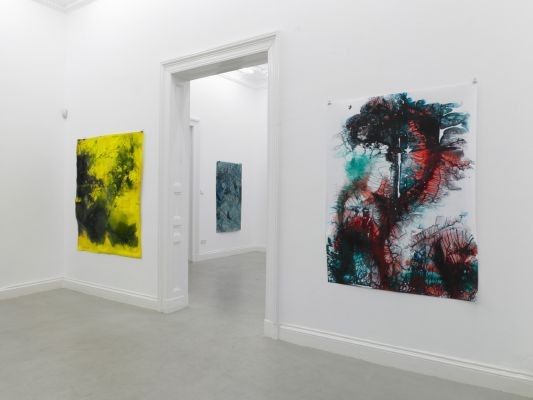 ‘The similarity of the pictorial structures to veils, plants or starry heavens, prompts the imagination like in science fiction – to a greater extent than a real veil or leaf would do. These are random resemblances. Yet, the basic impression of nature’s complexity is here equally in consequence of the molecular self-organization of matter. The basis for self-organizing processes in the natural world are physical and chemical laws, like the relatively weak intermolecular forces. Van der Waals forces, for instance, provide the right polarity of the electrically charged atoms and molecules. Cohesive and adhesive power of the liquids make the pathways, and pigment particles deposit or get dragged along like pebbles and sand in a riverbed.’ (Ulrike Heise)

Tobias Buche’s exhibition entitled "Drachenpost" comprises large-format works on paper loosely arranged across the walls of the first two rooms of the gallery. While the earlier works on movable walls and other displays marked a highly subjective compilation of personal archive material – snapshots of friends, computer-printouts, Xerox-copies and found photographs as well as drawings and texts - and thus served as a ‘portrait’ in terms of representing the artist’s perceptions and his interests, the new works’ level of abstraction is surprising. Any familiar sense of human scale in this "world in the world" is absent.

In terms of medium specificity the exhibited work denies any strict classification no less than the earlier pieces, which dealt with the legacy of photography and collage. The new works are situated somewhere between printmaking, drawing and painting. They resemble drawings with their fine, nervously jagged mark-making, or develop a painterly quality with their smeared, at times plain large-scale colour fields. Serving simultaneously as gesture and index, colour is the kingpin in this process which is somewhat akin to printmaking, where colour pigments dissolved in water leave their traces on the paper. A tension evolves between the erratic, uncontrolled handling of the sheets and the spectacle of the glossy papers seemingly dripping of lurid, aggressive paint. However, it is always merely a quotation of the monumentally aggressive – the loud gestures finding their ephemeral, ingenuous and timid counterparts.

Thus, the moment of the actual making comes to the fore. In the third exhibition room it becomes clear that Buche is always also concerned with the conditions of artistic production. The objects displayed here are found objects, leftovers from flea markets. They are the very last remnants in the economical food-chain, ready-mades with an inherent poetry of the gesture, of resistance but also of loneliness.
www.klosterfelde.de