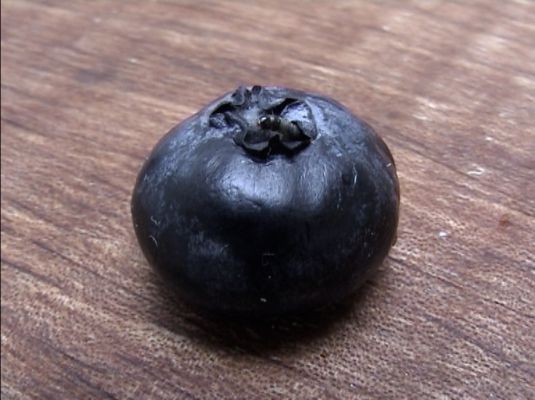 In her second solo exhibit at Klosterfelde, titled Reizarmen Umgebung (Low-Stimulus Environment), Ulrike Heise shows new works on video and installations. In these pieces, the artist examines natural phenomena—for example, in the lives of insects and microorganisms—that resemble aspects of our human world.

Heise’s video “Frucht” (Fruit) focuses reverently and in minute detail on a scene that we would normally never notice. A caterpillar sits atop a blueberry, spinning white thread to build a cocoon. With the camera’s intense proximity, one can even recognize light reflexes and mirrored images reflected on the creature’s head. The scene triggers associations with “nesting” or “homemaking.” A tension emerges between the foreign and the intimate. In Heise’s work, the insect serves as a metaphor for our own human behavior and becomes the focal point of her artistic, investigatory observations.

In “Nah und fern” (Near and far), the artist uses a microscopic camera to probe the inner organs of a preserved dead beetle. The insect itself is displayed on a pedestal in the exhibit. Intricate surface structures become visible on film, and the beetle’s interior seems extraordinarily complex compared to the rough mass before the naked eye. This contrast demonstrates that living structures are infinitely multifaceted: The further the camera might venture into the organism of the insect, the more universes—or landscapes—would open themselves to the viewer. Inside the beetle’s body are parasites with their own digestive systems, which are then home to other microorganisms.

In a juxtaposition of two videos in “Ohne Titel” (Untitled), Heise begins with the microscopic documentation of a living water flea. Its body is transparent, and the workings of its organs are always visible. Adjacent is a video of a man masturbating, remote control in hand. He lies naked on the floor of his apartment, his head hidden behind the crossbar of a window frame. The one-hour scene repeats itself in a loop. “Ohne Titel” centers on regular, rhythmic pulsation as an elementary characteristic of vital processes and material transport within the organism. Heise examines the ‘living objects’ that she finds in her immediate environment. Neither sexually charged nor voyeuristic but rather a scientific observer, she zooms into the scenes with the help of her camera.

Following a classic principle of soil science to sift material by particle size, the artist categorizes soil samples in “Ohne Titel” (Untitled) according to various parameters, much like a natural scientist. Heise piles six homogenous types of sand and gravel next to each other on a shelf. The variation in the materials’ constitution produces specific angles of repose, which the viewer can read on corresponding cards. Meanwhile, the six formations on the shelf below are all derived from a single shovel of forest soil. Heise has used a sieve to separate out the various components, from fine dust to coarse gravel.

The sculptural installation “Umfüllung” (Transfusion) examines metamorphosis in the insect world. Heise fills a cylindrical funnel with liquid and places it near the wick of a flame. Over the course of fifteen days, the liquid flows drop by drop into a second vessel below until the container above is empty and the flame extinguished. Heise’s experimental setup visualizes the phenomenon of “the transfusion of one animal into another, the change of Chalicodoma substance into Anthrax substance; and, as long as the transfusion is not complete, as long as the eaten [Chalicodoma] has not disappeared altogether and become the eater [Anthrax], the ruined organism fights against destruction.” (From Jean-Henri Fabre’s observations in „Souvenirs Entomologiques“, 1879-1907)

Heise’s work poses questions of life and death, of our transience and purpose. It reflects a fascination with the phenomenon that we often try to recognize our human physiognomy and behavioral patters in other entities, such as animals and objects. Her pieces reference attitudes that fluctuate between sober objectivity and empathy. Heise employs methods from the natural sciences, though lacking the logicalconclusion. The artist presents us with poetic and fictive documentation of processes, we search in vain for explanations of her experimental setups. This dearth of function peaks in utter absurdity with the installation “Box.” Here, Heise invites visitors to enter a cabin built out of wood and foam, an unobserved and unanalyzed space within the exhibition space.

Born in Lübeck in 1974, Ulrike Heise studied visual communication at Berlin University of the Arts and landscape ecology at the University of Greifswald. She lives and works in Berlin, where her work has been exhibited at Helga Maria Klosterfelde Edition in 2012, the Schinkel Pavillion in 2011, and Klosterfelde in 2006 and 2009, to list a few.
www.klosterfelde.de