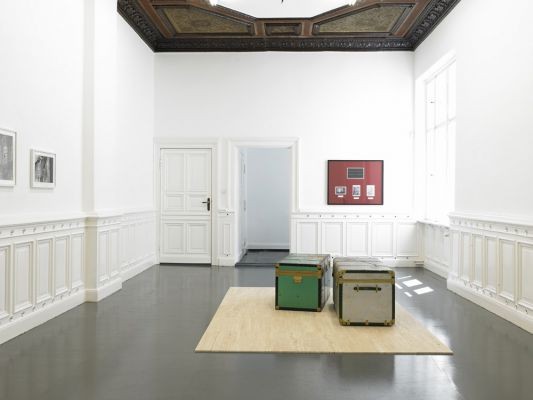 Klosterfelde Gallery is delighted to present Viaggio in Italia , an exhibition by Ulrike Kuschel. It features new works created during or immediately after the artist’s stay in Rome as the 2010 scholarship holder at the Villa Massimo. Very personal, yet explicitly documentary in approach, Kuschel examines this location, focusing on historically and politically complex facts and circumstances. Viaggio in Italia showcases individual works in various media, however, engaged in a conceptual dialogue with one another on a plurality of levels.

At the Bibliotheca Hertziana, Kuschel studied the catalogues from the annual exhibitions that were held at the Villa Massimo in the 1930s and 1940s, surprisingly finding that sculptors like Hermann Blumenthal and Fritz Cremer, the later GDR “state artist,” once had their ateliers in the Villa Massimo, also called the Accademia Tedesca. Stylistically, their sculptures share a certain proximity with the works of the “degenerate” and persecuted artists Käthe Kollwitz and Ernst Barlach, but, they were nevertheless able to work in Rome during the Nazi regime as scholarship holders specially selected by the German Reich. After the end of the war, the focus in the West was on abstraction, but in the GDR, many artists continued to work in the figural tradition, thus being among the first artistic impressions on Kuschel.

The work Accademia Tedesca (2011) is the product of this research and simultaneously the artist’s way of examining her own role as a scholarship holder at the Villa Massimo. By copying the works of select sculptors from the exhibition catalogues, Kuschel also “processed” these works that had once been made in Rome, exploring the point in time when they were made and the image of humanity they convey. The 30 pencil drawings, which were made in a classical sense for the purpose of “study,” were mounted in a series of strict rows. In terms of content, they ambiguously shift between Kuschel’s personal touch as an artist and the act of rationally questioning the way an artwork may reinforce particular ideologies.

This sober arrangement is contradicted by the piece exhibited in the opposite room: a rather dark and uncanny image of Fritz Cremer’s atelier at the Villa Massimo is pasted on the wall. It bridges the way to other works dealing with Fascist Rome. Viaggio in Italia (2011) comprises two old found suitcases on a travertine-tile floor evoking a plurality of associations: travertine as a popular building material used in ancient Rome as well as for Fascist architecture, Rossellini’s movie of the same title and Goethe’s Italian Journey. Additionally, these suitcases recall deportation, escape and persecution, that were, also in Rome, part of everyday life during the German occupation.

Hitler’s own trip to Rome is idiosyncratically documented in the assemblage Amicizia (2011). Framed by a vitrine-like case, Kuschel presents “historic proof” for the absurd display of friendship between Hitler and Mussolini, which culminates in friendship ribbons especially made for the piece – one for the “Führer” and one for the “Duce.” Like a prophet and from behind the Pantheon, the speaker in L’oratore (2011) reminds viewers of the existence of seductive ideologies, of dangerous intersections between religion, art and politics.
www.klosterfelde.de