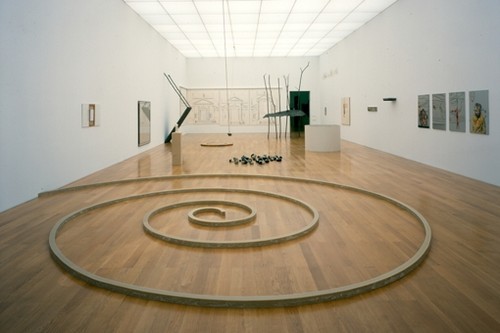 The Kunstmuseum Liechtenstein presents for its 10 year anniversary a large Arte Povera exhibition which includes works by the foremost artists of the Arte Povera movement.

Italy, in the late 1960s, was in the throes of turbulent social upheaval. The sense of a new departure, and a new outlook, was clearly echoed in the world of art. The stir caused by American Pop Art’s exploration of consumerism and trivia had barely even begun to settle when the young art critic Germano Celant mounted a group exhibition in Genoa in 1967 – Arte Povera e IM Spazio – with an accompanying text that was published in extended form in Flash Art magazine under the title “Arte Povera: Notes For a Guerilla War”. These are the events that mark the birth of Arte Povera. Centred mainly in Turin and Rome, Arte Povera was not so much a manifesto-led coalition of artists as a loosely based movement whose shared interests were recognised and supported, not only by Germano Celant, but by other art critics as well.

The artists of the Arte Povera movement sought to bridge the gap between art and life, expanding consciousness by reducing the distance between the artwork and the spectator. The familiar, ordinary things that we tend to regard as worthless were to be rediscovered as new, art-worthy materials; previously neglected everyday items were to be transformed into meaningful works of art. The new art was to be more simple and more modest in its means, and more authentic in its materials.

In this way, Arte Povera was to open up a poetic and sensual window on the world and the energies behind all that exists, creating metaphors of the life-force that flows from primordial sources – metaphors, above all, of the spiritual energies that seek to change rigid structures.

The exhibition at the Kunstmuseum Liechtenstein will include works by artists such as Giovanni Anselmo, Alighiero Boëtti, Pier Paolo Calzolari, Luciano Fabro, Jannis Kounellis, Marisa Merz, Mario Merz, Giulio Paolini, Giuseppe Penone, Michelangelo Pistoletto and Gilberto Zorio. It will be complemented by a number of works by artists closely related to the movement, some of whom were also involved in major exhibitions from 1966 onwards. These include, among others, Gino de Dominicis, Piero Gilardi and Salvo. The focus of the exhibition is on early works by Arte Povera artists.

The focus is on early works by Arte Povera artists. Many of the works shown will be from the collection of the museum. The Arte Povera has been a mainstay of the collection ever since the founding of Kunstmuseum Liechtenstein. These works, more than fifty in all, will be shown alongside works from public and private European collections, including some little-known works from the early years.

The exhibition is accompanied by a catalogue in German and English documenting the exhibition and the works presented. New essays and interviews with artists aim to further examine the Arte Povera movement.
www.kunstmuseum.li