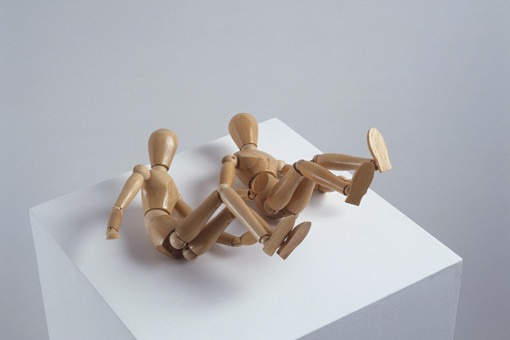 "Comedy is simply a funny way of being serious."
Sir Peter Ustinov

The exhibition Don’t Smile, sets out to track humour, the trippingly light kind, the roguish, the dry, as well as the self-reflexive. Humour that examines language, logic, society, the day-to-day and the art system both gravely and with tongue in cheek.

What is it that distinguishes humour? How is it expressed? In the artworks on show, it is sometimes the encounter between different worlds and value systems – such as everyday reality and intellectual imagination – that initiates comedy. Or it is a shift that transfers things from their frame of reference into a new meaning, thus triggering smiles. It is especially the overlapping of verbal and visual levels that conjures an open and humorous way of seeing things. And despite the comic level, great seriousness underlies the works
on exhibit.

The exhibition has been organized in close collaboration with the artists Josef Dabernig, Rainer Ganahl, Bethan Huws, Anna Kolodziejska, Vaclav Pozarek, Kay Rosen and Eran Schaerf. Each artist has created an atmospheric and compact narrative specifically for Don’t Smile. The overall effect is of an edginess spanned between multifaceted and challenging commentaries that incite ulterior and subtle, indeed enigmatic, humour.

Interwoven into the exhibition are a selection of historical artworks that set the tone and the frame of reference. Of note are especially Marcel Duchamp, René Magritte and Kurt Schwitters. As significant forefathers from the beginning of the 20th century, they still today pose valid questions on contextualization, on compositional elements, on language as a medium of the visual arts, on wordplay, on the mutating image, as well as on the art of thinking. In addition, with John Baldessari, Joseph Beuys, Marcel Broodthaers, Robert Filliou and Anne Marie Jehle, we find exemplary positions of the “see” change in 1960s art. “All artists make artworks” as Bethan Huws puts it in one of her word vitrines. But is that really so?

The exhibition is a production of Kunstmuseum Liechtenstein, curated by Christiane Meyer-Stoll.
www.kunstmuseum.li