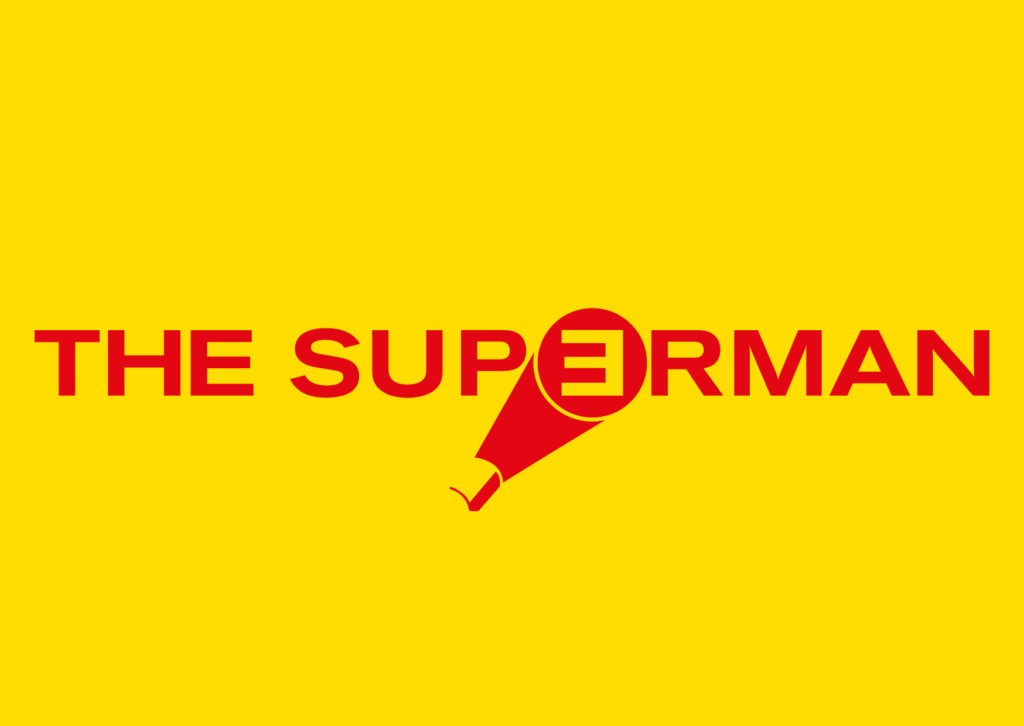 Alex Da Corte, announcement for the exhibition The Superman at the Kölnischer Kunstverein 2018
Alex Da Corte (*1980 Camden, New Jersey, USA) uses painting, sculpture, installation, and film to explore the conditions and intricacies of human perception and the reactions associated with it. Special attention is paid to the complexity of today’s consumer world and how it intertwines with social, cultural, and political spheres. And thus, concepts like desire, hope, and longing account for just as much of his work as the examination of terms like dependence, alienation, and a sense of being lost. The starting point for his artistic works is mostly found in objects and scenarios from his personal and more general social environment which he then transforms into works of art through modifications, changes of perspective, or contrasting juxtapositions that appeal powerfully to all the senses.

Four cinematic works come together at the center of Alex Da Corte’s presentation to form a haunting installation in the large hall of the Kölnischer Kunstverein. These works include TRUƎ LIFƎ, which was made in 2013, as well as the three-part work BAD LAND, which was created in 2017. Despite being created at different times, both pieces share a point of origin that is closely connected to a personal experience of the artist. A friend sent him a photograph a few years ago that seemed to show him in front of Leonardo da Vinci’s Mona Lisa in the Musee du Louvre in Paris, although the photograph was actually of the American rapper Eminem. This confusion was based on a certain similarity between the two and prompted Alex Da Corte to begin working with the idea of the world-famous musician, who had been repeatedly criticized in the past for glorifying violence and being hostile towards homosexuals and women, and his Slim Shady alter ego. He was interested in the question of what makes up Eminem as a person, what psychology is involved, and how he would behave in a private environment. His interest finally culminated in the work TRUƎ LIFƎ, for which he took on the role of the rapper by dyeing his hair blond, putting on the appropriate clothing, and adopting his persona. In reference to the documentary 66 Scenes from America by Danish filmmaker Jørgen Leth in which Pop Art artist Andy Warhol eats a hamburger, TRUƎ LIFƎ depicts Eminem as played by Alex Da Corte eating a North American breakfast cereal called Life. Despite a compositional sophistication that recalls the simple actions of artists like Bas Jan Ader, Gilbert & George, and Bruce Nauman, the plainness of the scene forms a contrast to the glamor and fame – not to mention the drive and drastic behavior – that the rapper embodies. Eminem is portrayed by Alex Da Corte more as a human being than as an inaccessible and invincible celebrity, whereby the casual but nevertheless noticeable placement of a package of Cinnamon Life with the image of an African American boy on it also expands on socio-political aspects.
The three Bad Land films, the title of which refers to an underprivileged district of Philadelphia where the artist’s studio is located known as the Badlands, were conceived by Alex Da Corte as a cohesive work and are a continuation of the ideas addressed in TRUƎ LIFƎ. The first film shows the musician in a setting divided into two areas: Its clear-cut, uniformly red and yellow tones is reminiscent of a pop version of Ellsworth Kelly or Blinky Palermo. In the almost eleven-minute sequence, the protagonist is busy untangling a chaotic bunch of old Playstation controllers and then arranging them neatly on a table-like base. For Alex Da Corte, the action functions as an allegory of fear, power, and control, whereby the banality of the scene once again breaks away from the general image of Eminem.
In contrast, the second film in the BAD LAND series makes significantly clearer reference to the practices of a rapper. Accompanied by atmospheric sounds, the film shows how the musician smokes cannabis with homemade pipes and bongs. It is surprising how perfectly, artistically, and humorously the smoking devices are made from various everyday objects, and without losing their functionality. In the course of the consumption, the smoker appears to fall into a trance-like state that is accompanied by a deep laugh and intense cough that seems to trace back to a lack of routine.
Finally, the third and last film in the BAD LAND series shows the rapper performing probably the most unusual action. Eminem, as depicted by Da Corte, stands in front of a grey background and is busy coloring his hair by rubbing yellow mustard into it while accompanied by ambiguous sounds and tones. As the film progresses, he puts on a paper crown from a fast-food restaurant, which is then repeatedly rubbed with the condiment although it already shows clear traces of the treatment. This symbol of power, which is particularly popular in hip hop culture, is thus not only associated with the excesses of consumer society, but is also questioned with palpable humor. It can hardly come as a surprise in this context that the rapper seems to increasingly lose his mind towards the end of the sequence. After all, a symbol of power like a crown is always associated with the fear of losing power, while fast-food chains often stand for seductive illusions.

The examination of psychological parameters as they are revealed both in the BAD LAND films as well as in TRUƎ LIFƎ represents a significant driving force for Alex Da Corte’s work in which the traditional boundaries between the different genres seem to dissolve. It can also be seen in the exhibition THE SUPƎRMAN, in which the films are embedded in a complex architecture that plays with the viewer’s perception and emotions with remarkable intensity. It is not just the sculptural presence of the films that becomes overwhelming, but also the picturesque installation that melts somewhere between Pop Art and Surrealism into an intoxicating gesamtkunstwerk that evokes memories of nightmares just as much as those of Disneyland.