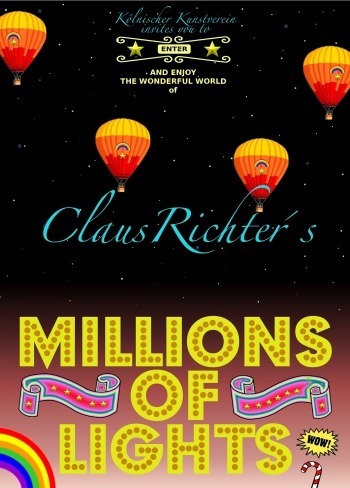 Miniature pink Walt Disney Cinderella castles, whole villages of tiny Polly Pocket houses, layered cream cakes made of plastic, masks and laser swords, photographs of adventure and fantasy worlds in theme parks – for this year’s archive project Millions of Lights, Claus Richter will trawl through his own archives of toys, novelty items and photographs to build a small theme park revealing his own, very personal take on the seductive dream worlds of Disneyland, Phantasialand and Hollywood studios.

Millions of Lights explores the theme of escapism, and the materials it presents point out the historical parallels between the worlds of art and entertainment – and if you look closely, they paint a very revealing picture of how we construct our world.

The work of Claus Richter (*1971) was recently shown in a major solo exhibition at the LeopoldHoeschMuseum in Düren. He has also had solo shows at Kunstverein Braunschweig (2008), the Ursula Blickle Stiftung in Kraichtal, the Museum für Gegenwartskunst in Siegen (2005) and at the Clages and Eva Winkeler galleries in Cologne. He presented his exhibition Après Crépuscule at the Kölnischer Kunstverein in 2009 and has since held a studio grant of Kölnischer Kunstverein at the ChocolateMuseum in Cologne. Millions of Lights is part of the Antenne Köln series.

In the project Der springende Punkt, artists and curators work with archives of individuals and institutions pertaining to contemporary artistic and curatorial positions. In each instalment of the series, a single artist or curator chooses aspects of the archive they are working with to focus on and emphasize. In 2007 Marcel Odenbach presented an archive project on Happening und Fluxus, a Kunstverein exhibition in 1970. The exhibition The Soliloquy of the Broom by Olivier Foulon, a project inspired by the Proust archive of Prof. Reiner Speck, followed in 2008. In 2009 Oliver Tepel presented the group exhibition Après Crépuscule. In his project in 2010, which was shown alongside the exhibition Forbidden Love: Art in the Wake of Television,Simon Denny presented material on Judith Barry and Ken Saylor’s design for the exhibition From Receiver to Remote Control, which was shown at the New Museum in New York in 1990.
www.koelnischerkunstverein.de