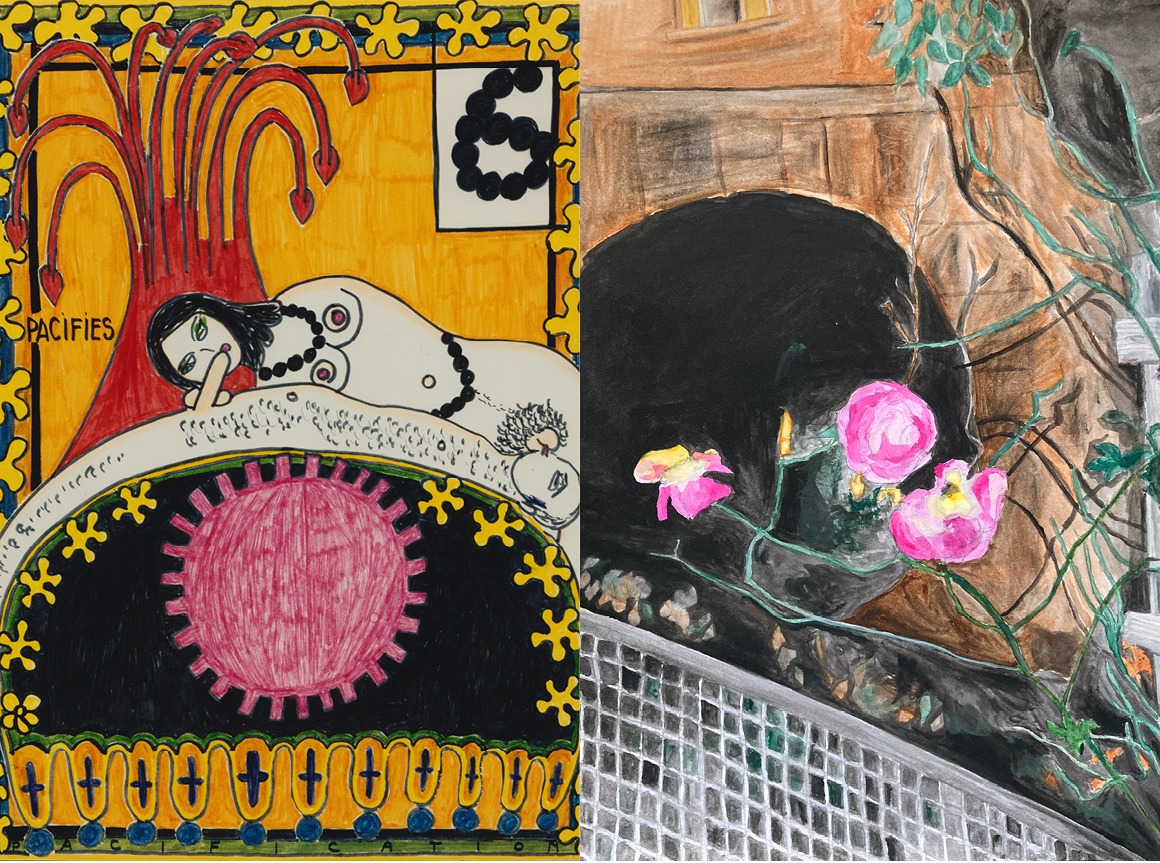 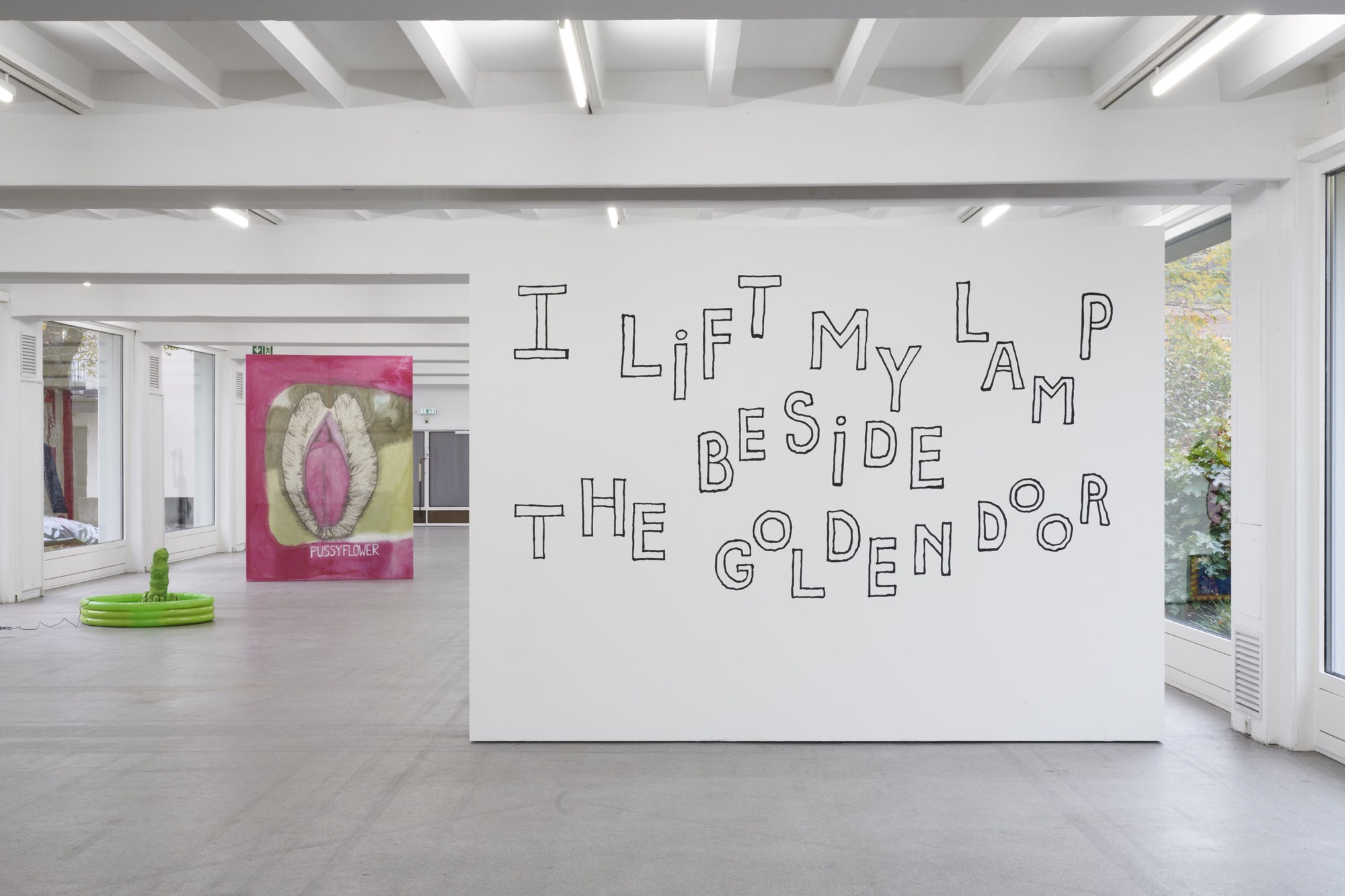 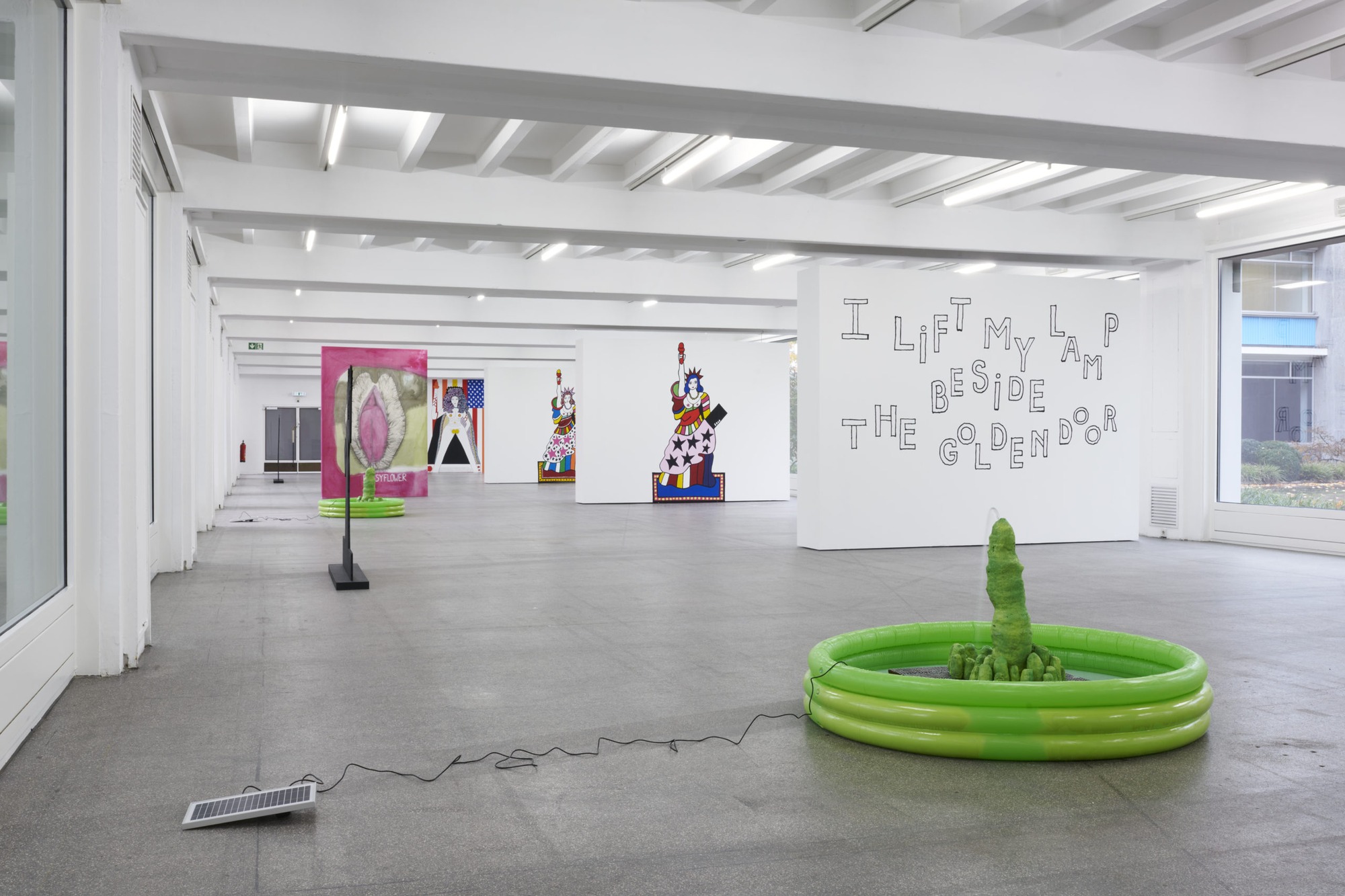 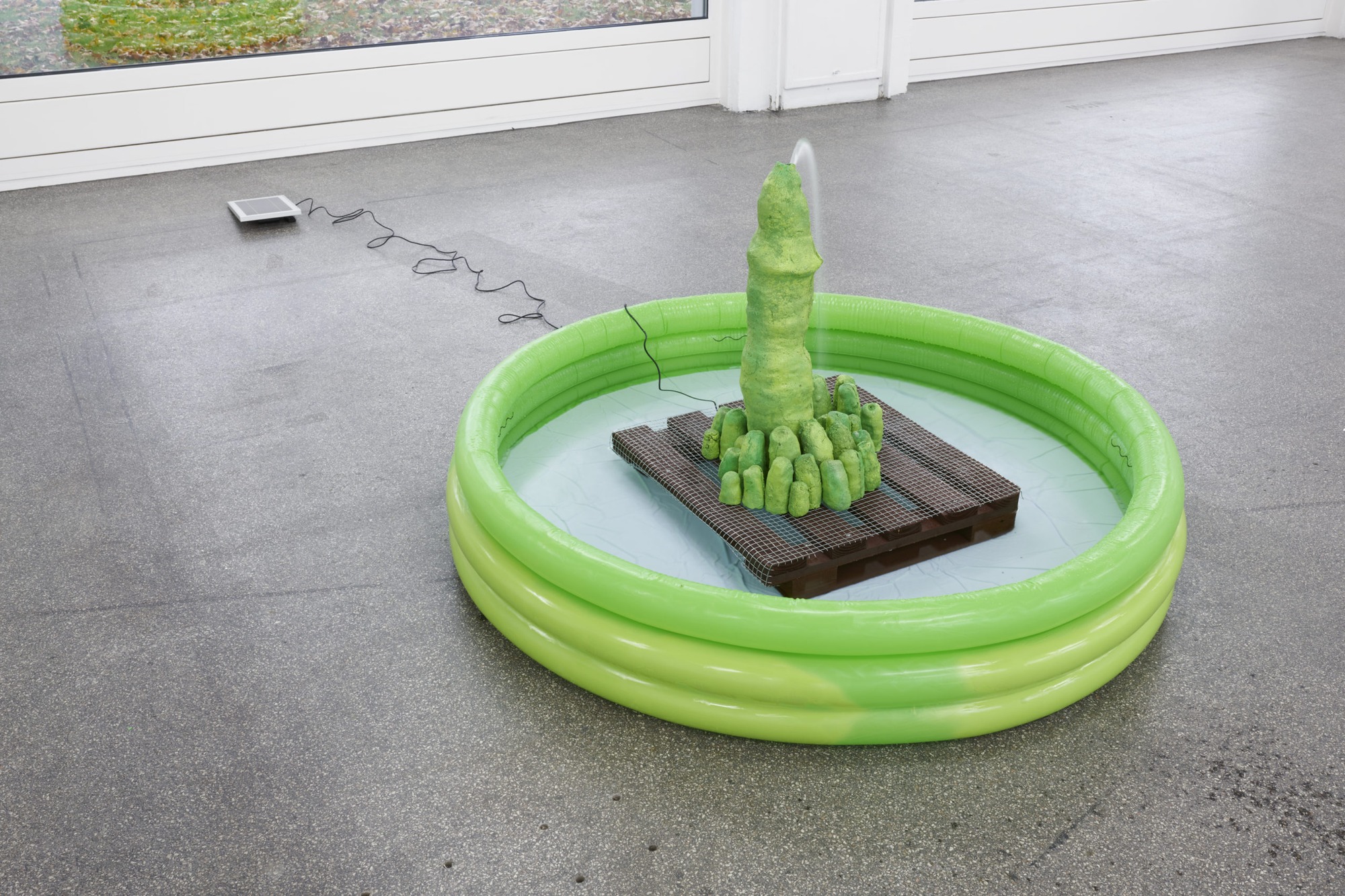 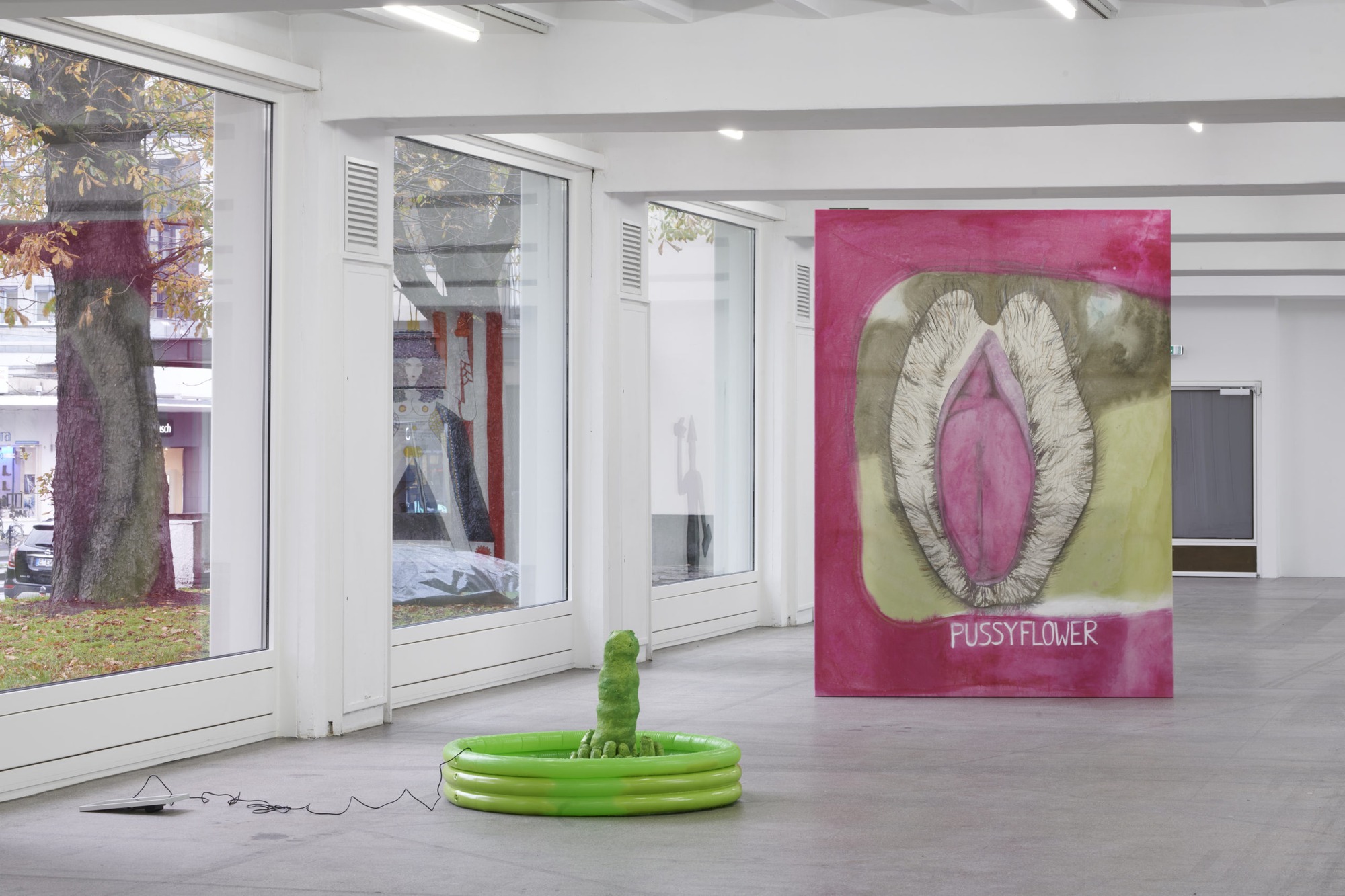 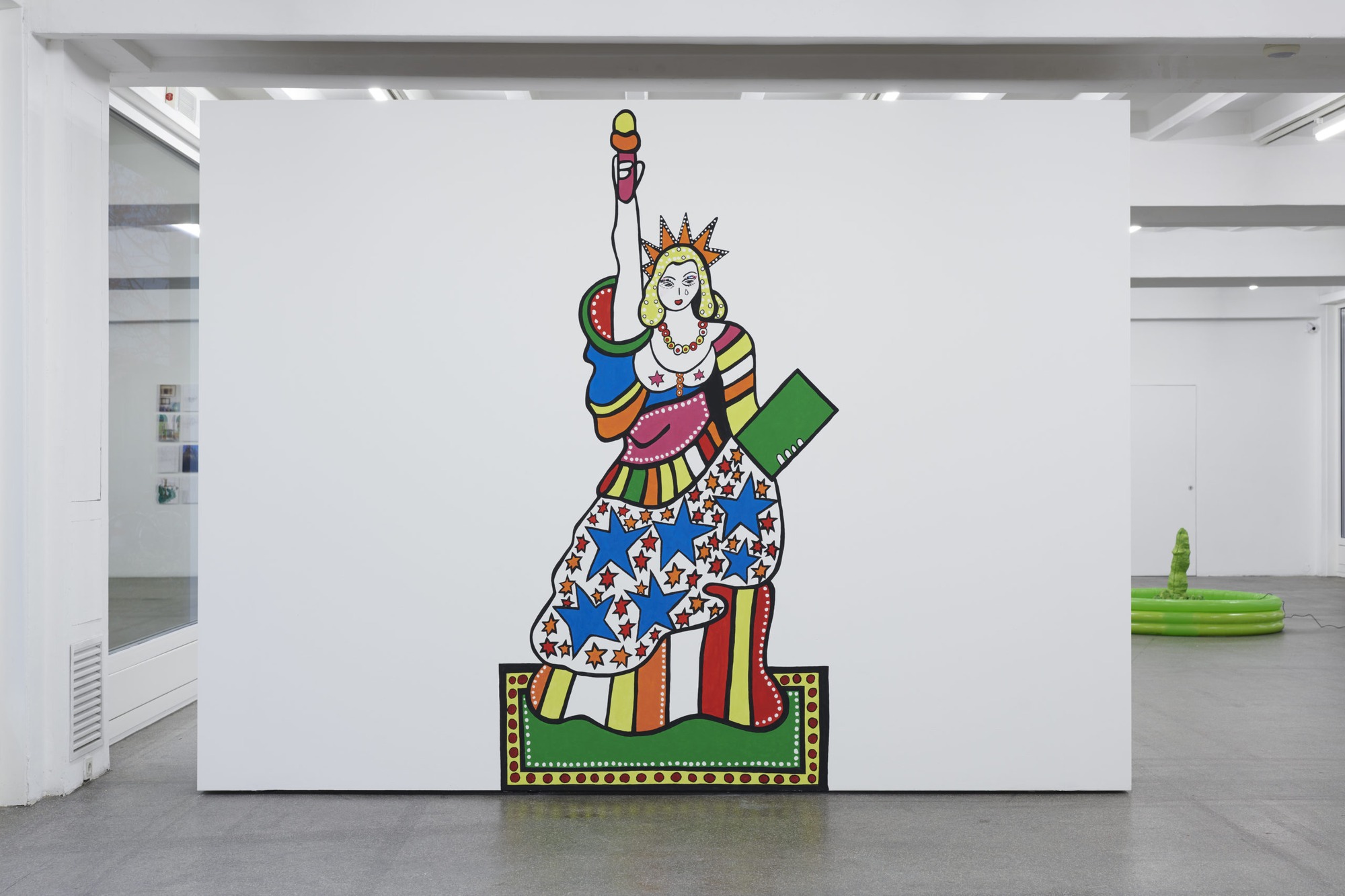 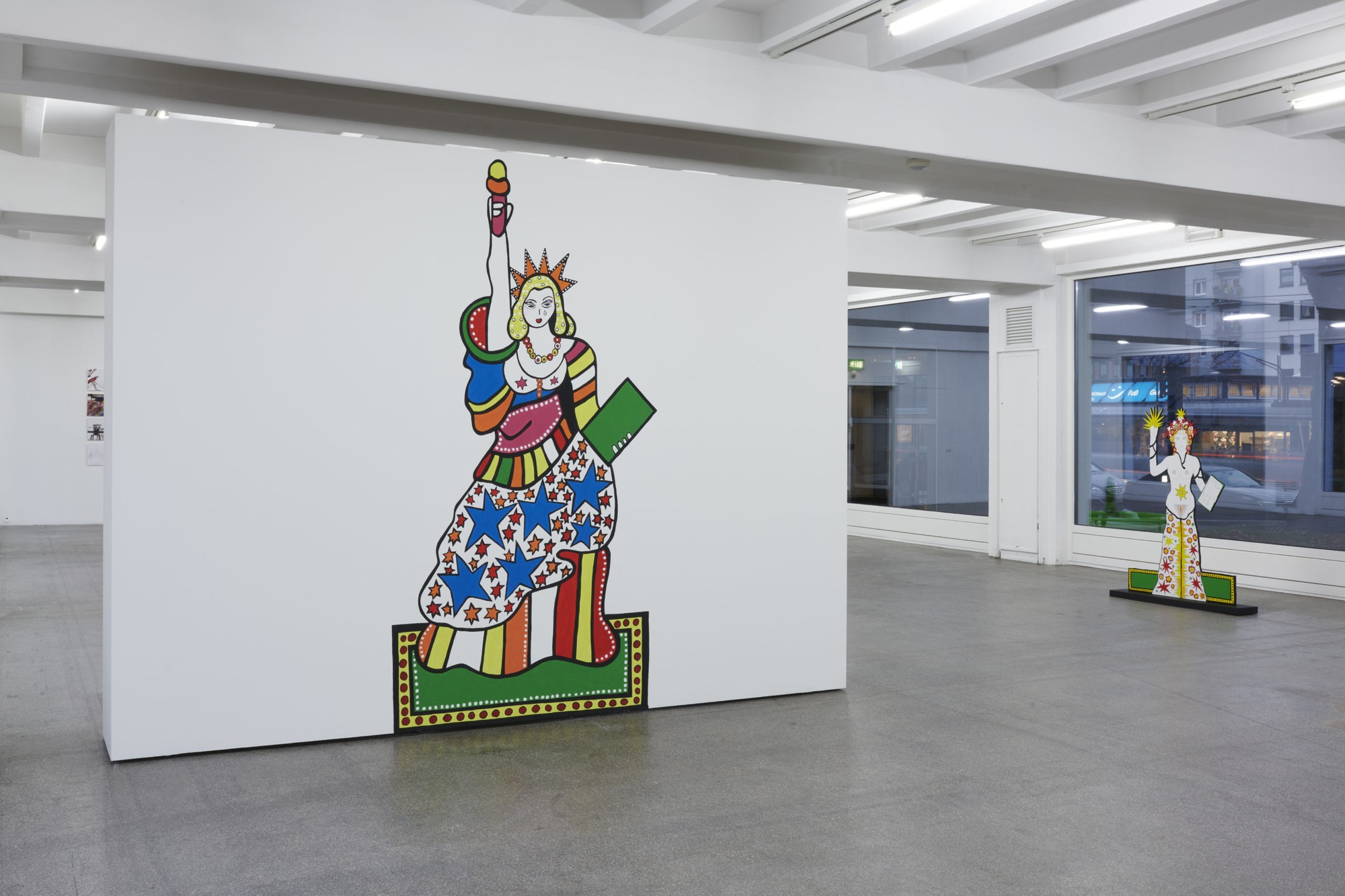 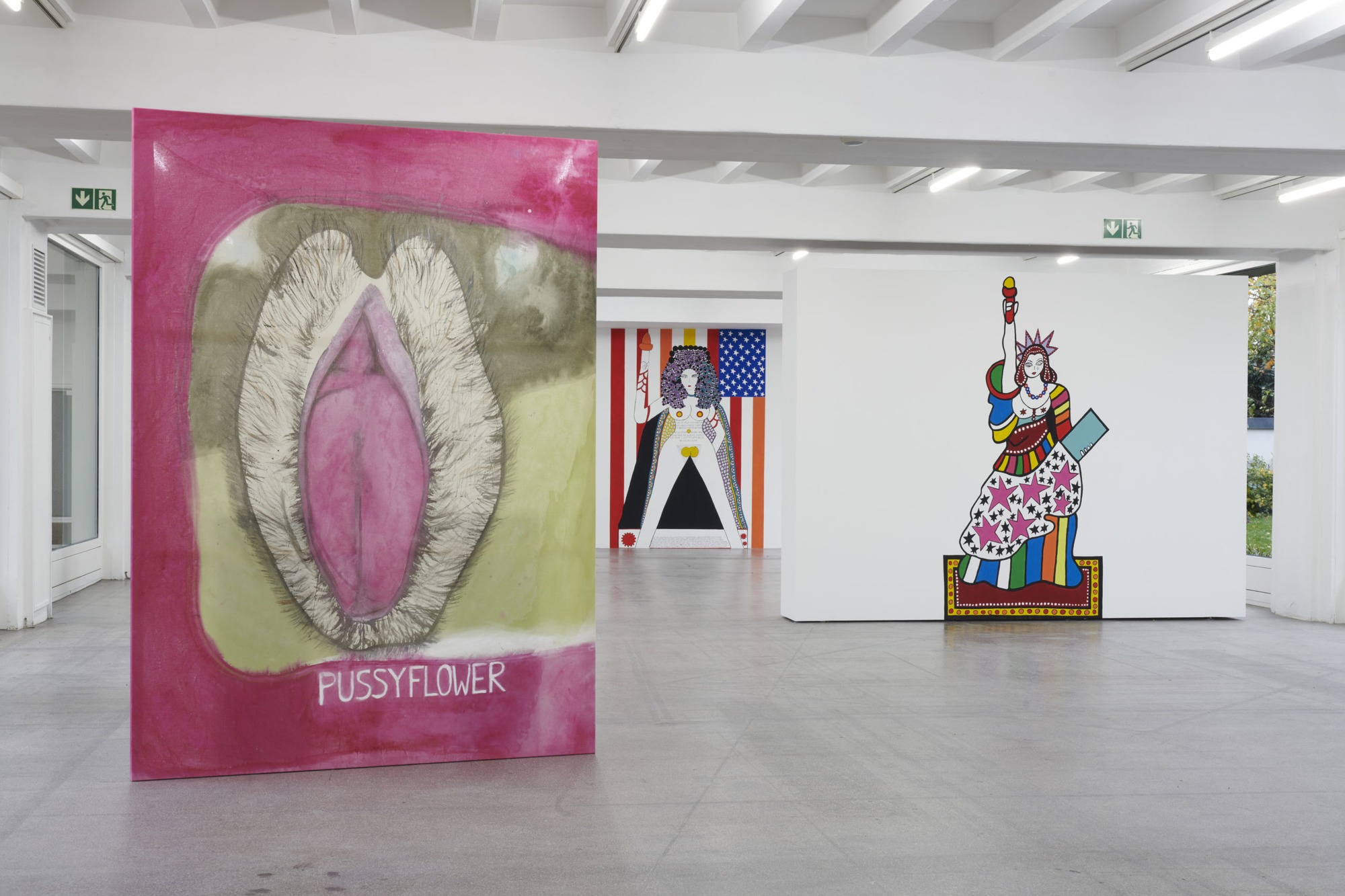 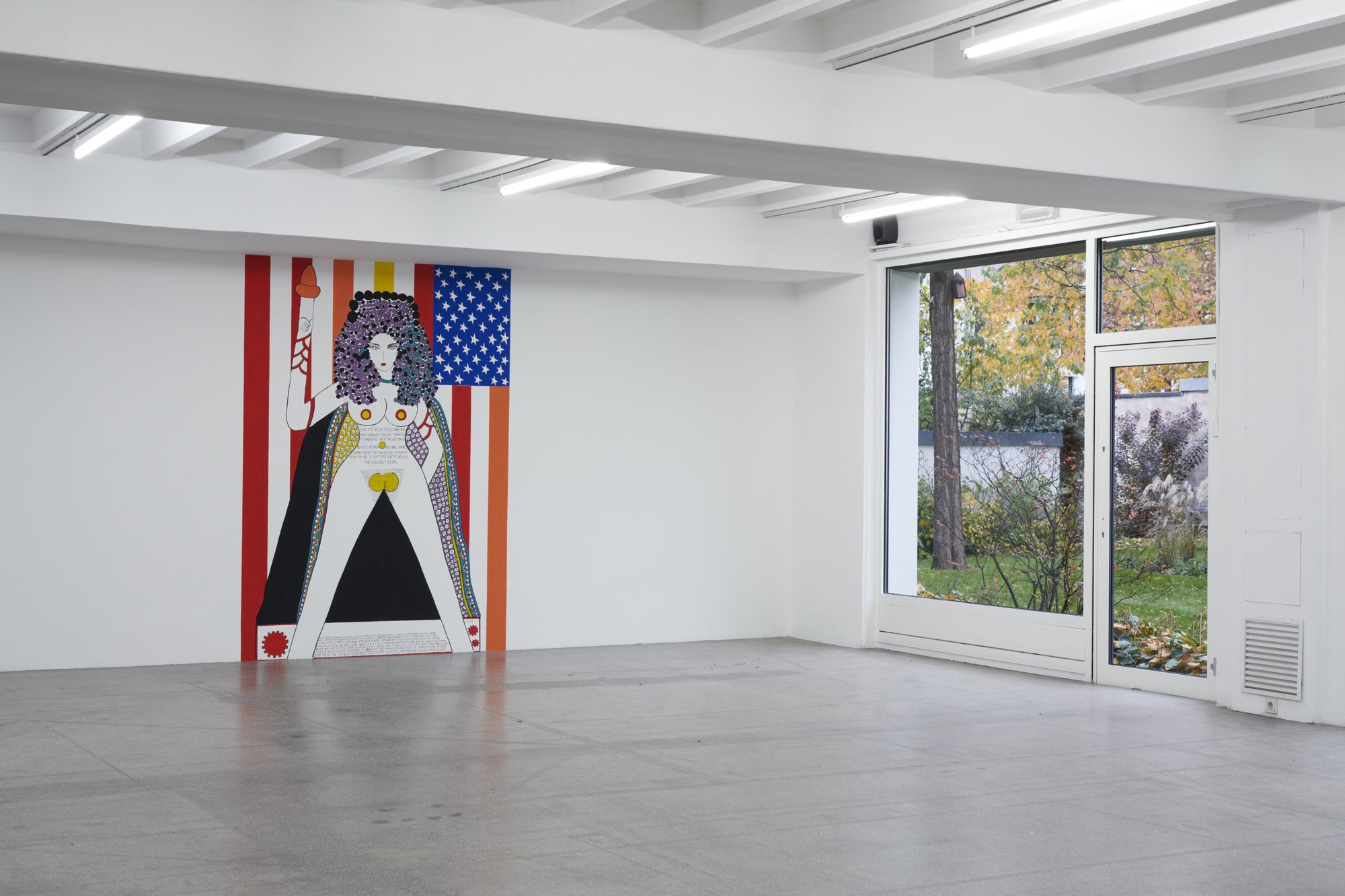 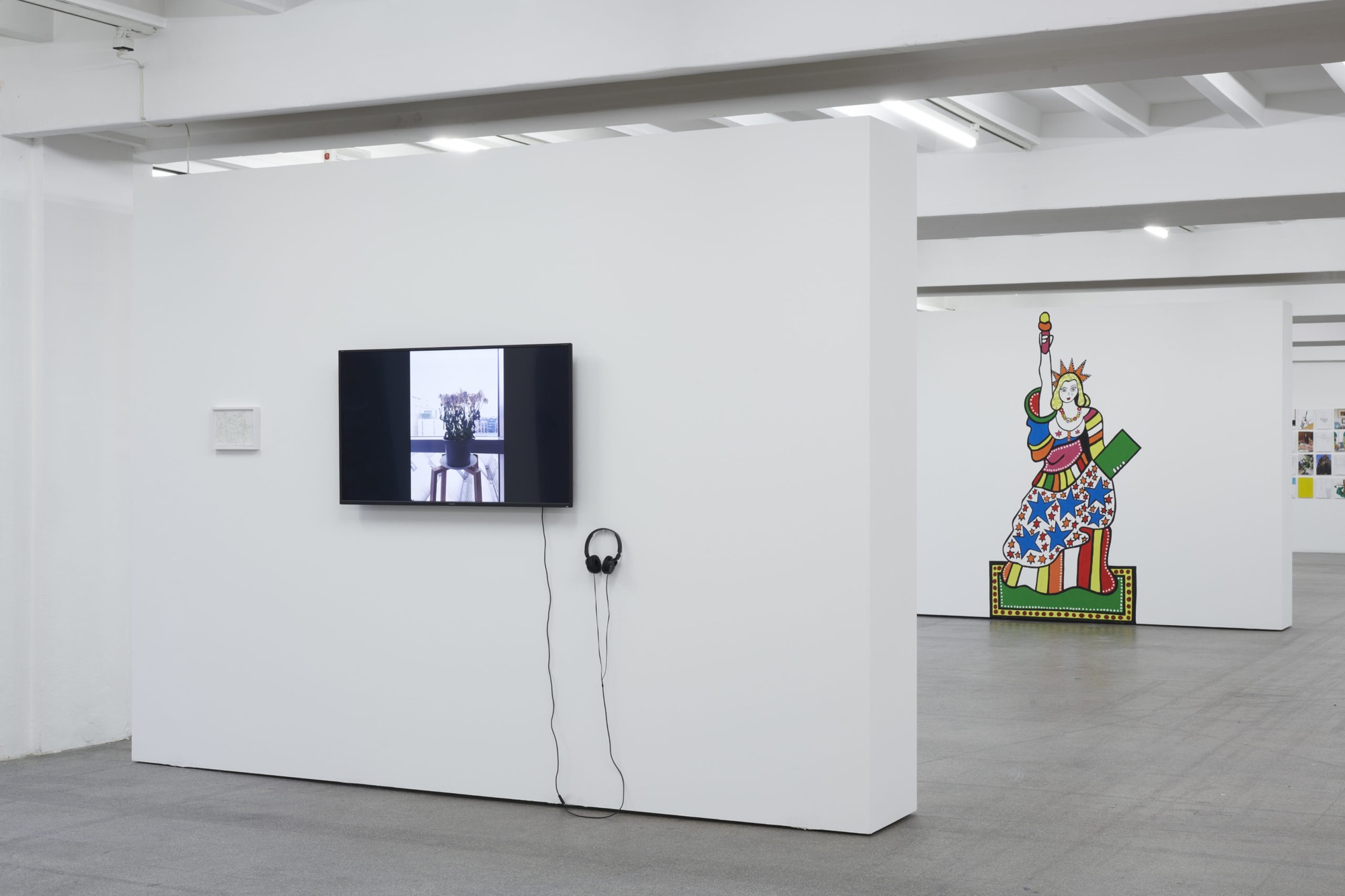 Life has no outside, say the psyche-celestial Ladies of Liberty with their microphones, say the fulgent cacti fountains, says the blooming pussy flower with an unmistakable wink.

This is the pact The Köln Concert stages with its audience, among its works, between its artists, Juliette Blightman (*1980) and Dorothy Iannone (*1930), who draw down time into all-encompassing symbologies of love, sex, care, work, autonomy, joy and other selfhoods. When I say symbol, I mean images that speak broadly and concentrate personally, that are partly mnemonic and partly divinatory, in which breakfast lives alongside Art Nouveau and narrative takes the place of noses. In The Köln Concert, forms, figures, messages layer in counterpoint, a leitmotif of sorts, the coexistence of harmony and clash played by Blightman and Iannone so that they too may listen.

Not that everything is practice but that practice reticulates: Blightman made the fountains in her stepfather’s garage, perhaps with her young daughter’s help. It is possible to imagine their visit to the hardware store to select the paint, a lurid yet somehow utilitarian green. Here in the world of handy things, also misappropriation, high jinks, making do, the phalluses’ gentle eruptions rely on whatever energy they can gather via solar panels; when stilled, they earnestly hold court as choruses performing in the rounds of paddling pools. Something’s always growing, which is to say requiring tending, in Blightman’s work. Children and plants, but also limitations, perspective, desire, sense of self: care is a matter of patterning, of understanding subject and process as one and the same. ‘Daughter’ is a process; so is ‘body’, so is ‘home’. The pencil and guache works in Stages of Seed Development (2020) appear at first as windows until their serialized arrangement suggests something more vociferous, perhaps phrases, at once contingent and complete.

These works in particular speak, sing, move to their muse, (Ta)Rot Pack (2016/1968-69), Iannone’s ecstatic allegory of her life with Dieter Roth, which offers some phrases of its own: ‘This Card Brings a Brief Respite Maybe’, says a nude Roth wandering a trippy Swiss path; ‘This Card Brings What Everyone Wants’, say the adorned lovers in tantric embrace. Iannone has said that this ability—to bring things—is the only way her cards reflect the (other) tarot. I would venture another: that the (Ta)Rot Pack, like Blightman’s Stages, celebrates a sense of everyday consequence that is not without a cosmic sense of humor.

Which may have something to do with itinerancy, an underlying cadence here. These works spring from places both loved and abided, and from the need amid frequent departures to sometimes return—to the United States, for instance, where Iannone and her Ladies of Liberty were born, to Germany, where Blightman first raised, and first painted, her daughter, and to the Rhineland specifically, where Iannone lived with Roth and began the (Ta)Rot Pack in the late 1960s. Image is how to get there: The Story Of Bern (Or) Showing Colors (1970), originally an artist book, shown in The Köln Concert as a diaporama, tells that highly generative periods are often live with contention and struggle. And that at the end of it all, when we finally surface, we can know only through reflection that the triumphal arc stands somewhere in the distance.

In the course of the exhibition, a joint publication will be produced.