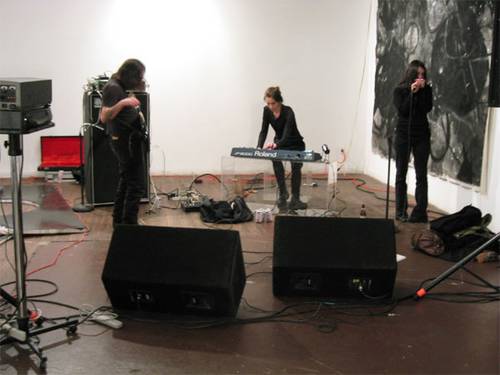 Jutta Koether, Electrophilia, New York 2002
Jutta Koether is one of the central figures in contemporary painting. But she is more than a painter. She is also a performance artist, musician, writer, critic and theorist.

Her role as an artist was long reduced as a feminist response to the Cologne scene of the late 1980s. With her translucent color fields, gestural brushstrokes, drawings of female bodies, and lyrical appropriation of poetry and art history, she often seems to take the opposite position to artists such as Martin Kippenberger, Sigmar Polke, and Albert Oehlen. However, as a critic and editor of the music and pop culture magazine Spex, as well as a performance artist and musician, Koether did not correspond to the typical job description of the art scene of the time.

Since the beginning of her artistic career, Jutta Koether has tried to make expansion her program. In doing so, it was always important to her not to take on a clear role as an artist, but always to work from several positions. Since she came to New York in the 1990s, she has been moving in an expanded field of experimentation and improvisation, literature and theory of the New York scene. Collaborations with musicians like Tom Verlaine (Television) or Kim Gordon (Sonic Youth) are often more important for her as inspiration than the works of visual artists. It is precisely through these apparent detours and alternative forms of energy that she has created a kind of free space for herself over the years, which in today’s situation enables the urgently needed reassessment of the medium of painting and its potential.

The exhibition at the Kölnischer Kunstverein is Jutta Koether’s first major solo show in Germany and presents for the first time a comprehensive selection of her work since the mid-eighties. With paintings, drawings, texts, video works and installations, Jutta Koether occupies all the rooms of the Kunstverein. She combines her various forms of expression with one another, creating experimental arrangements from which a flowing dynamic and openness develops.

A comprehensive catalogue will be published by DuMont Verlag to accompany the exhibition. Texts by Diedrich Diederichsen, Isabelle Graw, Martin Prinzhorn, Michael Kerkmann and a conversation with Jutta Koether, Sam Lewitt and Eileen Quinlan explain Jutta Koether’s various areas of work. The catalogue with 160 pages contains about 160 colour illustrations and is published in German and English.
www.koelnischerkunstverein.de