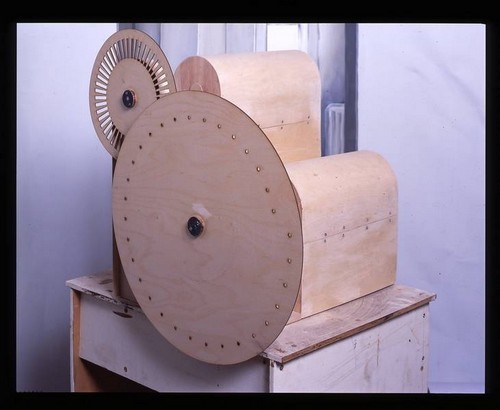 Mark Leckey (born 1964), laureate of the Central Art Award, is presenting a comprehensive solo exhibition at the Kölnischer Kunstverein under the title of Resident. This title refers not only to Leckey's residency at the Kunstverein but also to the idea of the exhibition, which is arranged along the main horizontal and vertical axes of the building. One of Leckey's characteristic strategies is to use his place of residence as a starting point for his work.

The horizontal axis of the exhibition space is devoted to Leckey's video installation Cinema in the Round (2007), in which he presents his collection of film, television and video quotations in a sort of performance lecture. Fascinated by how the images on the screen seem to come to life, the artist talks about the transitions between two- and three-dimensionality and the relationship between object and image. The sculptural quality of the films comes to the fore in Cinema in the Round, in the 16mm film Made in 'Eaven (2004) and the videos Felix gets Broadcasted (2007) and The Thing in Regent's Park (2006). Made in ́Eaven gives us the impression that the camera portrays Jeff Koons's famous Playboy Bunny from all sides. Only when we see the reflection on the shiny surface of the sculpture – which reflects the artist's studio, but not the camera – do we realize that the sequence was animated. It was transferred to 16mm film and is presented on a pedestal, like a sculpture. In The Thing in Regent's Park, we see a curious animated sculpture (by J. D. Williams) walking through Regents Park in London, taking the same route that the artist uses to go to his studio every day. Mark Leckey will also use a zoetrope – a device that creates the illusion of moving images – to cause a reproduction of the rooster figure in front of the Kunstverein building to appear to walk.

Mark Leckey also took the publicity for the exhibition in hand. He turned two windows of the exhibition space into display windows to present his artistic production to passers-by, prolonging in this way the row of small shop windows in Hahnenstraße.

The vertical axis runs from the basement to the Theatersaal, presenting works in which Leckey considers the mechanisms of television. The centre of attention is the cartoon figure Felix the Cat, which was used in the 1920s as test pattern for the first television broadcasts in the USA. Leckey constructed a kind of film set for the cartoon figure on the stage of the Theatre space, recreating props from a photograph of the origianl set. A humerous 16mm Felix cartoon is shown in the cinema, and in the basement there is a sound sculpture in the shape of a heater which appears to fire the installation from below.

In May Leckey will hold a live performance in the film set installation on the stage. He will give a lecture on his ideas about the history of television, its significance and decay including the role of the BBC in this context.

In the 1990s, looking for new forms of expression in the medium, Leckey cut and manipulated music and found footage to make video-clips of his own. Today, however, image, film and television sequences have become easily and freely available on the Internet and the sampling technique has become a standard art form. This new situation has led Leckey to deal more closely with the making of his „own“ images and to consider the role of art and the place of art production in his videos and installations. Leckey became known through his videos, but also for his work with the band Jack2Jack. Together with Ed Liq, Bonnie Camplin and Enrico David, he created the band donAteller. Leckey recently had a solo exhibition at Le Consortium in Dijon, following projects at the Portikus in Frankfurt, the Migros Museum in Zurich, the Tate Britain in London and participation in group exhibitions at P.S.1/MoMA, Dundee Contemporary Arts and the Manifesta 5. Mark Leckey is professor of film at the Städelschule in Frankfurt.

Mark Leckey at the Open Space, Art Cologne, 16.4. - 20.4.08
At this year's Art Cologne, the Kölnischer Kunstverein will be represented for the first time by an installation - referring to the exhibition of the Central Art Award laureate – at the Open Space. Mark Leckey will present his i (2007), which reproduces his London apartment as a film set. In conjunction with the exhibition Leckey has produced a limited silk-screen edition for acquisition by members of the Kunstverein.

Presentation of artist donations at the Kunstverein, 17.4.–8.6.08
Parallel to Art Cologne, an exhibition of donations by exhibited artists to the Kunstverein collection will be held in the archive room. It will feature works by Pawel Althamer, the Atlas Group, Bernd and Hilla Becher, James Beckett, Ulla von Brandenburg, Matti Braun, Thea Djordjadze and Manuela Leinhoß, Olivier Foulon and Willem Oorebeek, Heinrich Hoerle, Viola Klein, Peter Kogler, Lisa Lapinski, Alan Uglow, Walter Dahn, Dan Perjovschi and Clemens von Wedemeyer and others. As in previous years, the annual editions programme for 2008 will be presented in autumn.