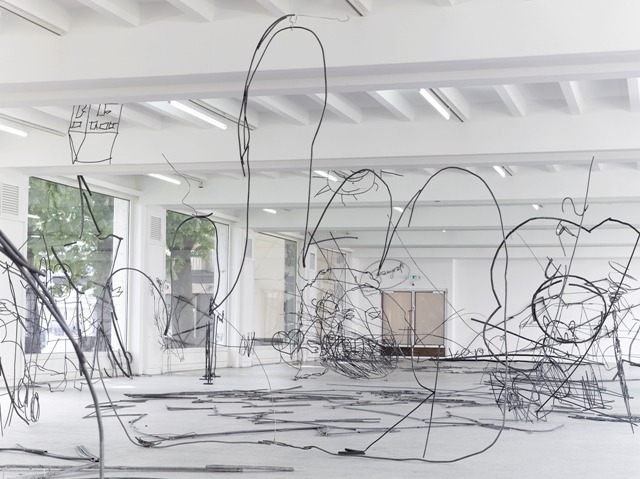 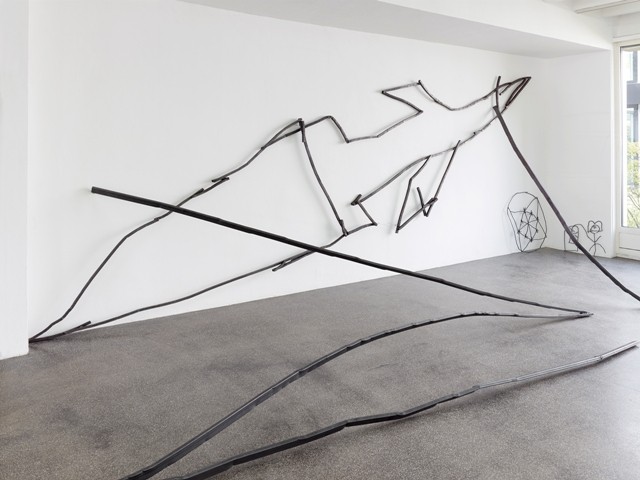 Petrit Halilaj, exhibition view, Kölnischer Kunstverein 2015, photo: Simon Vogel
In installations, drawings and films Petrit Halilaj (*1986) deals with the experiences he gathered in this period: with a great capacity for empathy, he examines thematic complexes including homeland, memory and identity. At the same time there is always something universally valid bound up with the artist’s works, which resemble a materialisation of the world of the storytellers. In this way they speak to and lastingly touch their viewers, regardless of those viewers’ relationship to the recent history of south-eastern Europe.

For the exhibition at the Kölnischer Kunstverein, Halilaj has created an entirely new group of works related to his former school in Runik (Kosovo). The artist has used thin steel rods to reproduce greatly enlarged versions of doodles and drawings once left behind by pupils on the seats and desks of the classrooms. In spite of their clearly sculptural form, the objects still preserve a graphic character and develop an effect suggesting delicate drawings in space. The depicted motifs include houses, hearts, birds, flowers, cars, aeroplanes, rockets and rifles, and they are simultaneously witness to the hopes, yearnings and dreams and to the doubts, fears and worries of the children and adolescents of that time. In the exhibition Halilaj concentrates the individual objects into a complex installation in such a way that the thoughts reflected in the sculptures overlap and become interwoven with one another.

Along with the sculptures and installations, Halilaj is also presenting a new film and a series of prints, which are likewise related to the artist’s former school; however, they draw attention more towards the aspect of the educational institution’s authority.

A collaboration between the Kunst- und Ausstellungshalle der Bundesrepublik Deutschland, Bonn, and the Kölnischer Kunstverein, Cologne. The first comprehensive monograph on the artist’s work will appear on the occasion of the exhibitions.
www.koelnischerkunstverein.de