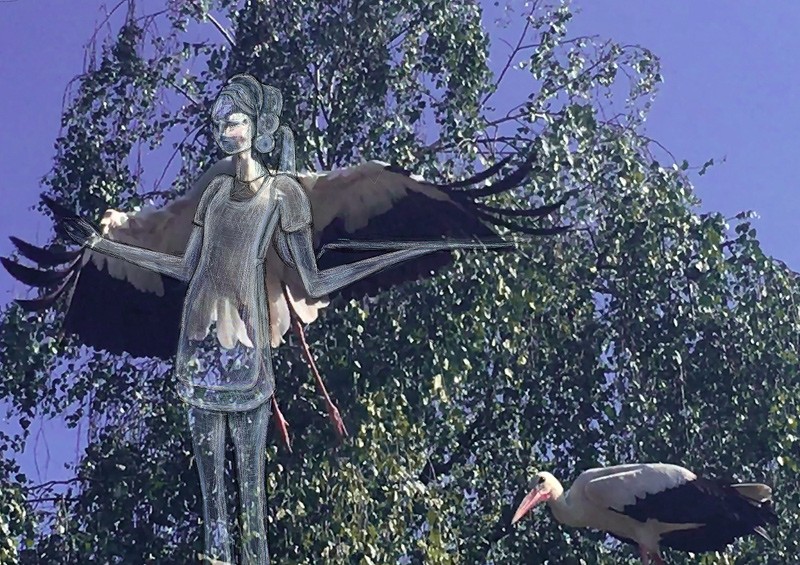 Sam Anderson, Big Bird, Kölnischer Kunstverein 2017
Sam Anderson was born in Los Angeles in 1982. In the recent past she has developed a body of work in which she examines the existential conditions of human life on the basis of her own biography and stories from her social milieu. Her artistic practice is focused on sculpture and installation, although she also makes films at regular intervals. The works of the artist, who now lives in New York, additionally range from narrative visual creations to almost indecipherable (and therefore seemingly abstract) formulations. Thus, in Anderson’s art, figures formed out of epoxy clay – such as a kneeling girl, a rider or a fishing teenager – meet with material collages that are based on a variety of sometimes found materials and objects – such as broken glass, feathers, pieces of wood, grape steams, flowers or grasses – and are structured according to definite but now always comprehensible criteria. The found animal skeletons, which are also a part of her repertoire and transfer another dimension of reality into her work, are to be situated between these two extremes: the unambiguously narrative sculptures and the scarcely interpretable arrangements.

Independently of the sculptures’ formal appearance, special importance is to be assigned to the relationship between object and space. The works are designed to play with proportions and, in this context, the surrounding architecture serves to indicate scale. Every form of monumentality is subjected to a negation in the process, as is particularly underscored through the fragility of many of the pieces. For viewers, this situation means a continuous bird’s-eye view of the works, which Anderson joins into complex installations in their presentations. The interplay between the pieces causes the American artist’s presentations to behave like staged landscapes. It is precisely through her combination and intertwining of dissimilar works that she evokes the distinctive interactions and charged relationships which breathe life into the artworks and arrangements and substantially contribute to their fascinating effect. The artist creates pictures that not only appear no less lifelike than remote from life, but also mean an expansion of sculpture’s range of possibilities.

A similar potential is connected with Anderson’s films, which once again reveal her occupation with collage techniques. To create them she combines her own or found footage, accompanied by music and speech, into new narratives. Dream-like scenarios are also composed in these works; however, in contrast to the sculptures and installations, they are substantially more strongly anchored in the here and now.

The unique nature of Anderson’s work has brought her considerable renown in recent years, and she has already been included in several important exhibitions. The artist has had solo exhibitions at Rowhouse Project in Baltimore (2016), Tanya Leighton in Berlin (2015), Mother ́s Tankstation in Dublin (2015), Between Arrival and Departure in Düsseldorf (2015), Off Vendome in Düsseldorf (2014) and Chapter NY in New York (2013). She has additionally participated in group exhibitions, including “ICHTS” at the Dortmunder Kunstverein (2016) and “Greater New York” at MoMA PS1 (2015).
For the Kölnischer Kunstverein Anderson has developed a complex survey of her work that encompasses both older and new pieces, in order to enable visitors to gain extensive insight into her practice. In addition to the central exhibition hall and the cinema, the neighbouring cabinet of the Kölnischer Kunstverein will also be used to enable visitors to tour through Sam Anderson’s various narratives and formulations.

The artist’s first catalogue as well as an edition of unique works will appear in connection with the exhibition, which is presented in cooperation with the SculptureCenter in New York.
www.koelnischerkunstverein.de