Or the Unprepardness Prometheus and Pals 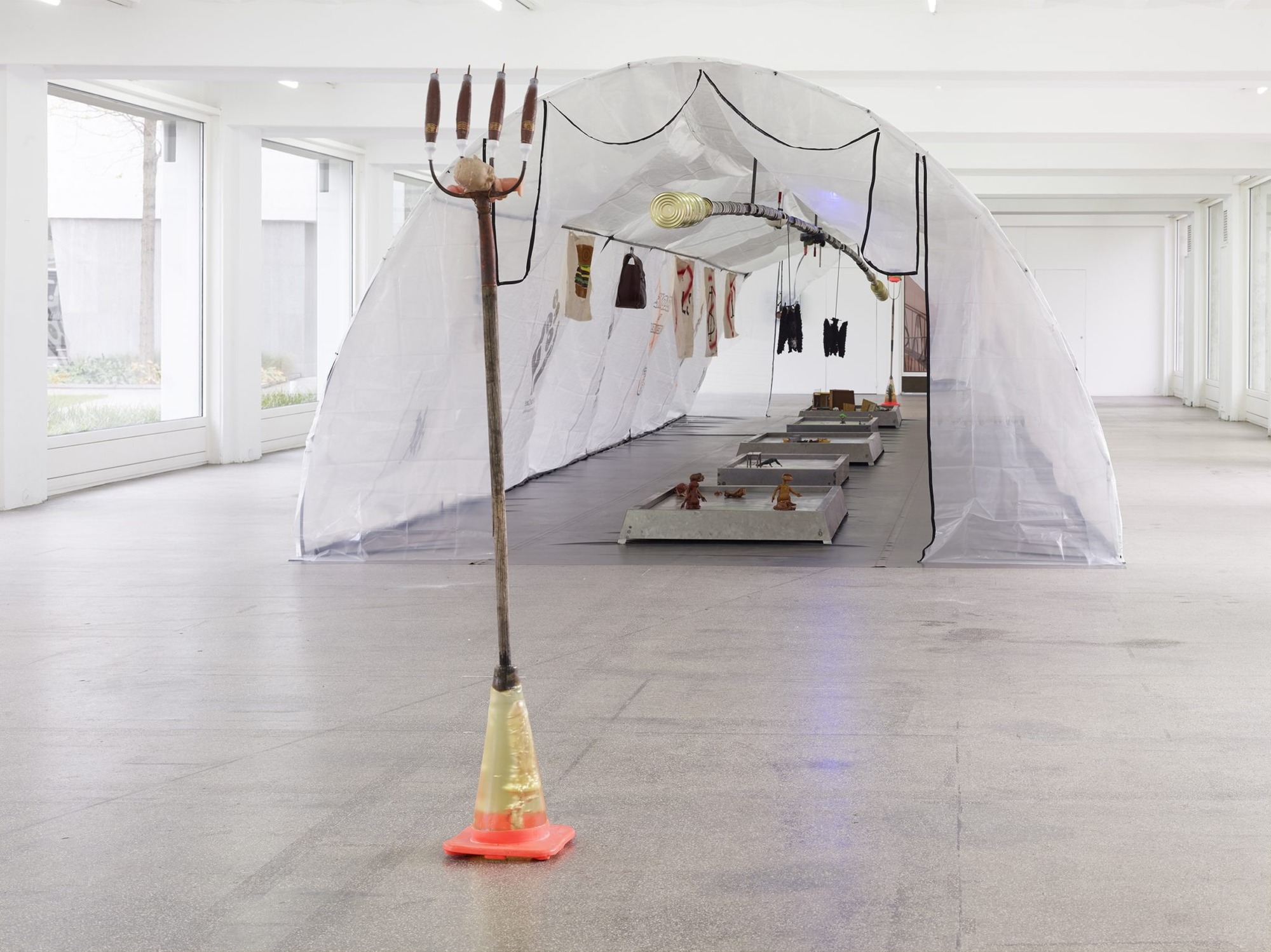 Stephen G. Rhodes, exhibition view, Kölnischer Kunstverein, 2015, photo: Simon Vogel
The installations of the artist Stephen G. Rhodes, who was born in Houston in 1977, are characterised by the use of diverse media and materials and are generally of an expansive nature. The works usually take historical events, social phenomena and art historical or film historical positions as their points of departure: the artist subjects these to analysis, compares them with alternative value systems and translates them into his own linguistic system. For his exhibition at the Kölnischer Kunstverein – his first institutional solo exhibition in Germany – Rhodes has created a new film for the cinema as well as a complex, walk-in installation for the exhibition hall.

The show is centred around two places whose divergent developments Rhodes has linked together within the context of his exhibition and used as the basis of a narrative. The first of these is the Bayou Corne Sinkhole, located in a swampland in the south-east of the US state of Louisiana, and the second is Malta’s Sweethaven Village. The sinkhole developed in 2012, when the fracking procedure that an American company was employing in the area led to underground cave-ins, and the above-ground terrain was pulled down into the depths. In the period that followed, hundreds of local residents were evacuated from the nearby community in order to protect them from the menace of additional cave-ins.

By contrast, Malta’s Sweethaven Village has a less burdened background and functions, in a certain sense, as a counterpart to the American disaster site. The village was created in 1979/80 as the backdrop for the director Robert Altman’s film Popeye. Because of the expense involved, it was not torn down after shooting was completed, and this eventually resulted in the residents of the island transforming it into an amusement park.

The world of the imagination – as it has manifested itself in the Sweethaven Village – is thus confronted with the reality of industry, which borders on the realm of the unimaginable in the case of the Bayou Corne Sinkhole. At the same time, Rhodes links the stories of the two places with the immediately topical aspect of fleeing – or, alternatively, leaving – as well as the mythological figure of Prometheus and the main characters of Mary Shelley’s novel Frankenstein.

Stephen G. Rhodes lives and works in Berlin and New Orleans. He has had solo exhibitions at the Migros Museum in Zurich (2013) and at the Hammer Museum in Los Angeles (2010). He has additionally participated in group exhibitions, including those at the Kunst-Werke in Berlin (2015), the CCA Wattis Institute for Contemporary Art in San Francisco (2011) and at the New Museum in New York (2009).
www.koelnischerkunstverein.de