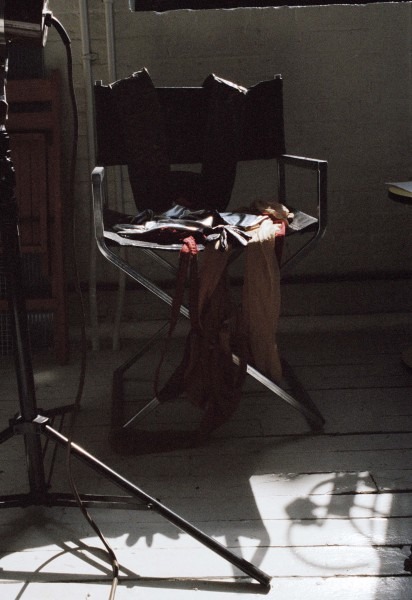 Talia Chetrit, announcement for the exhibition Showcaller at the Kölnischer Kunstverein 2018
The photographic work of Talia Chetrit (B. 1982, Washington D.C.) is characterized by a remarkable compositional sophistication and visual power, accompanied by a stringent programmatic objective. Her work includes self-portraits, portraits of family members, lovers, and friends, nudes, still lifes, and cityscapes that continuously reveal various intentional references to art history. Chetrit occasionally draws from photographs taken during her youth and re-contextualizes these images by inserting them into her current practice through a selective editing process.
Regardless of the respective subject matter or approach to the development of each image, her interest resides in researching and disclosing the basic social, conceptual, and technical conditions of the genre of photography. As a result, her work is imbued with the desire to control the physical and historical limitations of the camera, to follow its manipulative potential, and to call the relationship between the photographer and the image into question.

The exhibition Showcaller, which Chetrit conceived especially for the Kölnischer Kunstverein, comprises a group of predominately new and revisited works that give exemplary insight into her practice. The presentation includes an extensive series of pictures titled Streets, which depict lively and inhabited views of New York City. Through the use of tight cropping of grainy negatives, the city and its people become an unknowing and abstracted network of bodies over which Chetrit can command her own manipulated narratives. Taken from afar and through the windows of various buildings, the distance between Chetrit’s pervasive lens and her unwitting subjects’ anonymity is further emphasized.
In the context of the exhibition, this series of works is juxtaposed with photographs that convey an alternative perspective, and instead instill a pronounced sense of intimacy through the conspicuous disclosure of private moments. A large-format diptych, for example, depicts the artist and her partner having sex. Imaged against a blooming landscape, neither of the subjects seem aware of the camera’s austere gaze. The viewer is tethered to the scene by the twisting cord of the camera’s cable release, in such a way that we are reminded, once again, of our own position in the construction of images.

Talia Chetrit was born in Washington D.C. in 1982 and now lives in New York. She has recently participated in solo and group exhibitions at the Whitney Museum of American Art in New York (2016), Art Gallery of Ontario in Toronto (2016), LAXART in Los Angeles (2014), Palais de Tokyo in Paris (2013), Studio Voltaire in London (2013), and the SculptureCenter in New York (2012). In 2018, she will be presented to a wider public in Italy for the first time at the MAXXI Museo nazionale delle arti del XXI secolo in Rome.
www.koelnischerkunstverein.de