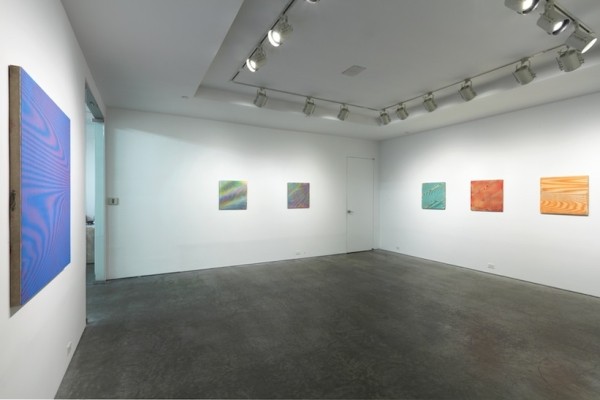 “All is number” is a dictum attributed to the philosopher and father of modern mathematics, Pythagoras. The contemporary understanding of this dictum may well be that everything in the universe is knowable and can be reduced to measurable components, logical explanations and cause-effect ratios. Rational as this dictum sounds however, the Pythagoreans actually believed that numbers were in fact the essence of things.

Introducing a distinct and esoteric interpretation of this phrase the Pythagoreans ascribed specific meanings and characteristics to each number. The number three, for example, represented harmony, while the number six represented creation. The study of mathematics, the basis of all contemporary hard science, is actually rooted in two worlds, one of quantifiable reality and one that contemplates the immeasurable.

The exhibition opens onto an installation of six white paintings by Olivier Mosset in the front gallery. Each monochromatic surface conceals two preceding histories. In the early 1990s, these monochromes, then of various colors, were exhibited together. Years later, all paintings in this series were painted uniformly white and exhibited again. Not completely satisfied with the results, the artist re-painted each work with a different white paint a few years later. Each resulting monochrome is an accumulation of monochromes.

Installed alongside Mosset’s monochromes, are two sets of three consecutive date paintings by On Kawara. Despite the congruency of their strictly factual format, each three-day period marks an intense phase of mounting cultural fears, first in anticipation of a space shuttle disaster (The Discovery) then in reaction to an unanticipated natural disaster (Hurricane Katrina).

In the center gallery are three photographs of windows staged and captured by Luisa Lambri. Each potential vista from Casa Luis Barragán in Mexico City is occluded to varying degrees by an articulated interior shutter that the artist folds to modulate light. Lambri at once acknowledges and inverts the traditional hierarchy of a commanding view to the outside by privileging the domestic space of architecture. Her considered extrapolation pays homage to Barragán’s skillful integration of interior and exterior worlds.

In the back gallery, Heimo Zobernig’s installation of six projection screens addresses the inescapabilty of subjectivity in aesthetic perception. Rather than obscure the desire for psychological projection, Zobernig elicits us literally by presenting six portable screens ready for reception.

By virtue of their proximity, Anoka Faruqee’s recent moiré paintings could be mistaken for vivid televisual noise that escaped the neighboring screens. Close up, one finds that the tidy optical patterns are more aleatory than they might seem. Using custom made-rakes and tools, Faruqee lays down and sands multiple layers of acrylic to develop ornate moiré patterns over time. She isolates these unwanted graphic effects common to printed imagery and redirects the malfunction into an aesthetic end goal. Her insistently optical works obfuscate their inherently physical processes. As is the case with Mosset’s monochromes, temporal evidence reveals itself at the edges.
www.koenigandclinton.com