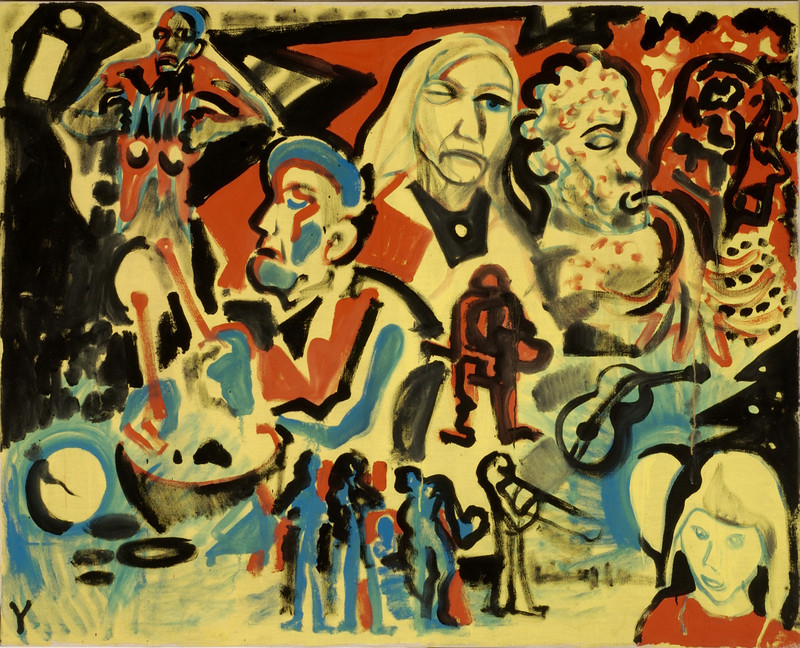 The name A.R. Penck is an amalgam. Embedded within the borrowed name of a glacial geologist (Albrecht Penck), the initial "R" is the sole reference to the artist's given name, Ralph Winckler. Throughout his career, and especially during the 1970s, A.R. Penck deployed a long list of monikers including A-Y, Mike Hammer, Mickey Spilane, T.M., Tancred Mitchell, and Theodore Marx amongst others. Although these artistic alter egos may seem playfully duplicitous to viewers today, they were also born of a certain practical necessity.

During the 1970s, A.R. Penck lived and worked in what is now the former German Democratic Republic. Despite official espousals for a culture of "Weite und Vielfalt" (often translated as "diversity and vastness") the government's administration stridently censored, edited, and dictated aesthetic innovation. To skirt the intense scrutiny of the G.D.R. and to safely transport his artworks to the West, Penck continuously invented witty aliases. The singular "R" symbolically anchored an identity that shifted as poetically as it did strategically.

The 1970s also marked a period of prodigious output and great hardship for the artist. The works assembled for this exhibition convey the breadth of Penck's intense experimentation while highlighting the resource with which he responded to a paucity of materials. At this time, Penck often over painted earlier works and then collaged newsprint and paper onto canvas. He frequently combined ordinary household items such as cardboard, newspaper, wall paint, tin cans and twine. In so doing, Penck developed a material economy alongside a burgeoning visual vocabulary.

Penck's paintings and sculptures brim with primordial signs, allegorical figures, wild patterns, charged icons, oversized shapes and annunciated gestures. Titles such as "Struktur" underscore Penck's all over method of painting as well as his attention to spatially stacked picture planes. In the "Standart" series that A.R. Penck refined throughout the 1970s one finds particular references to science, mathematics, cybernetics and communication theory. The word "standart" often refers to a flag, or quantifiable unit of measure. Within the purview of Penck's cosmology, the artist equates "standart" with a systemized language, designed to impart a rational interchangeability to art making or viewing. In 1980, Penck emigrated to West Berlin and in the years following his work would elicit associations with the Neue Wilde artists much in the same manner that his work from the 1970s elicited associations with Fluxus. Even today Penck's attention to universal signification remains both personal and singular.

A.R. Penck (b. 1939, Dresden) currently lives and works in Dublin and Dusseldorf. Often associated with artists Georg Baselitz, Jörg Immendorf, Markus Lüpertz and Per Kirkeby, Penck's work has appeared in numerous international exhibitions including the Museum Haus Lange, Krefeld, Germany; Nationalgalerie, Berlin; Irish Museum of Modern Art; the Los Angeles Contemporary Art Museum, Bern Kunsthalle, Schirn Kunsthalle, Frankfurt, and Kunsthalle Kiel. His work was featured in Documenta V (1972), VI (1977), VII (1982), IX (1992), and the 41st Venice Biennale (1984, in conjunction with Lothar Baumgarten). Penck has been awarded the Will Grohmann Prize of the Academy of Arts in West Berlin; the Rembrandt Prize by the Goethe Foundation in Basel; the Artist's Prize by the city of Aachen; and the NORD/LB prize for art. His work resides in many permanent collections including the Museum of Modern Art, New York; the Museum of Contemporary Art, Chicago; Tate Modern, London; Kunstmuseum Basel; and the Martin Gropius Bau, Berlin.
www.koenigandclinton.com