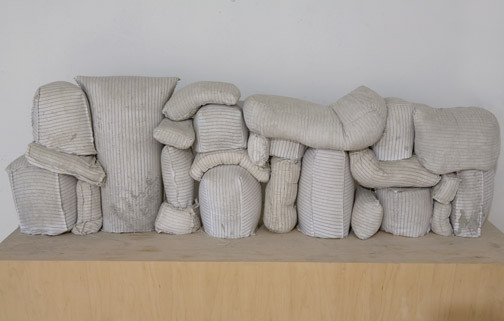 Twentieth-century theories about sublimation inform the framework of Dark Christmas, a tongue-in-cheek nod to the artists' use of Christian and secular iconography, as well as their profound engagement with the body. Inspired by the seemingly destructive, anarchic possibilities of works by Georg Baselitz, which hint toward concurrent regeneration for both artist and audience, Dark Christmas takes shape around the deliberate urge against / manipulation of sublimation. The exhibition showcases the brute within, sexual urges, fears of failure and death, responses to strict social and religious mores, and unmediated emotional purges. Each object and the daring trajectories of their makers remain a rare and welcome counterpoint to contemporary trends and discourses that limp alongside the raw veracity of these artistic figures.

The iconic artworks in this exhibition were deemed obscene upon their respective unveilings, causing controversy in the art world and beyond. Baselitz's painting The Big Night Down the Drain (Die Große Nacht im Eimer) from 1962-63 -- the study is included here -- and Andres Serrano's 1987 photograph, Piss Christ, are two such hackneyed examples. The Big Night Down the Drain is at once a highly charged self-portrait about masturbation and a direct confrontation with a post-war German society intent on avoiding social and psychological questioning; the painting was confiscated upon its debut and the artist and dealers fined. Serrano's Piss Christ, a photo of a crucifix submerged in the artist's urine, served as a catalyst for the American culture wars of the 1990s when U.S. senators publicly lambasted Serrano for receiving funding from the National Endowment for the Arts.

Paul McCarthy's 1974 performance Hot Dog also uses exposure of the body and its related functions to challenge an ambivalent society. McCarthy's inexhaustible capacity to shock remains central to his artistic practice; even during the proliferation of contemporaneous performance art that was frank in its sexuality, violence, and masochism, McCarthy's unrestrained gluttony proved particularly difficult to endure. Hot Dog proved a pivotal performance in the artist's career as his work turned darker and more anxious. Using food as a medium to expose the politics and rituals of consumption in post-war American society, McCarthy's self-conscious acts of regression upended all assurances of social stability.

The work of Hans Bellmer is similarly unsettling, particularly with its insistence on rituals of self-abuse and the dissolution of basic categories, which Georges Bataille articulated as the essence of perversity in his notion of l'informe, a theory often linked to strategies of repulsion and debasement in contemporary art practice. This theory can be applied in broad swaths throughout Dark Christmas, but no where is does it alight so perfectly as on the Bellmer's Study for Georges Bataille's "L'Histoire de l1oeil" ("The Story of the Eye"), a 1946 illustrated novella detailing the sexual perversions of adolescent lovers. Bellmer's personal relationship with artist and poet Unica Zürn, whose work is also featured here, is another, more tragic, connection; Zürn killed herself in 1970 by leaping out the window of the artists' apartment.