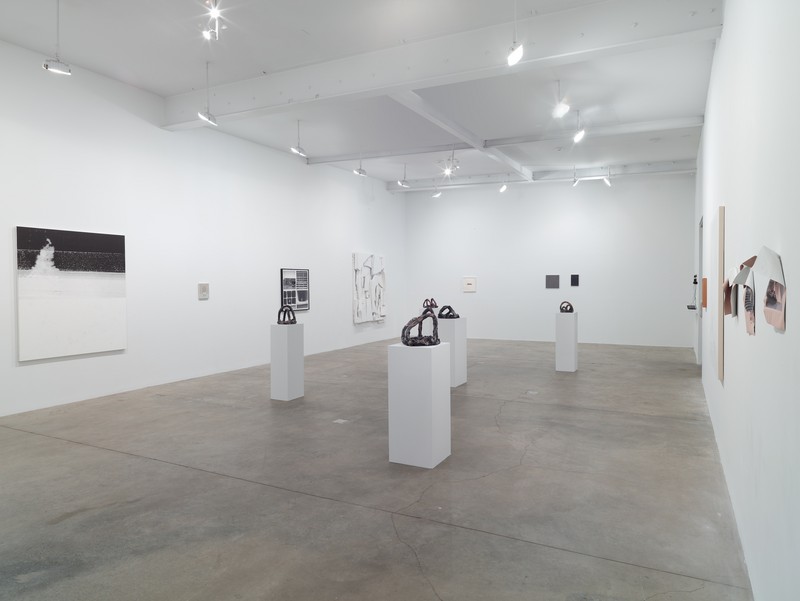 Koenig & Clinton is pleased to announce Fixing a Hole, a group exhibition that is fixated on fixing in two senses: fixing as a means of mending, and fixing as a means of securing. Seizing the contranym potential for divergent interpretations, we have gathered a selection of works in various media. Whether by accident or design, the participants in this exhibition capture or address voids, elisions, reliefs, and absence. In all instances, the senses turn to the pre-lingual whole that is now missing.

From a distance, Yoshiaki Mochizuki’s slim panels might initially be mistaken for a dark breach receding back through the surface of the wall; in contrast, A.K. Burns physically stops a hole in the wall with a penny, managing to suspend a canvas in between. Tamar Halpern resists digital seamlessness by cutting up and collaging inkjet compositions as Cameron Martin tones down an image of nature for the purpose of focusing on mediation. Alexandre da Cunha constructs a photographic installation of coastal landscapes that are skillfully pared to the point that they resemble graphic flags.

At five separate listening stations, one can hear Vito Acconci read Acconci Studio’s elaborate proposals for phantom buildings while Anna Sew Hoy’s ceramic sculptures present models for future spaces of contemplation. Paul Ramírez Jonas applies brushstrokes to censor the sheet music of popular protest songs, altering the score and limiting the notes that can be played or heard. Daniel Turner’s used PVC cover recollects the contents that have long since faded away, while Nancy Holt’s four perspectives on industrial building materials engender timelessness. Ken Price’s mangled mass bulges in anticipation of the daring freeform shapes that he would later mould, and Carolyn Salas’ wall reliefs form an illusion of space with materials that are not what they seem. In an acrobatic finale, Roman Signer takes down a fan to spin the bottle, tracing a circle in air.

Quietly situated in the center of the room, Peter Dreher’s No. 0 painting of an empty water glass retains its position on the wall from our last exhibition.
www.koenigandclinton.com