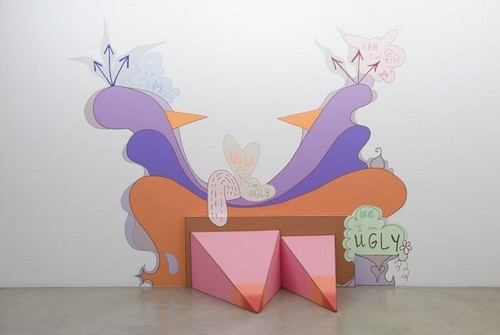 “What is so amazing about her works, when you first see them, is that they look like a teenage girl kind of thing...You know, there is something astounding in the work’s simplicity that is almost terrifying to me. What it really makes me think of is going to the dentist and getting laughing gas, they always have very banal pictures on the ceiling that you are supposed to look at while you’re getting your teeth filled. Well I think it’s like that with her work.”

Leo Koenig Inc. is delighted to announce a solo exhibition by Lily van der Stokker entitled Terrible and Ugly. Utilizing bright colors and graphic punctuation, van der Stokker creates a sort of “romper room” for adults. For more than twenty years, van der Stokker has been making work which unashamedly addresses the everyday and the ordinary in a language she has made entirely her own. Phrases written on walls are sometimes general, in a buoyant greeting card way, sometimes personal, revealing tidbits from her life and friendships. Throughout her career, text, combined with curlicues, puffy clouds and flowers, have always been impossibly exuberant, optimistic, pretty and decorative, making her work the antithesis of “bad boy art.”

Recreating the gallery to suit her vision, van der Stokker has painted three enormous wall murals in the front room, and will display a number of works on paper as well as murals in the back room. The two rooms have effectively been cut off from one another, and the back room can only be accessed through a diminutive door whose purpose, it would seem, is to alter the viewer’s perspective towards an “Alice in Wonderland” state of mind. When commenting on her work, van der Stokker has said “I like to make things that have as little meaning as possible...To give useless information, and see it as a relaxation.”

For this exhibition Lily van der Stokker continues her series of “Ugly” works that have been shown at venues such as the Aspen Museum and the Boijmans Museum in Rotterdam. Starting with a simple drawing on paper, van der Stokker has decided to concentrate on the parts she deems as “failures.” And within those failures, she has blown up the most “offending” details of the failed drawings. Inspired by critics who have maligned her work, she sees this series as an extension of earlier series of works with titles like “Extremely Experimental art by Older People.”

Lily van der Stokker has an upcoming catalogue entitled “It Doesn’t Mean Anything, But It Looks Good,” detailing her exhibition “No Big Deal Thing” at the Tate St. Ives, in Cornwall. She has exhibited extensively in both Europe and the U.S. Some of her most recent exhibitions have been “Terrible” at the Museum Boijmans, Rotterdam, Netherlands, “To The Wall,” with David Shrigley at the Aspen Art Museum, and” Plug In#52” with Jim Iserman at the Stedelijk Van Abbemuseum in Eindoven, NL. She lives and works in NYC and Amsterdam.

Gallery hours are Tuesday through Saturday 10-6 pm. For further information or visuals, please contact Elizabeth Balogh or Nicole Russo at the gallery.
www.koenigandclinton.com