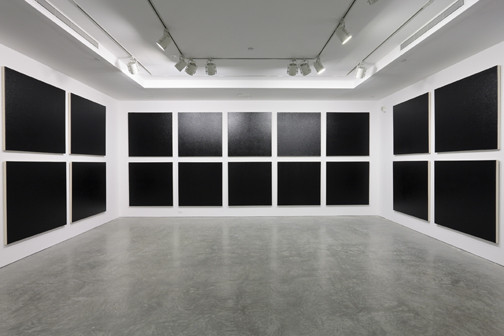 Leo Koenig Inc. is delighted to present a solo exhibition of new paintings by Olivier Mosset in collaboration with his simultaneous exhibition at Mary Boone Gallery. As an artist whose career has spanned four decades, Olivier Mosset first attracted international attention in the 1960’s when he started defining his paintings as simply art objects. He was soon participating in the group BMPT (Buren, Mosset, Parmentier, Toroni). BMPT presented work in simple and evident forms, aiming to separate the illusionist, mythical, historical and referential weight from their work. They were interested in the democratization of the art object, wresting it from strategies that they saw as elitist. Notions of authorship and originality were dissected, and a keen emphasis was often placed on the collaborative gesture.

Mosset has never wavered from his stance of forcing the consideration of the art object at face value. Yet Mosset’s work, and the artist, when speaking about his work, are very understated. They are of course, “only paintings.” And while no artist can totally avoid commodification, Mosset has always insisted on a fierce autonomy with regards to defining his own work, resisting his own incorporation into the art-world.

For this current exhibition, Mosset has anchored the show by presenting 40 identically sized black paintings. Using a material usually reserved for industrial application (specifically truck liner paint), Mosset has created incredibly seductive fetish objects that defy categorical assumptions. Appearing as perfect squares, glossy and textured, the paintings, en masse, are suggestive of the “black hole” of the art market, which sucks everything and everyone that gets close to it into its infinite core. The death of the avant-garde, issues of value and critical rebuttal all rotate within a feedback loop of repetition, only exemplified by the interaction of the works within the space. It is here that the collaborative gesture reigns, the paintings collaborate with the space, and the viewer, independent of affectation. The sheer visual pleasure that these objects evoke is perhaps its own reward.

Olivier Mosset’s exhibition history spans decades and he has been included in countless Museum shows, private galleries, and institutions from the Fifth Biennial of Paris at the Museum of Modern Art in Paris in 1967 to the Whitney Biennial in 2008. Today his work is as relevant as ever while he inspires another generation of young artists to think differently about their own art practice and the parameters of commodity. Olivier Mosset lives and works in Tucson, AZ and in NYC.