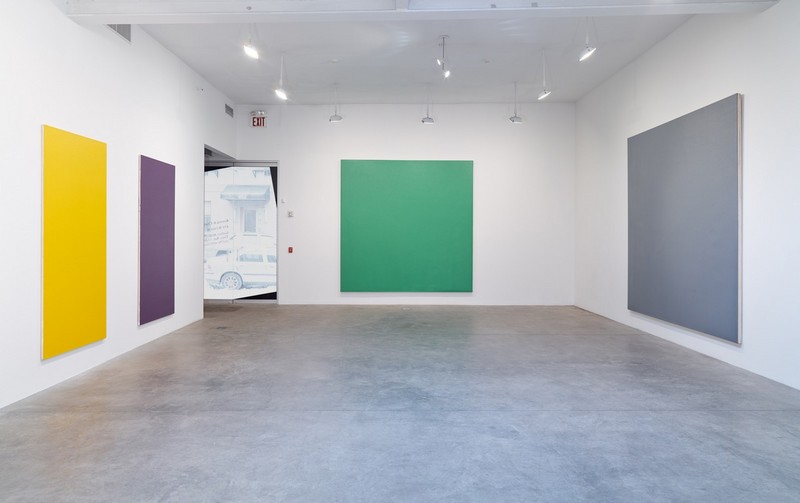 Mosset’s radical approach to painting first captured international attention in the late 1960s, when Olivier Mosset joined Daniel Buren, Michel Parmentier, and Niele Toroni to form the “non-group” BMPT in Paris. BMPT aimed to distance the act of painting from its display, formal abstraction from myth, and singular authorship from value. BMPT criticized the Modernist canonization of “pure painting”, as well as the institutional framework of the art world at large. Highly collaborative in practice, the artists often conflated their own identities through public performances in which they produced artworks in tandem.

In his current work, Mosset continues to mine these themes. The four largest canvases on view each pay homage to an influential figure or peer that the artist has encountered over the course of his international career, from Bern, Switzerland, to Tucson, Arizona, to New York City. Respectively, Alfred Leslie is green; Robert Breer is blue; Alex Hay is brown; and Duane Zaloudek is grey. Bearing the names of other artists, these paintings playfully entice the question: who is the maker? Mosset’s signature, whether real or imagined, is not his concern.

All paintings exhibited in the gallery employ the use of polyurethane, a highly durable industrial material often used as truck-bed liner, which results in dense and grainy surfaces. Unmarked by gesture, Mosset’s monochromes engage a materialist sensibility while remaining tethered to art historical discussions about appropriation and the readymade.

Olivier Mosset’s (b. 1944, Bern, Switzerland) work has been included in exhibitions presented by museums, private galleries, and institutions, such as: Manifesta 10 (2014), the Whitney Biennial (2008), the Fifth Biennial of Paris, the Lyon Biennial (2003), the Times Square Show (1981), and the Museum of Modern Art, Paris (1967). His work is represented in numerous public collections including: Albright-Knox Art Gallery, Buffalo; Centre Pompidou, Paris; Migros Museum, Zurich; and Musée des Beaux Arts, La Chaux-de-Fonds, among others. The artist lives and works in Tucson and Brooklyn.
www.koenigandclinton.com