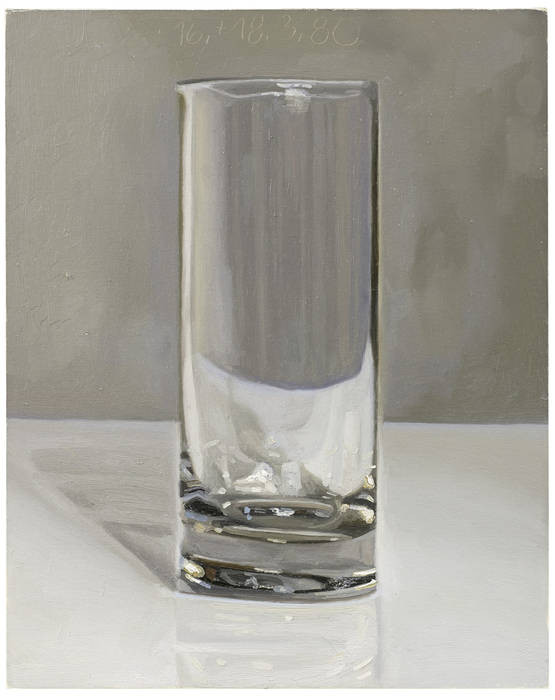 Koenig & Clinton is pleased to announce Peter Dreher: Day by Day, Good Day, a historical exhibition presenting paintings from 1974–2013. Dreher began his series Tag um Tag Guter Tag (Day by Day, Good Day) after painting his first glass in 1972. Dreher continued rendering a single empty water glass repeatedly, by day and by night, and has continued doing so over the course of several decades. The title of the series is linked to a Zen Buddhist maxim that espouses the equanimity of all things and objective perception of the world. Schooled as a figurative painter, the artist has remained steadfast to this commitment over the years, painting the same glass, within the same surroundings, from the same angle every day. To date, the series includes nearly 5,000 individual paintings.

Often compared to artists such as On Kawara and Roman Opalka, who work with repetitive signs, numbers and motifs, Dreher reflects on the transience of time through everyday objects. Dreher’s use of repetition and seriality, emblematic of today’s conceptual art landscape, run parallel to the artist’s fascination with the act of painting itself. Dreher approaches each work in the series as if for the first time, allowing the banality of his subject to give way to the revelation of its most subtle nuances exposed by repetition. Upon encountering the hundreds of glasses presented in Day by Day, Good Day, the viewer begins to notice slight changes in light, a glimmer of the studio’s rear window caught in reflection, at times a faint image of the artist looking back.

Dreher challenges contemporary art’s quest for innovation and interpretation, delving into the meditative singular as a nomad that curiously returns home each day, experiencing it anew. Indeed, Dreher’s impetus for the series is grounded in a common feeling of rootlessness that persists in the human condition. Remarking that the only hours of his life when he is truly ‘quiet’ are those spent painting, Dreher’s continual return to this specific familiarity is, for him, coming home.

The selection of historical and recent paintings on view at Koenig & Clinton coincides with a parallel exhibition of Dreher’s paintings at OSMOS ADDRESS (April 16–May 30), where Peter Dreher will discuss his work in a public conversation on April 16th at 7PM. On Saturday, May 10, between 5­–7 PM, Koenig & Clinton will also host a reading with Lynne Tillman from her most recent collection of essays, What Would Lynne Tillman Do?.

Peter Dreher (b. 1932, Mannheim, Germany) studied at the State Academy of Fine Arts at Karlsruhe from 1950 to 1956, and was Professor of Painting at the State Academy, Karlsruhe, from 1968 to 1997. During his professorship, he taught and influenced a number of acclaimed artists, including Anselm Kiefer. Solo exhibitions of his work have been presented at institutions internationally including Milton Keynes Museum, Great Britain (2013); Landesvertretung Baden-Würtemberg, Berlin (2012); Musée d’art moderne et contemporain, Geneva, (2011), Museum Erfurt, Germany (2008); Athens Biennial (2007) and Staatliche Kunsthalle (Baden-Baden) (1977). The artist lives and works in Wittnau, Germany.
www.koenigandclinton.com