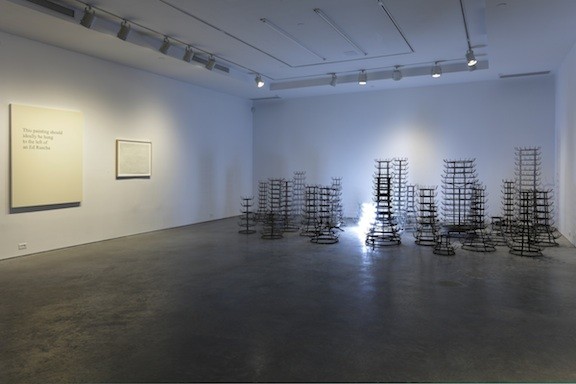 Eponymously titled, "Problem Play" takes its name from the 19th-century theatrical category of dramas that focused on controversial social issues. Problem plays commonly feature highly developed and morally conflicted protagonists. They are characterized by shifts between dark psychological drama and guileless comic material as well as irresolute denouements. The artworks assembled for this exhibition operate within the richly complex domain of the problem play, often employing dark humor to undermine hegemonic conventions and to expose issues of topical relevance.

Conceptual artist Ken Lum has devoted three decades to depicting tensions between personal experience and external classification. "Shirley's Bakery" (2001) is an apt example of the discomfiting convergence of public and private realms: in this work the borrowed text and graphic signage clash to strikingly morose effect. Less dark (or arguably more, given the current state of U.S. politics) is the pithy work of Ed Ruscha whose masterful interplay of flat-footed text derived from the American vernacular is evidenced here by "America Has Three Climates: Cold Hot Moderate" (1977). In Jonathan Monk's deadpan work "This Painting Should Ideally Be Hung To The Left Of An Ed Ruscha" (2004), the artist piggybacks on Ruscha's public stature. Monk playfully validates his own artistic merit while expressing a more vulnerable yearning for his work to be seen. Also playing upon art historical predecessors, Bethan Huws turns Duchamp's readymade on its head while simultaneously reinvesting the object with aesthetic potential.

The whimsical formal elements in works by Pavel Pepperstein, Lara Favaretto, John Armleder, and Arnold Odermatt serve as a foil to the darker facets of Problem Play. In Pepperstein's series of desert drawings, the legendary frontiers of the American West are transformed into outcast wasteland through which gangsters, aliens, fallen religious leaders and Henry Kissinger are forever doomed to wander aimlessly. Favaretto's "Absolutely No Donations" (2009) - a cube made of confetti - serves as a symbol of resignation and loss as the minimalist monument declines beyond repair. Armleder's "Untitled (Furniture Sculpture)" (1994) is comprised of freshly potted flowers that line the Gallery's walls and are watered and fed over the course of the exhibition. Shards of glass lie in the foreground and bar the viewer from touching or smelling the flowers, further insuring the vitality of these living plants. This violent undercurrent also runs through Odermatt's photographs of vehicular mishaps along the treacherous and quiet roads of Niwalden, Switzerland. Complicating what appears an objective interpretation of someone else's tragedy is an underlying comic twist.

An increasingly sober ambivalence overtakes the jovial intoxication of Andrea Fraser's "Kunst muß hängen (Art Must Hang)" (2001) performance. A single channel video projection depicts the artist reciting verbatim a memorized drunken, impromptu speech (delivered in German) by the late Martin Kippenberger. In what has been described as a re-performance of a performance, Fraser's "Kunst muß hängen (Art Must Hang)" at once limns the posturing that is expected of male artists while also recognizing Kippenberger's predicament of responding to such expectations. Fittingly allegorical, the speech relies upon the wisdom of the Shakespearean jester, or fool.
www.koenigandclinton.com