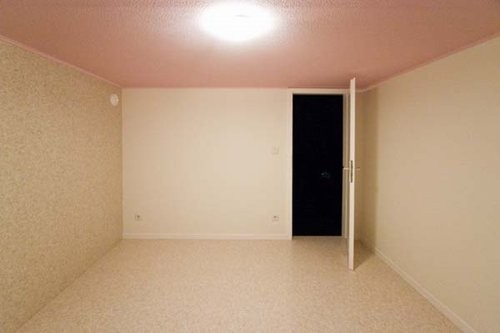 The exhibition „Doublings“ opening on the 28th of November simultaneously at Konrad Fischer Galerie in Düsseldorf and Berlin is a special project of the german artist Gregor Schneider (born 1969 in Rheydt). For the first time the gallery will present two almost identical exhibitions running parallel in both cities.

After the „Doublings“, exhibitions at the Franz Gertsch Museum in Burgdorf (Switzerland) and at the Museo d’Arte Contemporanea di Roma and together with the new exhibition „END“ at the Museum Abteiberg in Mönchengladbach (Germany) we will exhibit rooms, sculptures and films within a completely dark environment. As practiced in previous exhibitions the visitors will be kindly asked to enter the spaces alone, one by one.

The idea of „Doublings“ and repetition can be traced back within the oeuvre of Gregor Schneider when he started to re-arrange the rooms of the Haus u r at Unterheydener Street in Möchengladbach-Rheydt followed later on by a large installation at the German Pavillion for the Venice Bienale in 2001 (which was awarded the „Golden Lion“). Other exhibitions including the installation „Das letzte Loch“ in Rheydt and Milano and the project „Familie Schneider“ (2004) at the Walden Street in London’s East End then followed. With his artistic strategy Schneider is able to gain unusual access to fundumental questions of how space is perceived, what artistic originality means, and how contemporary art can be connected to reality. The artist presents an isolated and often unsettling situation to the viewer who is forced to experience himself and the spaces around him with all its possible psychological connotations.
www.konradfischergalerie.de