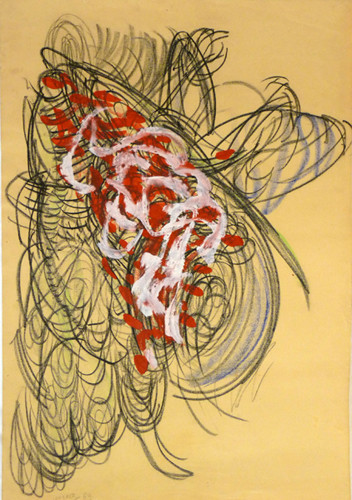 Mario Merz has to be considered as being the principal representative of Arte Povera ? one of the most influential European postwar movements in art which includes references to Conceptual Art, Land Art, Informel and Art Brut and features works by Giovanni Anselmo, Alighiero Boetti, Per Paolo Calzolari, Gino de Dominicis, Giuseppe Penone, Michelangelo Pistoletto and Gilberto Zorio.

Though the oeuvre of Mario Merz is, more or less, connotated with his iconic igloos made of stone, glass and brushwood as well as with his neon Fibonacci numbers the actual carreer of the self-taught artist began as a painter.

Along with his early oil portraits executed in 1956 and 1960, Konrad Fischer Galerie and the Estate of Mario Merz are presenting early abstract paintings including vegetative and animalistic motifs. In addition, we show the wall-size "Pantere sul cono" (1978) which has been exhibited before at Stedelijk Museum Amsterdam and at Guggenheim Museum, New York.
www.konradfischergalerie.de