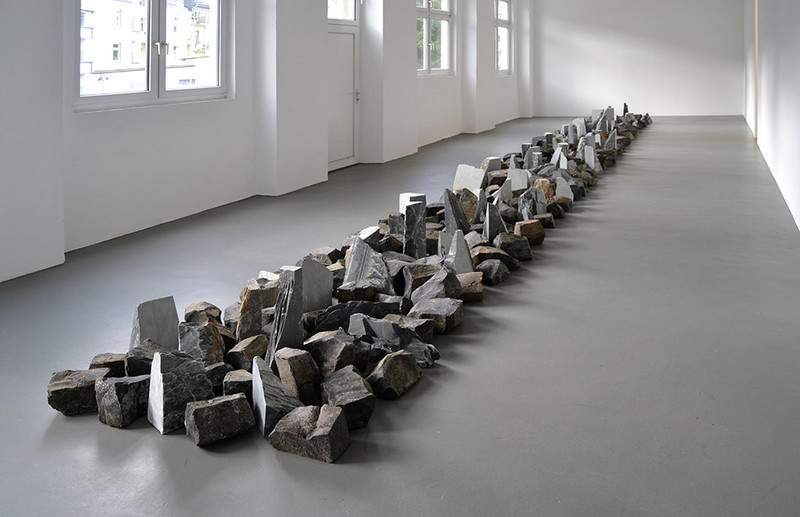 The art of Richard Long is about walking in landscape, about the experience of space, time and distance. During his nature hikes in all parts of the world, he creates artworks made of in-situ found material like stones, water, wood and mud or the trail itself transforms into an artwork. The walks and hikes are very different. They can be made crossing a specific distance - place to place, coast to coast - or following an in advance determined timeline - hours, days, number of steps, or cosmic events, for example a lunar eclipse.

Richard Long’s sculptures and wall works are based on simple geometric, timeless and archaic structures - lines, circles, spirals and squares made of different stones, driftwood, turf or osiers. In his text and photographic works, Long is keeping records both of his walks and of the artworks created en route and usually left for weathering and disappearance.
He describes his artistic language as kind of universal. "It' s a sort of cliché but it's true in some way. My work is about the characteristics of the planet I live on. Water, stones, mud, sun, snow, wind, mountains, walking, gravity - all of this is universal. My language is everything we share, not the things that make us different."
For his solo show at Konrad Fischer Galerie Richard Long presents new works made of basalt and slate along with photographic and text works.

Richard Long was born in 1945 in Bristol where he still lives and works. Already at age 23 he showed at Konrad Fischer in Düsseldorf, it was his first solo exhibition. The works of Richard Long have been shown at documenta 5 and documenta 7. In 1989 he received the Turner Prize and in1996 the Wilhelm Lehmbruck Prize. In 2009 he was awarded the Praemium Imperiale from Japan.
www.konradfischergalerie.de