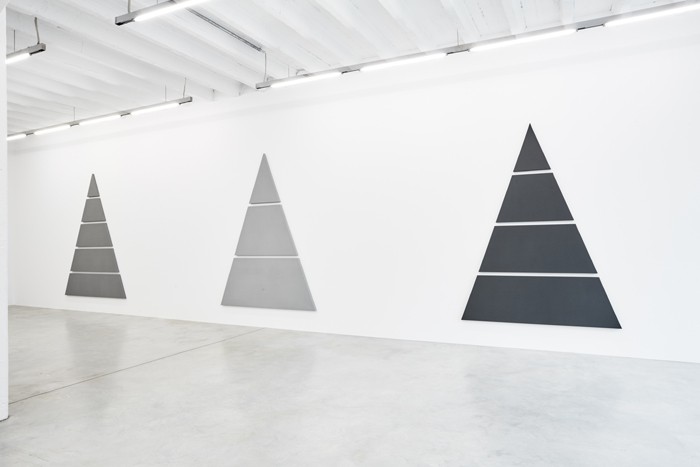 ‘I want my paintings to be: abstract, direct, urban, basic, modest, pure, simple, silent, honest, absolute,’ says Alan Charlton of his work. Born in Sheffield (UK) in 1948, he has been producing exclusively monochrome grey canvasses since 1970, and has been exhibiting regularly at Konrad Fischer Galerie since 1972.Alan Charlton conceptually explores the possibilities of painting using his own predetermined system, where brushstrokes and individual painting style are absent. Variation exists only in the differences in grey tones, canvas forms and sizes. Each canvas is completely monochrome. The depth of a traditional canvas frame, 4.5 cm, forms the underlying structure of all of his works. The dimensions of each canvas, as well as the distances between them, are always multiples of 4.5 cm.

Despite strict adherence to this rule, a surprising formal diversity can be seen in Charlton’s work. Variations of the Slot, Hole, Line, Cross, Border, Channel and Grid Paintings were still anchored to the traditional rectangular canvas, which he moved away from in 2012 with the introduction of his Triangle Paintings. The division of the triangle into horizontal canvasses of equal height, as shown in this exhibition, can be seen to represent a consequent continuation of his earlier work. Central to all of his series is the relationship of the canvasses to the wall and exhibition space.