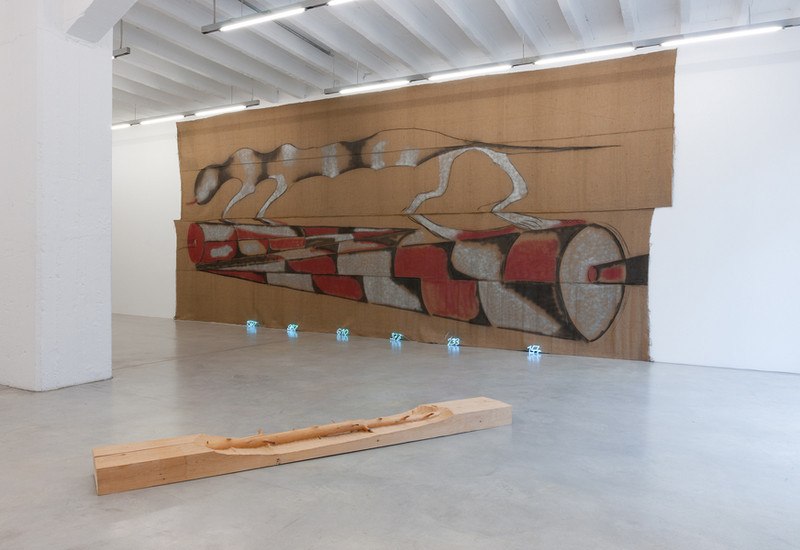 Konrad Fischer Galerie Berlin is pleased to announce the opening of an exhibition with works by Giovanni Anselmo, Jannis Kounellis, Mario Merz, and Giuseppe Penone. In 1970 Mario Merz had his first solo exhibition with Konrad Fischer and since then the gallery has presented works by artists who were part of the so-called Arte Povera movement.
The term ‚Arte Povera’ was coined in 1967 by the curator Germano Celant. Most of the artists belonging to the group were Italian and using simple, everyday materials like wood, earth, stone or steel. Through simple means this group of young artists tried to reduce the distance to the viewer, break open iconographic conventions and return to essential questions in a society driven by consumerism and blind faith in progress.

Giuseppe Penone’s work often begins with the touch of an object or a material. The mimesis of natural processes and an investigation of the relationship between man and nature remain central to his practice. The tree is a recurrent motif in his work. For Ripetere il bosco - frammento 6 (2007-2008) the artist peeled, out of a massive wooden block, the structure of its growth. Spine d'acacia – contatto 10 settembre 2009 (2009) shows many spines of an acacia spreading across a white canvas.
Seen from a distance the spines configure the fingerprint of the artist.

Giovanni Anselmo investigates, using various media, fundamental questions of art. The work Senza Titolo (1984-91) plays with the natural force of gravity. Two heavy stones are placed on the front and back side of a large white canvas forcing gravity to a lasting halt.

The work of Jannis Kounellis ranges from painting and collage to large installations, often using found or metaphorically charged materials. With his participation in the exhibition „Arte Povera e IM Spazio“ in Genova in 1967 Kounellis established himself early on as an important artist of the Arte Povera movement.

The work of Mario Merz is best known to a broader audience for his large igloos built out of various materials and oftentimes include a Fibonacci-series of neon numbers. Besides these iconic works Merz has developed a wide-ranging ouevre including paintings, collages, large-scale drawings and assemblages. We will present several wall-related works by Merz from different periods.
www.konradfischergalerie.de