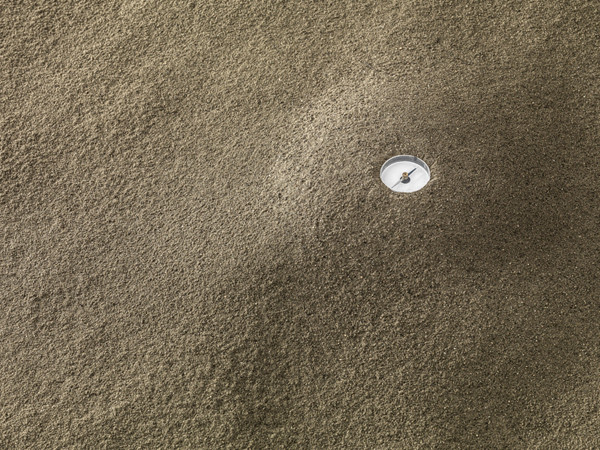 Konrad Fischer Galerie Berlin has the pleasure to announce “While earth finds its bearing and the light focuses, ultramarine blue appears towards overseas”, a solo presentation of the work of Giovanni Anselmo. The exhibition opens for Gallery Weekend Berlin on May 1st and runs until August 1st. The show will be complemented by a small group of works on paper and collage by Giovanni Anselmo, Jannis Kounellis, Mario Merz and Giuseppe Penone.

Even if it were just for its title, Giovanni Anselmo's installation at Konrad Fischer Galerie seems to offer an open invitation to wander. The journey has a destination – towards overseas – and sees two of mankind's most indispensable allies, earth and light, readying themselves to become steadfast companions. Ultramarine blue, the exquisite, beguiling appearance brought to us from another world hovers over the scene, tantalizingly present and absent all at once.

Ever since the artist became aware of a very real and tangible connection between himself and the universe – the life-changing Stromboli experience of August 16, 1965 – Giovanni Anselmo has created his oeuvre with and around the energies and forces that are part of this cosmos. The materials are often earth- and nature-bound. The form dependent on the inherent characteristics of the materials used. The overall sense one of being guided by an energy intenser than one's own or the artist's. His is not an art that attempts to crystallize these presentations, to freeze them into time and space as it were. On the contrary, in his work the finite acts as a mere placeholder for infinity, the visible yearns for its prefix 'in' and the present moment is only present as a particular of eternity.

In her essay for the 1995 exhibition in Santiago de Compostela, Gloria Moure stated: “[...] Giovanni Anselmo understands that art is love, politics, ethics, life and participation in the 'global landscape' [...] Evidently he is not the only one who transmits this message to us, but we would be hard put to find anyone who does so with such purity and radicality.”

Giovanni Anselmo (b. 1934) lives and works in Turin. His work has been widely exhibited and is part of renowned international institutional and private collections. In 2013 the Kunstmuseum Winterthur in Switzerland staged a major retrospective exhibition. He was awarded the prestigious Golden Lion at the Venice Biennale in 1990.
www.konradfischergalerie.de