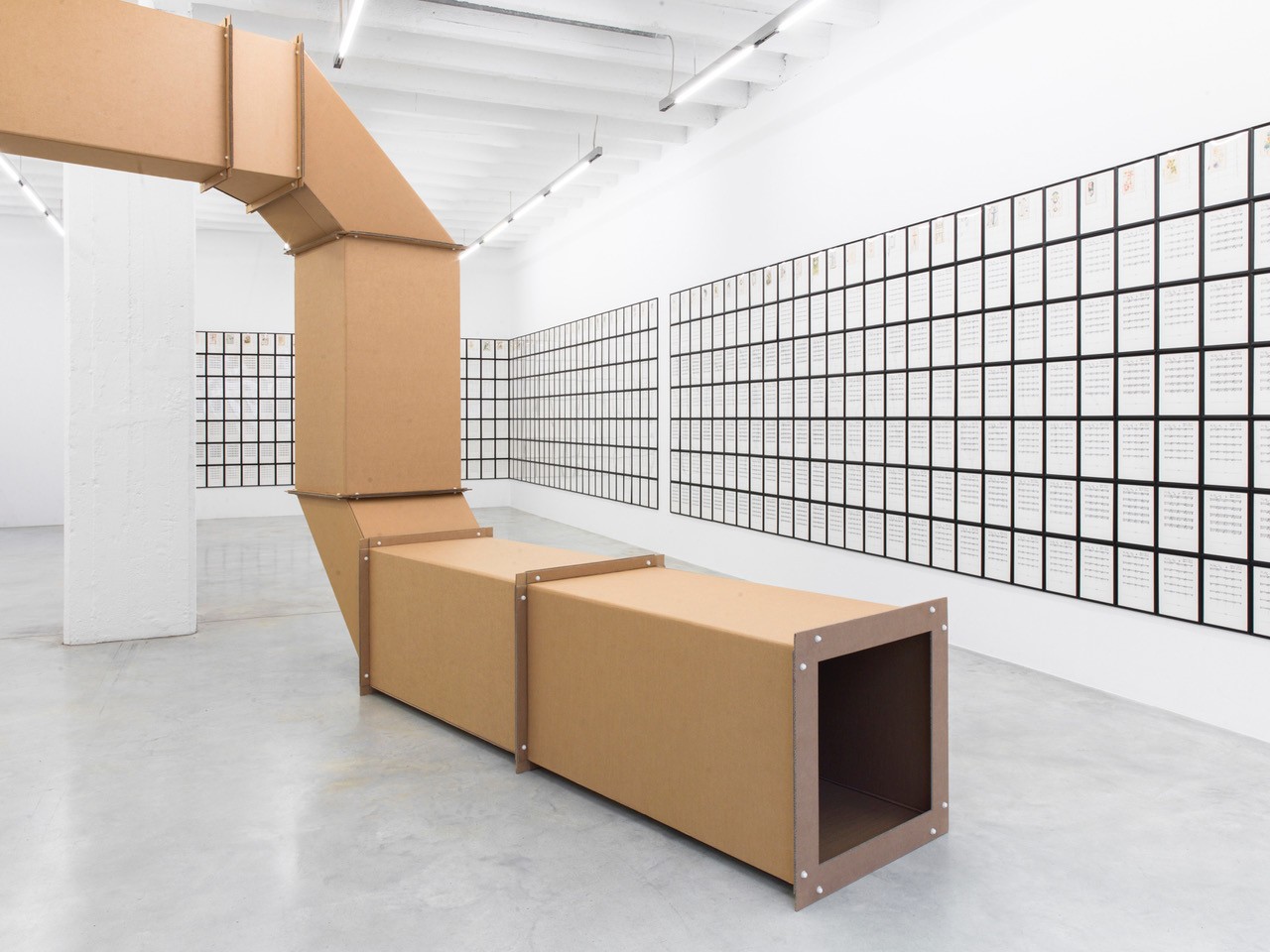 50 years of Konrad Fischer – in 2017 Konrad Fischer Galerie celebrates its continued presence over the past 50 years with a series of exhibitions reflecting the development and art historical relevance of the gallery, which was founded in Düsseldorf in 1967. As one of the highlights, a comprehensive anniversary exhibition curated by Friedrich Meschede will be presented in September, running in parallel at both locations in Düsseldorf and Berlin.

The anniversary year starts off in Berlin with a look back to the early days of Ausstellungen bei Konrad Fischer. Hanne Darboven and Charlotte Posenenske were presented in the second ever exhibition in 1967, with Darboven’s 120 drawings Konstruktionen occupying the walls, and Posenenske’s work Square Tubes Series DW, comprised of four different serial elements in corrugated cardboard, winding through the narrow exhibition space of the former gateway of Neubrückstr. 12 in Düsseldorf.

The current exhibition presents two of Hanne Darboven’s extensive works in their entirety, Wunschkonzert Opus 17A und B, Opus 18A und B, and 42/100 Ein Jahrhundert ABC.

Wunschkonzert (1984) refers to a Sunday radio show on the German channel NDR, which invited listeners to request pieces of music to congratulate friends and relatives on their birthdays and other special occasions. The work, encompassing a total of 1009 pages, is divided into four parts; Opus 17A and B, and Opus 18 A and B. Each opus is comprised of 36 poems, structured vertically in rows of 7, and a title page collaged with a confirmation greetings card. In the same year Hanne Darboven wrote a score for the Wunschkonzert as double bass solo.

The work 42/100 Ein Jahrhundert ABC (2002), comprising 72 panels, is arranged in three parts. According to her own notation and calculation system which she developed in the late 60s, Hanne Darboven uses various graphical representations to depict the timespan of the 20th century. This work was shown in 2004 at the Kestnergesellschaft in Hannover, and in 2014 in the exhibition ‘The Order of Time and Things, The Homestudio of Hanne Darboven’, at the Museo Nacional Centro de Arte Reina Sofia, Madrid.

’The series DW (bei Fischer) is made of corrugated cardboard, which is light and cheap: a material to be used’, writes Charlotte Posenenske in her 1968 manifesto, which was published in Art International and announced the end of her artistic career. More industrial product than artwork; not ‘individual pieces for individuals’, but an economically sensible, serial, foldable and combinable object. The same is true of the precursor to Series D, a construction kit of 6 different elements in galvanized sheet steel. The arrangement is simple, rational and participative.

The Square Tubes Series DW was presented in 1967 in the now legendary exhibition ‘Dies alles, Herzchen, wird einmal Dir gehören’ (‘All this, sweetheart, will one day be yours’) at Galerie Dorothea Loehr in Frankfurt am Main, followed immediately by the exhibition at Konrad Fischer, as well as in 1968 at René Block in Berlin. The Square Tubes Series D were first presented in 1967 at the Kleine Galerie Schwenningen and in 1968 at art & project in Amsterdam. Following the death of Charlotte Posenenske in 1985, Series D and DW have been shown in various locations including Frankfurt airport, Frankfurt central station and the Frankfurt wholesale market hall, and at MMK Museum für Moderne Kunst Frankfurt am Main, at Kunstsammlung NRW in Düsseldorf, at the Chinati Foundation in Marfa, Texas, at Palais de Tokyo, Paris, at MoMA Museum of Modern Art, New York, at TATE Modern and at documenta 12.

This exhibition was produced with the generous support of the Hanne Darboven Foundation. For the realization of the project with works by Charlotte Posenenske we owe our deep gratitude to Dr. Burkhard Brunn and Galerie Mehdi Choaukri.
www.konradfischergalerie.de