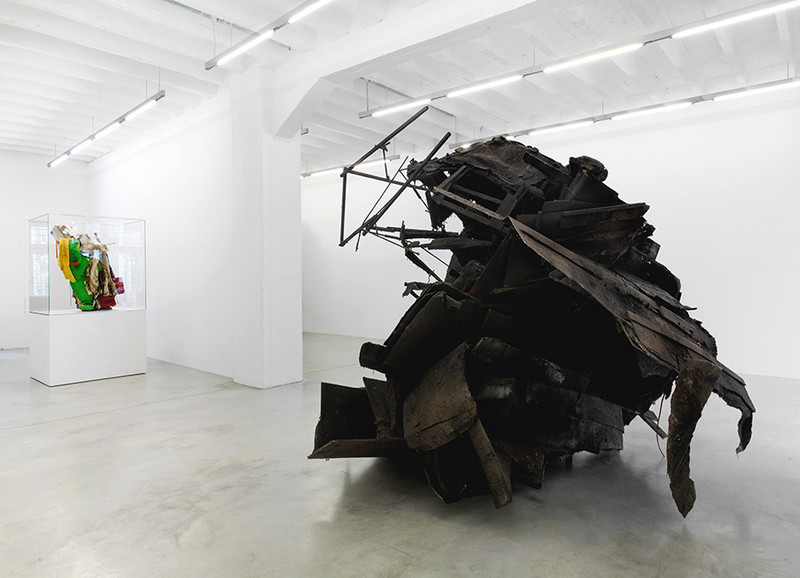 In his second solo exhibition at Konrad Fischer Galerie Berlin, Belgian artist Peter Buggenhout presents a group of new works under the title Für Alle und Keinen (For All and None).

Chosen for its strong resonance with his own work, the subtitle of Friedrich Nietzsche’s Thus Spoke Zarathustra contains an explicit message that sits at the core of the artist’s oeuvre. His works reject all reference, all symbolism. Open to every possible form of interpretation, they remain stubbornly autonomous, without imposing meaning or definition. They exist for all and none. For all and for themselves.

At Konrad Fischer Galerie Berlin, Peter Buggenhout will - for the first time - present a large site- specific installation from his new series entitled On Hold. With this new work group Buggenhout continues his quest for abject material; existing elements that have lost every connection to their original purpose. In case of On Hold, parts of colorful, inflatable plastic bouncy castles are incorporated into the work and have been manipulated beyond recognition so as to form an object that balances on the boundaries of expansion and restriction. The growth process of this series much resembles that of a tree as it is shaped both by its natural tendency to grow towards the light as well as the necessity to overcome the elements - natural or otherwise - that obstruct this direction.

The first floor focuses on two work groups that the artist has been involved with since the 1990s; Mont Ventoux, objects that consist of debris covered with treated cow stomach and The Blind Leading The Blind, the so-called ‚dust works’. Three objects of the latter group were recently shown during abc (art berlin contemporary).

Each series expresses in its own way Peter Buggenhout's belief that all human endeavor to understand reality, to decipher and shape it, is futile. It is the trusting acceptance of never fully knowing, predicting or mastering the world that surrounds us that forms the habitat of his undefinable, open-ended and forever ungraspable objects.
www.konradfischergalerie.de