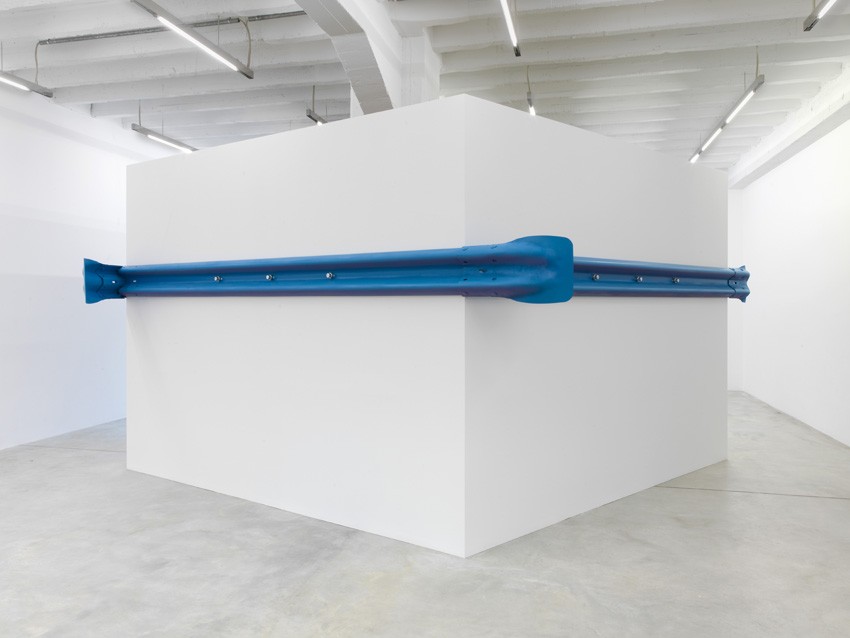 Leitplanken (German for guardrail or crash barrier) belong to a category of functional objects that are generally perceived at the periphery of our experience. In optical theory this phenomena of following (at the edges of our field of vision) a moving object is called "motion blur" or "temporal smear". In this exhibition Rita McBride investigates a class of object that is essential to our ability to navigate the world, to follow a trajectory. Leitplanken are guidance objects which merge towards the horizon line at high speeds and with a serpentine complexity.

The Futurists, Marinetti in particular, elevated the idea of the "moving object" to an ideal. Speed and momentum became synonymous with beauty. For the Futurists, objects in motion are not separate from one another or from their surroundings, they merge and blend. In the real world Leitplanken are stationary, repetitive and banal, but when they are perceived from the vantage point of a moving object they acquire the attributes of the futurist ideal. They merge and blend, they smear and blur and yet they guide and follow. So, Leitplanken for McBride also define the contemporary relationship between viewer and object.

In determining a support structure for Leitplanken determined by the standard length of guard rails Rita McBride selected a pentagon as a configuration that implies movement - the opposite of a white cube container. Pentagons are used in a variety of functions and hold just as many meanings as functions one can find, for example, in the structural design of Renaissance defense fortification, the fortress-like pattern of the Pentagon near Washington, D.C., in organic chemistry, in the problem of rational tiling in Mathematics, or in the "magic pentagon" balancing several parameters in economics. The pentagon seems to be a highly "flexible" and dynamic geometry - lending itself to pleasing the human in spirit and form.