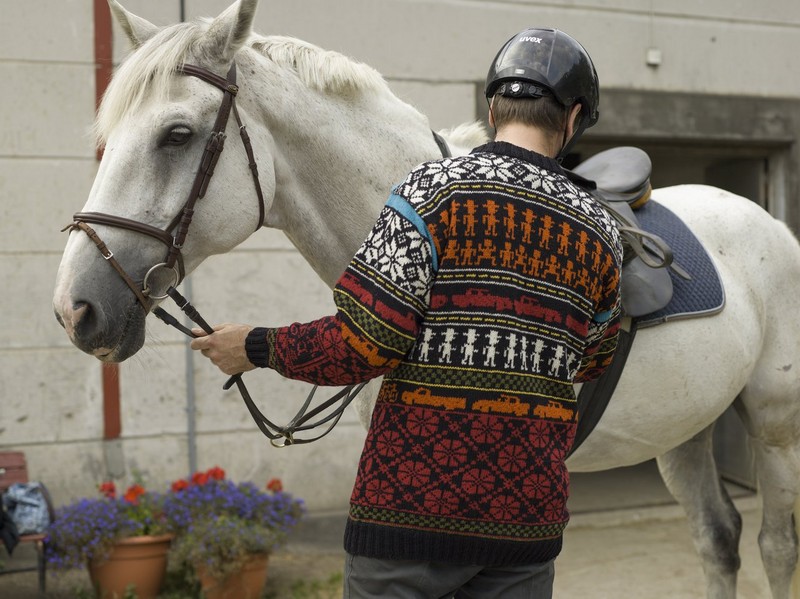 Some would say that people’s persona or identity is mirrored in the clothes they wear. We show part of ourselves, who we are and how we live through what we wear. Having said that, it should also be stated that we seldom display direct social or political opinions, questions and/or commentary on our clothes.

However, the Los Angeles based artist Lisa Anne Auerbach proudly does the opposite. Auerbach knits sweaters with slogans, words, graphical symbols that comment on her views in a straightforward, satirical and political way. Sentences like, ‘Where there’s drink there’s always damage’, ‘Would you buy a used car from this man?’, ‘Is there more freedom here?’ or ‘I used to be part of the solution’, and on the backside, ‘... now I’m part of the problem’ are a few of Auerbach’s statements knitted into the sweaters.

Lisa Anne Auerbach’s solo exhibition at Malmö Konsthall will not appear as an ordinary exhibition. The exhibition consists of 25 handknitted sweaters worn by all of Malmö Konsthall staff. The designs are all made by Auerbach, but this time she has included and mixed her own words and statements with chosen statements from staff and knitters. As the staff is wearing the sweaters the audience will have to be patient to get to see them all and possibly get closer to the staff than usual – simply to look at and read the works. In this way the level of intimacy between audience and staff will change. Auerbach has collaborated with eight knitters from Denmark during the process.

Auerbach has chosen the a knitting technique called Hønsestrik, a style invented and named in Denmark by Kirsten Hofstätter in the early 1970s aiming to (a knitting style created in the 1970’s in Denmark. Kirsten Hofstätter invented the word and style of knitting in the early 1970’s to) break the tradition and norms of knitting, and furthermore to move away from machine produced sweaters and make knitting more accessible to people. It was an anti-authoritarian style abundant with colors and patterns, and at the same time a feminist comment on the (male dominated) political magazine Hanegal. Hofstätter has published 3 books about Hønsestrik.

The yarn is sponsored by Filcolana and the tiles by CC Höganäs.

Lisa Anne Auerbach is an interdisciplinary artist living and working in Los Angeles, CA. Focusing primarily on knitting, photography and publications, her work has been exhibited internationally since 1996. Select solo exhibitions include Election Sweater Project at the Aspen Art Museum, Aspen, CO, Torn Porn at Gavlak Gallery, Palm Beach, FL, and Take This Knitting Machine and Shove It at Nottingham Contemporary, Nottingham, UK. Select group exhibitions include Nine Lives at the Hammer Museum, Los Angeles, CA, Cottage Industry at the Baltimore Contemporary Museum, Baltimore, MD, and The Way That We Rhyme at the Yerba Buena Center for the Arts, San Francisco, CA.

She is the recipient of the 2009 Louis Comfort Tiffany Foundation Award, a 2007 California Community Foundation Fellowship for Visual Artists, and a 2013 City of Los Angeles (C.O.L.A.) Individual Artist Fellowship. She received her BFA from Rochester Institute of Technology, Rochester NY, and her MFA from Art Center College of Design, Pasadena, CA. Her work is represented by Gavlak Gallery in Palm Beach, Florida, and she is an Assistant Professor of Art at Pomona College in Claremont, CA.
www.konsthall.malmo.se