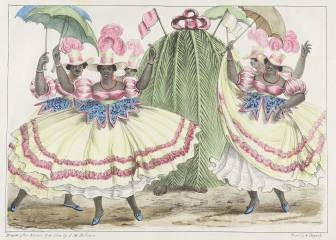 The exhibition Little Theatre of Gestures is about changes. Changes that we do to ourselves or to our surroundings. It attempts to examine and look at how we display these changes, the theatricality of objects and bodies, staged and in daily life. The artists Kutlug Ataman (b. 1961 in Istanbul), Inaki Bonillas (b. 1981 in Mexico City), Gerard Byrne (b. 1969 in Dublin), Jay Chung & Q. Takeki Maeda (b. 1976 in Madison, WI, and 1977 in Nagoya, JP), Rodney Graham (b. 1949 in British Columbia), Hilary Lloyd (b. 1964 in Halifax, UK), Kirsten Pieroth (b. 1970 in Offenbach, DE) and Susanne M. Winterling (b. 1970 in Rehau, DE) use a variety of medias to document identity and gender through subtle and staged gestures. Isaac Mendes Belisario’s (b. 1795 in Kingston, JM – d. 1849 in London) 12 hand-coloured lithographs Sketches of Character created in Jamaica in 1838 is a turning point in the exhibition, portraying masquerades, as well as tradesmen and labourers.
The exhibition is a collaboration with Kunstmuseum Basel.
www.konsthall.malmo.se