The Aesthetic of Disappearance 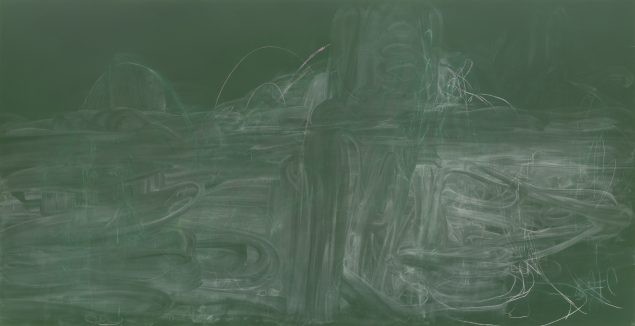 Curated by Per Haubro Jensen

Rita Ackermann’s work first appeared on the New York art scene in the early 1990s with her refined yet evocative representations of the female form. Her large paintings of nymphetish girls depicted with lines evoking both beauty and ugliness brought her widespread acclaim and made her a part of the cultural scene of the time. These early works are the point of departure for Ackermann’s recent body of work collectively titled The Chalkboard Paintings.

The exhibition at Malmö Konsthall – the first for Ackermann in Scandinavia – examines the relationship between these bodies of work created more than two decades apart, inviting the viewer to experience the different layers in the work. The expressive line, the representation of the figure, the mysterious bold gestures all create the dichotomy between the beautiful and the violent. To see the visible and feel the invisible, sense the gaps and disappearance. Over time diffusing any resemblance of a figure, on the edge of nothingness.

Ackermann recently described the process of creating her chalkboard paintings:
“These works are made by multiple erasures. What happens through the making is exactly what happens on a chalkboard in a classroom. A configuration or drawing is rendered on the black or green board; then it gets cleaned up for the next class. Since I apply the chalkboard paint on the canvases first, they must be stretched on the wall. The erasures are forceful and physical. I discovered that sometimes the more manic the erasure is, the more visible the drawing becomes underneath the layers of washed-­away chalk dust. A considerably “un­noble” material’s fragility and modesty – the chalk – turns out to be the greatest resistance.” *

Ackermann’s classical training at the Hungarian Academy of Fine Arts in Budapest and interest in philosophy have made an impression on her life and work. She is particularly influenced by the writings of Paul Virilio and his discussions on the logistics of perception and disappearance. The figures represented in her work are in essence classically composed in nature and entrenched in contemporary conceptual perspectives.

Rita Ackermann was born in 1968 in Budapest, Hungary. After her studies she moved to New York City in the early 1990s. She currently lives and works in New York. Her work has been featured in numerous solo and group shows internationally. In 2009 she spent several months in Marfa, Texas at the Chinati Foundation’s artist-in-residence programme, where she focused on the abstract conceptual elements of her work.