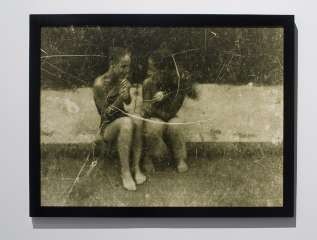 The exhibition SONIC YOUTH etc.: SENSATIONAL FIX focuses on the multidisciplinary activities of the groundbreaking experimental guitar band Sonic Youth since its formation in 1981. From day one, Sonic Youth has been exploring and mapping unknown cultural territories through their activities as a band and as four individual musicians, visual artists or cultural entrepreneurs, each member with his or her specific ties to and within the international cultural scene. The exhibition features the band’s collaborations with visual artists, filmmakers, designers and musicians, as well as a choice of other works selected by the band. Through the multidisciplinary output of Sonic Youth and related works by other artists in the exhibition, an alternative history of contemporary culture is being told, in which issues are explored such as teenage rebellion, adolescent wanderlust, gender, fame, fashion, sexuality, and religion.
The exhibition departs from an ample selection of Sonic Youth paraphernalia that illustrates their comprehensive heterogeneous output and collaborations with other artists, while at the same time it already introduces themes that are explored in depth in further sections of the exhibition. Among the materials exhibited are: artwork for Sonic Youth album covers, a selection of early flyers, fanzines, posters, and writings by the band members, as well as photos of the band by artists such as James Welling, Sofia Coppola, and Richard Kern.
By the early 1980s, an alternative scene emerged in downtown New York City in which music and visual art were tightly connected. Both the raw and rebellious attitude of punk and the atonal, violent guitar music of no wave inspired artists like Richard Prince, Lee Ranaldo and Kim Gordon to play in bands. Since that time, Sonic Youth has successfully combined the rebellious attitude of punk with experimental music and concept art. Works by artists who were active in the New York art scene in the late 1970s and early 1980s are combined in the show with works by succeeding generations of artists who are closely connected to the band. These artists include Dan Graham, Vito Acconci, Tony Oursler, Cindy Sherman, John Miller, Christian Marclay, Jutta Koether, Isa Genzken, Tony Conrad, Reena Spaulings, Maya Miller, and Rita Ackermann.
In the early 1980s, Sonic Youth performed for the first time on the West Coast, where they met and acquainted both musicians and visual artists. West Coast society of the late 1960s is an important point of departure for the creative work of many of these West coast artists like Mike Kelley, Todd Haynes, Dave Markey, Marnie Weber, Raymond Pettibon, and Cameron Jamie, who are in their work informed by the contrast of the glamorous world of Hollywood, radical subjects like Charles Manson and the aggressive Californian hardcore punk of the early 1980s.
The band’s interest in counterculture movements like the Beats and subsequent underground poetry movements resulted in Thurston Moore collecting broadsheets and visual art by poets and other alternative poetry publications. In the exhibition, works by Allen Ginsberg, William S. Burroughs and Ira Cohen are shown next to those by D.A. Levy, Joe Brainard, Gregory Corso, and George Schneeman.
Finally, in a pavilion especially designed for the exhibition by Dan Graham, Sonic Youth’s complete audio output, live recordings of late 1970 and early 1980’s bands recorded by Graham, and rare videos of Sonic Youth and bands from the era are presented.
SONIC YOUTH etc.: SENSATIONAL FIX describes the band’s 30 years of transversal projects, retracing the stages of their formidable artistic career which has been inspired by the ideal of a world outside the mainstream of mass industrial culture. The exhibition has been organised by Dutch curator Roland Groenenboom in close collaboration with Sonic Youth. It was produced by LiFE in St. Nazaire, and the Museion in Bolzano, in collaboration with Kunsthalle Düsseldorf and Malmö Konsthall.
An ample publication has been edited by Roland Groenenboom in collaboration with Sonic Youth and has been published by Verlag der Buchhandlung Walter König, Museion and LiFE. It is available in English. In addition to interviews, catalogue texts, and archival material, the catalogue includes two 7-inch vinyl singles. Each of the four sides is devoted to the work of one member of the band.
Sonic Youth gives two concerts while in Sweden, Wednesday 27 May in Malmö and Thursday 28 May in Hässleholm. Their new album, The Eternal, is released 9 June.
www.konsthall.malmo.se