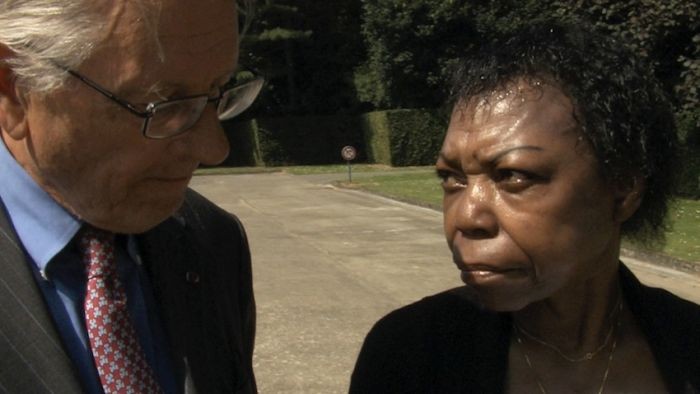 The Belgian artist Sven Augustijnen is well-known for his films. His most recent feature length documentary Spectres (2011) provides a critical portrayal of Belgium’s colonial past in Congo based on cultural and historical analysis.

Congo will always be associated in Sweden with the mysterious plane crash in 1961 that killed the UN secretary general Dag Hammarskjöld. Fifty years later Sven Augustijnen turns his camera to another dark chapter in the decolonisation of the Belgian Congo: the assassination of Patrice Lumumba, Congo’s first democratically elected prime minister.

The main character in Spectres is Sir Jacques Brassinne de La Buissière, a former high-ranking civil servant and protagonist in the political and humanitarian 'thriller' that unfolded after the hasty decolonisation decision, transfer of power and subsequent conflicts, up to the imprisonment and execution of Patrice Lumumba on 17 January 1961.

Jacques Brassinne wrote a doctoral dissertation on the sequence of events that led to this tragedy and was called to testify as a witness by the parliamentary committee of inquiry. Due to his position at the time of decolonisation and his thorough factual enquiries into the historical circumstances, he has, so to speak, a privileged standing as 'protagonist-narrator' who embodies the confusion of everyone affected by these traumatic and dramatic events, which relate to questions of 'responsibility' and 'guilt'. Through this travelogue Jacques Brassinne advances the evidence he has refined over thirty years and addressed during meetings and memorials with the last survivors, all of them witnesses or family members of the main protagonists.

The title Spectres refers to the French philosopher Jacques Derrida’s book Spectres de Marx (1993) / Specters of Marx. Derrida discusses the returning ghosts, the spectres of the past, which reappear in the present again and again. Augustijnen’s project shows that Europe has not yet come to terms with its spectres – colonial histories which still have an influence on our lives and our ways of thinking.

The exhibition presents different objects from Brassinne’s personal records: photographs from execution sites taken during the 1960s and 1980s, historical objects and audio clips. A comprehensive publication with background material, photographs and texts completes the exhibition, together with the piece Cher Pourquoi Pas? (2007). Here Augustijnen makes use of newspapers from the early 1960s to question the role of journalists in the course of the historical events and its portrayal, including a recent reflection on Dag Hammarskjöld’s death.

Sven Augustijnen (1970, Belgium) lives and works in Brussels. He studied at the Royal Academy of Fine Arts in Antwerp, the Hoger Sint-Lukas Instituut in Brussels, and at the Jan van Eyck Academy in Maastricht. His work is mainly focused on the tradition of portraiture and the fluid boundaries between fiction and reality, using a hybrid of styles and techniques. His films have been shown at exhibitions and festivals in Athens, Brussels, Fribourg, San Sebastián, Siegen, Rotterdam, Tunis, Tel Aviv, Tokyo and Vilnius, among others. In 2007 he participated in the Documenta 12 magazines. The film Spectres has drawn a lot of attention internationally and in 2011 Augustijnen received the Evens Arts Prize.